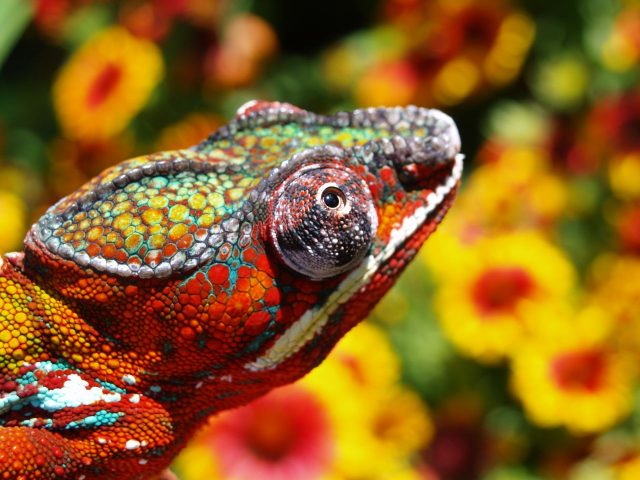 Color patterns are important features of lots of animals, having key functions in protection against UV irradiation, camouflage, shoaling or sexual selection. Color patterns in birds and mammals are generated by a particular type of cell called melanocyte which produces melanin and transfers it to the tissues of fur or plumage. In fish, amphibia and reptiles, skin coloring is generated by a particular cell type called chromatophore. These cells are able to retain a pigment and the distribution of different chromatophores with different pigments in the skin is what determines the final pattern.

Chameleons are also colored creatures and their patterns are also determined by the distribution of different chromatophores. However, chameleons have the fascinating ability of changing their skin color in different situations. Despite what most people think, they don’t change to camouflage themselves trying to match the color of their environment but they do it mainly during their social behavior. For example, chameleons tend to show red-like colors when trying to intimidate others, while males show lighter and multicolored patterns when courting females. But how is that amazing process possible? How is the animal able to change its color in demand?

Monitoring color change in a Panther Chameleon adult male under excitation upon presentation of another adult male in its vision field. The first frame of the movie is shown in the lower-right for a better visualization of the extend of color change.

For a long time, we have thought that chameleons achieved their color morphing through the expansion of colored pigments in their skin cells. However, very recently scientists from the University of Geneva have shown that the mechanism behind this process is surprisingly and unexpectedly different from what we though 1. Using different techniques and working in close collaboration with a team of physicists, Prof Michel Milinkovitch has discovered a new layer of cells beneath the pigmented skin cells. These new cells are quite different from regular cells since they contain in their interior lots of small close-packed nanocrystals made of guanine (one of the four key components of DNA). These nanocrystals are arranged inside the cell in a lattice (evenly spaced) and have the potential of behaving as the so-called photonic crystals, which can be sources of exceptionally bright and brilliant reflected colors that are generated from optical diffraction (i.e, these crystals are able to reflect different wavelengths depending on their relative position) 2.

After finding the presence of this unusual, crystal-containing cell type (called iridophore), the authors measured if the structure of the crystals inside these cells was changing when chameleons where changing their color. To do so, they did excite a male chameleon just by showing it another male competitor, and just that could shift the background color of its skin from green to yellow/orange, whereas blue patches turned whitish and red became brighter. Then they took samples of the skin from both states and studied by electron microscopy (very high resolution) the structure of the crystals. Amazingly, they found that crystal size inside iridophores does not vary but the distance among crystals does!

When the chameleon was calm, the crystals were arranged in a packed network which mostly reflected blue light. That blue light, in combination with the yellow light reflected from the pigment-based upper layer, showed a final reflection of green light (blue plus yellow). When the animal was excited by the presence of a competitor, the crystal pattern in the second layer became 30% less dense, which changed its reflection from the original blue to yellows and reds. Now the combination of the upper yellow and the new yellow/red from the second layer changes dramatically the final appearance of the animal to a new red/orange skin color which will helps the animal to compete with the other male. This process is completely reversible, the animal just has to rearrange the crystals inside the cells of the second layer to be really dense again and reflect blue light to go back to the original green color!

These new discoveries about the dynamism and organization in the chameleon skin are a great example of how biological scientists need more and more the help of other scientific disciplines, such as physics or mathematics, for solving current puzzles in biology. Physics can offer biology fundamental and theoretical explanations, new techniques to solve old problems, computational methods and models to predict molecular behavior and, for example, explanations like on how photonic crystals can work in the skin of chameleons to change animal appearance. Luckily, more and more physicists are becoming interested in biological problems (Janelia Farms is a great example) and we are starting to hear for the first time that “Biology is the new physics” 3. Optimistically, the gap between both disciplines will be increasingly less big in the future and this probably will help to solve difficult biological problems faster, hopefully including the cure of the some diseases of our society. Stay tuned!

Is your skin under fracking?