In 1912, a French chemist named Louis Camille Maillard published a paper to explain what happens when amino acids react with sugars at elevated temperatures1. And I guess you are thinking: so what? Well, it turns out that this chemical reaction is one of the most important flavor-producing reactions in cooking since produces what is popularly known as “browning”!. 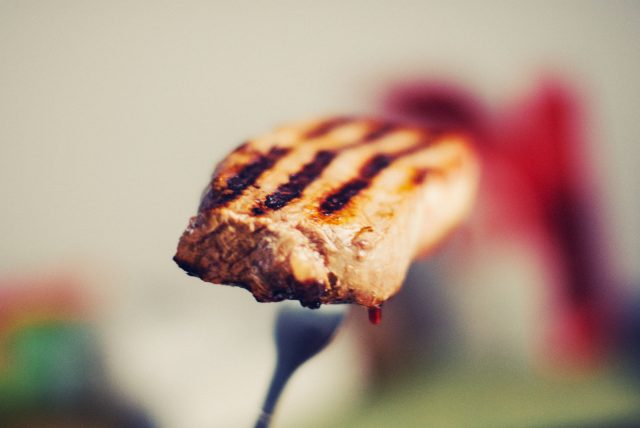 So when you cook protein-laden foods (e.g. meats or seafood) at high temperatures (always more than 150 °C) the amino acids from proteins and certain simple sugars that are present in that food are rearranged together chemically creating new compounds. These new compounds then arrange themselves in different types of ring structures that reflect light in a new way that gives the food its brown color. However, the color is not what is actually important. What are important are the new flavors and aromas created, which also come from the molecules produced in the food during cooking. The initial rings produced from amino acids and sugars keep reacting in more complex ways generating hundreds of new molecules that create different flavors in the chemical process that today is known as the Maillard reaction.

Although most foods can be “browned” by the Maillard reaction, the final flavor of each food is, of course, different. The reason is that amino acids and sugars that begin the reaction are different in different foods and, therefore, they generate different molecules that taste different (although in the end the general reaction principle would be basically the same). In addition, the Maillard reaction requires very high temperatures but dry surfaces, so if you try to get browning in the chicken breast you are cooking but you have a nice amount of water in your pan you certainly won’t get it! The reason is not that water inhibits the reaction, but that water will clamp the temperature as high as its boiling point (100 °C) which is not enough for the reaction to occur. If one wants to speed up the reaction, temperature of cooking can be increased to accelerate the evaporation of water and increase the rate of chemical reactions. However, temperatures should not be higher than 180 °C since at that temperature pyrolysis (burning) starts to occur and we all know that too much burning generates bitterness that can ruin your meal (and also produce end-products that are considered carcinogenic)2.

So actually this chemical reaction is a big part of our lives! Just to give a few examples, the Maillard reaction is responsible for the browning of bread into toast, the color of beer or toasted coffee, or the smell of fried bacon. Importantly, this reaction is not the same as caramelization, which also turns foods brown but following a different process. In the case of caramelization, the chemical reaction only occurs between sugars and usually requires higher temperatures.

However, it is important to know that the Maillard and caramelization reactions can be produced in the same type of food, each of them contributing differently with different flavors. A good example of this occurs when you have chopped onions in your pan. First the onions begin by sweating and softening, which is the consequence of breaking their cells and release their water. When cells break, they also release their content, a complex mix of sugars, proteins, and aromatic compounds. When water evaporates, caramelization and the Maillard reaction begin to take place, producing the reaction of sugars with sugars (caramelization) and sugars with proteins (Maillard reaction), making your kitchen smell really good.

So next time you cook you should remember the interesting chemistry that is behind and raise your glass to Louis Camille Maillard!

σ-hole bond as a preliminary stage of SN2 reaction

The role of copper in the Ullmann reaction