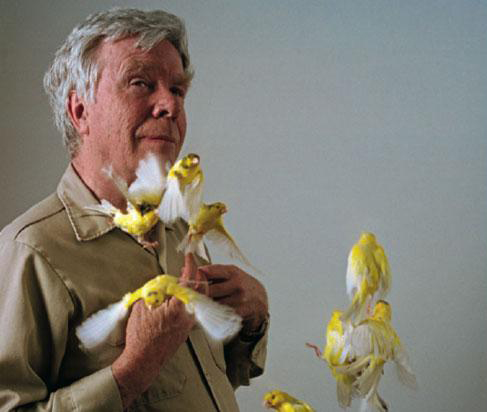 Fernando Nottebohm was born in Buenos Aires in 1940, a second generation Argentine. Animals fascinated him since he was a child and he always wanted to understand how birds sing. After moving to the United States, he began to investigate the bird behavior and he found, using unilateral denervation of the syrinx, song handedness, i.e. dominance of the left hemisphere for the production of learned songs. Second, he found that this dominance could be reversed and thus, when the dominant left syringeal half was denervated in juvenile chaffinches before the onset of singing, the right intact side developed accurate imitations of external models. It indicates that, as in humans, both sides were, at the onset, equipotential and each could on its own do the entire song. Nottebohm also found that this potential for dominance reversal persisted into adulthood in canaries, perhaps because these birds are able to learn a new song every year and their neural substrate is prepared for a constant reorganization necessary for this flexible activity. 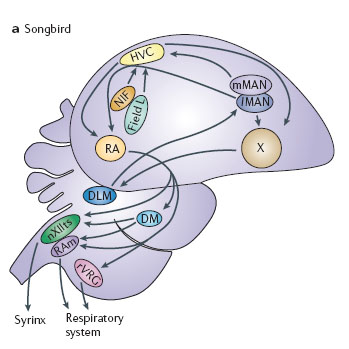 The next task was to identify the brain pathways responsible for the acquisition and production of learned song. In order to locate those brain nuclei and pathways, he did an atlas of the canary brain. With this broad cartography done, he identified the medullary motor neurons that innervated the muscles of syrinx and trachea and studied how these neurons were regulated, in which circuits were they involved. He looked for an equivalent to Broca’s area in humans, a site in the bird brain that when lesioned, modified or suppressed song. The selectively placed lesions around the known forebrain auditory projection of birds led to the identification of such an area, the hyperstriatum ventral, pars caudale (HVc), now known as the nidopallium or, to keep the initials of the old denomination, the high vocal center (HVC). The hodological studies identification of circuitries found that HVC projects to two other discrete anatomical nuclei, the «robust» nucleus of the archeopalium, which in turn projects to the hypoglossal motoneurons that innervate the muscles of the trachea and syrinx, and Area X, that is known now as part of the basal ganglia.

Birds do not have a corpus callosum, then most of the song system’s forebrain circuitry is ipsilateral. Nottebohm produced lesions in both hemispheres and showed that lesions to the left HVC have a much more devastating effect than similar lesions produced in the right one, and the quality of song following such a left lesion was reminiscent of the highly variable subsong of juveniles. Yet, seven months later, this same bird has learned to produce a new normal song, this time under control from the nuclei in the right side of the brain. This was a proof that dominance had flipped from one side to the other and that the vocal system of birds was highly plastical. 1

A new aspect interested Fernando Nottebohm: brain sexual dimorphism. In many bird species, singing is a highly dimorphic behavior, with males showing elaborate and rich songs whereas females have much more simple versions or do not sing at all. Researchers had never before had anything as anatomically discrete as the song system responsible for the acquisition and production of a very well defined behavior; nor had we had before the neural substrate or a learned behavior that was particularly well developed in males and less so or not all in females. His observations that the song brain system of canaries showed substantial differences between males and females was the first example of gross sexual dimorphism in the vertebrate brain. 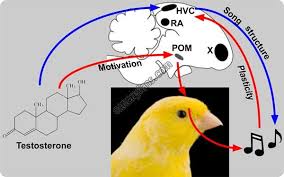 New studies of brain circuitry using lesions and tracers found two overlapping but different forebrain circuits, an «anterior» one, necessary for vocal learning and a «posterior» one, necessary for the production of learned song. Studying the main areas of the song system, Nottebohm found that the HVC was several-fold larger in males than in females and this was true both in canaries, where the males sing much more that females, as well as in the zebra finches, Taeniopygia guttata, where females do not sing at all. Another important discovery was that the dimorphisms could be altered by hormonal treatments with estradiol or testosterone. Changes were observed in the size of the vocal nuclei, the length of dendrites, the number of synapses and the complexity of the song. This hormone-dependent plasticity in the adult brain was also a novel discovery as the dimorphism itself.

A somewhat lateral observation was also astonishing. Birds have reproductive phases related to seasons, modulated also by hormones. Nottebohm compared the size of song nuclei in males in full breeding condition, in the spring with that of others soon after they finished their breeding season, in late summer. HVC was twice as large in the breeding animals. In addition, HVC size was related to the complexity of the repertoire. Canaries with a relatively simple song, defined by the number of different song syllables, might have a large or small HVC, but birds with the more complex songs always have large HVCs.

Finally, Fernando Nottebohm erodes one of the dogmas of Neuroscience: that adult brains do not form new neurons. In a series of remarkably elegant studies on the song areas in the bird brain, he pondered about anatomical seasonality in HVC. He doubted whether this was just growth and retraction of dendrites and synapses, such as a tree producing new leaves in spring and losing them again in fall, or whether the number of «trees» could be also changing. He and one of his coworkers, Steve Goldman, injected birds with tritiated thymidine, a marker for a new synthesis of DNA. They begin checking in adult female canaries treated with testosterone, that they consider their best bet since in these birds HVC volume doubled over a period of few weeks. Using the radioactive label and autoradiography, they could demonstrate, using short survival times (2 days), that new cells were born in the ventricular wall immediately above HVC. Allowing a longer survival (2 weeks), the final target of these proliferation was demonstrated showing that many cells with neuronal aspect (large cells, large and clear nuclei after cresyl violet staining) were already present in the studied HVC. This is, there is neurogenesis, cell migration and incorporation in brain parenchyma in the adult brain.

Nottebohm provided proof of adult neurogenesis and demonstrate that it was required for bird song. To sing their complex melodies, male birds needed new brain cells. In fact, up to 1 percent of the neurons in the bird’s song center were made fresh every day. However, since «birds were birds» many neuroscientists believed that adult neurogenesis was, it at all, limited to few species with particular characteristics such as the dramatic seasonal reorganizations of the canary brain. These studies from Fernando contrasted with the general opinion that considered in his words that «the brain was thought to be a very fixed organ. Once development was over, scientist assumed that the mind was cast in a crystalline structure. That was it; you were done.» 2

Despite the elegance of Nottebohm’s observations, his astounding results were marginalized. Bird brains were seen as too different to the mammalian brain. As happened with previous Joseph Altman’s studies in mammals, evidences from adult neurogenesis were discarded and the new facts excluded from the predominant discourse. Nevertheless, Nottebohm’s careful research and clear-cut results has put into question that one fixed concept in Neuroscience: that the brain does not add new neurons postnatally. The walls of Jericho of the fixed number of neurons in the adult brain had not fallen yet but they were already trembling. New researchers, brave enough to question accepted truth, would finish the work of Nottebohm in the next years.

What birds have inherited from dinosaurs