The European Association of Environmental and Resource Economics has awarded its 2015 Erik Kempe Award to Ralf Martin, Mirabelle Muûls, Laure B. de Preux, and Ulrich J. Wagner for their research “Industry Compensation Under Relocation Risk: A Firm-Level Analysis of the EU Emissions Trading Scheme,” published recently in the American Economic Review. I summarize their work in this article. I congratulate them, and especially Ulrich Wagner, a dear colleague we are fortunate to have at Universidad Carlos III. 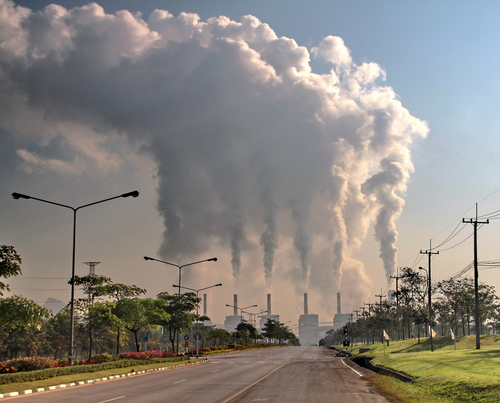 This is how an emissions market work. Say there are three firms, each operating a factory, call them A, B and C, that are responsible for releasing 15,000t, 30,000t and 45,000t of CO2 into the atmosphere respectively. Reducing a tonne of CO2 costs 1€ in factory A, 2€ in B, and 3€ in C. The government wants to reduce emissions from the present 90,000t to just 45,000t. To do this, it gives each firm 15,000 CO2 permits, which they can use to conduct their business or to trade. One permit allows the holder to emit one tonne of CO2. What will firms do? Which will be the price per permit?

The emissions market is cleared at the price 2,5€ (actually, any price between 2€ and 3€ will do the job, but let us use it to simplify). At this price firms A and B prefer to sell their permits rather than holding them to release CO2. If they sell, they have to reduce their emissions at cost 1€ and 2€ per tonne respectively, but this is less than what they get from their permits, so selling is a better option. Firm C has a cost of 3€ to reduce emissions, so it prefers to buy permits at 2,5€ in the market rather than reducing emissions. Firms A and B are willing to sell 30,000 permits, which is the same as what firm C wants to buy. The total cost of reducing emissions to 45,000t is the cost of reducing 15,000t for firm A and 30,000t for firm B, which gives a total of 75,000€. It is worth stressing that the permits are in the hands of the activity where the cost of reducing emissions is higher, and the emissions reduction is made in those places where it is cheaper to do so. This mechanism, often called cap-and-trade, allows the government to implement its policy with the lowest cost for the society.

The emissions trading scheme has four additional features of special interest. First, it works even if the costs to reduce emissions is a private information, meaning that each firm only knows its own costs and the government does not know any of them. Second, the government can easily change its reductions objectives by changing the number of permits, which will be valid for, say, one year. Third, the mechanism works regardless how many permits are given to each firm, as long as the total remains the same. If the firms in the example get, for instance, 35,000t, 0t and 10,000t respectively, the market price would not change, and firm A will sell all its permits to firm C; thus all the permits end up in the hands of the same firms as in the first example. Fourth, if the permits are sold in an auction rather than given away, it would also be firm C the one that would place the highest bid (again, a price just above 2€) to buy all the permits. Needless to say, as permits are valuable, anyone who is given a permit, is also given an asset.

There is, however, a problem with this mechanism. If it is not implemented in all countries at the same time there is a risk that a firm chooses to relocate to a country with no emissions limit. This is called a CO2 leakage. The country with emissions limits is damaged by the relocation of the firm and does not benefit from the emissions reductions, which constitute a global externality that affects all countries in the world. To avoid this leakage, the government can give the firms some compensation. Under the European Union Emissions Trading System, emitters have been favored with free permits based on their past emissions, rather than been required to buy them in an auction. This policy was supposed to change from 2013, where the new phase required the auctioning of permits. In spite of this original plan, the European Commission decided that free permit allocation would be continued for industries deemed at a heightened risk of carbon leakage. Under this policy, the question arises whether this type of compensation is the best way to reduce the leakage risk.

This is the problem addressed in Martin et al. (2015) 1. The authors start by making the economic logic that compensation should be offered first to those firms where it leads to the highest improvement of the government objectives. Then they observe that the actual European Commission policy was to exempt from permit auctions industries that are either very carbon-intensive or very trade-exposed, whereas the efficient policy should have been to exempt those firms where the carbon leakage is higher. The authors also note that there is no empirical evidence that the actual policy is related to actual relocation or downsizing risk. In their article, they provide the first evidence in this topic, based on firm-level data collected by telephone interviews with 761 manufacturing firms in 6 European countries.

In the interviews, the data are collected using the new survey tool developed by Bloom and van Reenen (2007)2 to mitigate biases. For instance, rather than asking the manager for a subjective assessment of the managements’ awareness of climate change issues they gauged this by how formal and far-reaching the discussion of climate change topics was in current management. Among other characteristics of the survey, the interview was conducted double blinded, and in order to check for consistency a subsample of the interviews was double scored by a second team member who listened in.

A first result is that, as postulated, the EU’s approach of exempting entire industries from permit auctions may not be efficient. This is because the downsizing risk for the average firm in most industries and all six countries is well below a 10% cut in production, and also because there is substantial variation between sectors.

Second, the authors run a counterfactual simulation to study the impact of the theoretically efficient policy when total compensations are the same as with the actual policy, and find that it dramatically reduces the relocation risk, even compared to the situation where all permits are given for free.

Third, they consider a dual problem: compute the relocation risk induced by the latest EU policy, and the number of permits given for free. Now compute the number of permits that one needs to give for free under the efficient policy to achieve the same relocation risk. The answer is that only a fraction of the actual free permits would be used, which means that the actual policy overcompensates for the risk of relocation.

Finally, the authors consider the alternative objective function of minimizing job risk, i.e., the risk of losing jobs to the country should a firm be relocated. In this case, the simulation finds that the difference between the optimal and the actual allocation of free permits is particularly severe, as the efficient policy reduces the aggregate risk of job loss by more than half compared to the actual policy, and without increasing the aggregate compensation.

The costs of going green