One of the first things that we are taught in school is that living things are born, grow, reproduce and die. We can think of aging as the line that connects these events, lifespan as the length of that line and senescence as the step that goes from reproducing to dying. The three terms bring along important and unanswered questions in biology: why do we age? How is lifespan controlled? What is the evolutionary explanation for the persistence of life when reproduction is no longer possible? Or put differently, why does menopause exist? 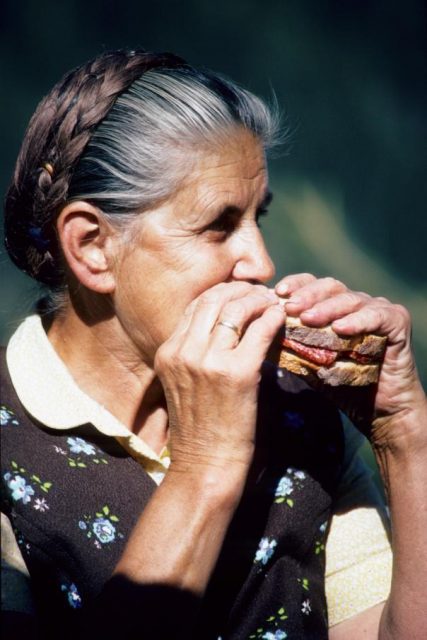 There are different theories to explain why organisms grow old, arisen from the observation of common traits associated with aging at all different levels. If we look across animal species, some patterns seem to arise although with many exceptions. For instances, in animals adult body size correlates positively with lifespan and metabolic rate correlates negatively, meaning that large animals with low metabolic rates usually live longer. However, there are many exceptions to these rules, such as birds and bats that live longer than what expected by their body size and metabolic rates. An interesting case is the naked mole rat, which is a rodent that lives underground. While other rodents such as mice or rats live between one and three years, the naked mole rat can live more than thirty. The reasons for this amazing longevity are not clear, but some hypotheses relate it to low metabolic rate and high protein stability. And then there are animals that just won’t die –unless someone kills them- like the hydra, that keep a pool of undifferentiated stem cells that constantly renew all the cells from the organism. In plants there is also a wide spectrum of situations: while there are species that are annual or biennial, among the perennial species some of them can live extraordinary amounts of time, such as the bristlecone pines: some individuals in California are over 5,000 years old.

At the cellular level there are also many interesting observations associated with aging. The regions at the end of each chromosome, which are called telomeres, become shorter every time the cell divides. Since the higher the telomeres shorten, the faster the organism ages, telomeres are believed to act as molecular clocks. Consistently, when cells are grown in vitro, it is observed that they can only divide a given number of times, a phenomenon called “replicative senescence”. In addition to telomere shortening, cells also accumulate DNA damage throughout their life due to the formation of reactive oxygen species. Oxidative stress acts in the form of a vicious cycle: it reduces the effectivity of antioxidant defenses, further increasing the amount of oxidative species. Eventually, cells cannot cope up with it and die. However, it should be noted that none of these explanations fully explains aging, or at least they only do it to some level.

Scientific research has identified a number of so-called “longevity genes”, that when disrupted extend the lifespan of the organism. Their existence might seem a bit puzzling at first (why have these genes been evolutionary selected if they reduce lifespan?), but it should be noted that genes are selected if they increase fitness (i.e. reproductive success) and not necessarily lifespan. In fact, mutations on many of these genes have been shown to negatively affect reproduction, making organisms that live longer but reproduce less or are sterile.

Interestingly, the proteins encoded by some of these genes are involved in nutrient sensing and insulin response by the organism. So feeding seems to be an important issue when dealing with aging.

There are many dietary interventions that increase lifespan. And this seems to be true for a wide range of organisms, from yeasts and worms to flies and rodents. Advocates of the ’fertility versus longevity’ paradigm argue that extending lifespan is an evolutionary trade-off: when conditions are harsh and food is scarce, fertility is reduced and lifespan extended to wait for better times. An interesting feature of life-extending dietary interventions is that they often come with improved overall health.

There are several ways of messing with food and ending up living more. The first one to be discovered was caloric restriction, which consists on feeding animals around 20-40% fewer calories making sure that the levels of vitamins and micronutrients are maintained. Although there are many studies addressing the benefits of the diet it is still not very clear what molecular mechanisms are activated by it. It has proven beneficial in almost every pathological model that you can think of: Alzheimer’s disease, Parkinson’s disease, stroke, obesity, diabetes, you name it.

What we do know is that part of the explanation comes from the experimental design itself. In the lab things are a bit different than in the wild and rodents normally have free access to food and water, a condition sometimes referred to as ad libitum. This is very practical for people working in animal facilities, since they don’t need to refill the feeders every day but is not so good for the animals themselves, that become obese and have negative health effects in the long run. So many of the ‘beneficial’ effects of calorie restriction would not be causedby the diet itself, but from keeping the animals from becoming obese. On the other hand, if you think about it, these animals make an excellent model of Western societies: they are completely sedentary and eat a lot more than they need.

But calories are only a part of the equation. There are several interventions that increase lifespan and protect against pathological conditions without changing the total amount of calories ingested. One of them is intermittent fasting, in which animals are subjected to cycles in which they have free access to food for 24h followed by 24h of fasting (recently discussed here). Animals on this diet live longer and are leaner than their control counterparts, despite eating as much food as them in the long run due to binge eating on their feeding days. However, not all are good news: long periods of this diet are associated with glucose intolerance and oxidative stress1.

And what about food composition? Does it matter where the calories come from? In a recent and very comprehensive work2 , a group tested 25 different diets that differed in their proportion of carbohydrates, fat and protein content. They used more than 800 mice to obtain robust results. They conclude that is the balance between these nutrients, rather than the total amount of calories, what influences longevity. Surprisingly, they found that the diets that were low in protein content and high in carbohydrates were the most effective in increasing lifespan, and were also associated with lower blood pressure, improved glucose tolerance, lower triglycerides and other good health markers. In fact, reducing the amount of proteins in the diet is sufficient to extend lifespan in many organisms, and in some cases the effect can be achieved by simply restricting certain amino acids (i.e. components of proteins) from the diet. For instances, methionine restriction increases maximum lifespan in flies, yeast and rodents.

Studying the effect of diets in longevity in humans is complicated for several reasons. Worms have a lifespan of about twenty days, flies of thirty days, mice live around two years and rats can live up to three. Monkeys live between twenty-five and thirty years and humans can go up to a hundred. So, it is easy to work with worms and flies, a bit more challenging with mice and rats (considering that doctorate thesis should last around 3-4 years) and much more complicated to study monkeys or humans. In monkeys there are two studies to date, one that indicates that calorie restriction increases longevity and one that claims that has no effect at all on lifespan. A difference in the composition of the diets from both studies has been suggested as a possible explanation for the disparity of results. The authors that found a beneficial effect claim that in the other study their control group was actually being calorie-restricted. On the other hand, the group that didn’t find any increase in lifespan claims the opposite: that the food given to the control group from the other experiment was unhealthy and that increased its death rate.

And what about humans? While lab animals have no choice but to eat what they are given, humans on a diet have the tendency to skip it and then to lie about it, which makes the data somewhat unreliable. What we can do is an inductive analysis: find which populations live longer, the so-called blue zones, and then see what they eat. One of these places is the island of Okinawa, in Japan, which is the place with the highest prevalence of centenaries in the world. The traditional diet is heavily plant-based, although it includes some fish and pork meat. And yes, they eat fewer calories than their fellow Japaneses.

It should be clear by now that the question: “what should I eat to live longer?” is a complex one, so I’ll finish with a simpler one: “what should I eat do die sooner?”. As countries develop, a phenomenon called “dietary transition” takes place, and people change their eating habits, replacing cereal and plant-based food with sugars, fat, and animal-source food. As the transition occurs, the incidence of obesity, diabetes and heart disease increase in parallel. So if you want to die young, just follow the trend.

Between science and fascination: An interview with Dr. Nancy Segal

The problem with exercising and losing weight

Hybridization: no longer the bad guy

Terminator: self-healing does no longer belongs to fiction only