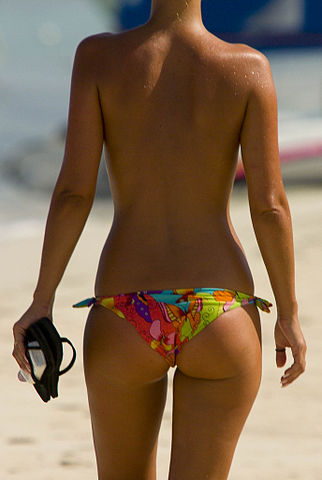 A lot has been said and written about what makes women physically attractive, from having full lips and/or breasts to being shorter than a man, to having a symmetrical face to having a low waist-hip ratio (WHR), all being indicators, at least in theory, of potential reproductive fitness 1. For instance, a low WHR has been shown to correlate strongly with general health and fertility, and, therefore, a strong cue to a woman’s reproductive fitness 2. In a new paper by Guanlin Wang and colleagues, yet another trait is analyzing in relation to female physical attractiveness: body fatness.

Greater body fatness could be advantageous because it could ensure survival in periods of famine, but individuals with larger fat stores have, in general, poor health and lower fertility in non-famine conditions. To analyze the relevance of this trait to attractiveness, the authors asked people from 3 caucasian, 3 Asian and 4 African populations to rate the attractiveness of a series of images of females with varying levels of body fatness (BMI) and WHR and compared it to their statistical model based on the correlation between potential reproductive fitness of different fat degrees to attractiveness. The theoretical model established an optimum of fitness to body fat at a BMI of 22.8-24.8 depending on ethnicity and other assumptions, which if really related to attractiveness should coincide to the most attractive BMI. However, when they looked at the real data they found an inverse correlation between body fat (BMI) and attractiveness that was true for all populations, with lower BMI rated more attractive in all cases.

What they did confirm though, is that in agreement with previous literature on the topic, there is a linear dependence of physical attractiveness to body fat (BMI) and to WHR, and that this dependence is stronger for the first parameter than for the second, even when they show that this variation is culturally dependent. For instance, the variation in attractiveness due to body fatness was greater in Asian and caucasian populations than in African whereas WHR alone produced a significant variation in the African populations but had no effect in the ratings of the Asian ones. Funnily, from my point of view, the authors argue that this difference might be due to the importance that African populations give to buttocks (-I like big butts and I cannot lie-), which reminds me of the Kim Kardashian anomaly, whereas for Asian populations this is quite the opposite.

The main finding of the work is that the optimal BMI for fitness is far higher than that considered the most physically attractive, which lies almost 3 to 4 units below. A reason for this could be that BMI might be used by raters as a proxy for reproductive age, which for a BMI of 20 would approximate 19-22 years of age and therefore, maximal reproductive fitness.

As a conclusion, body fatness is a more telling factor of female physical attractiveness than WHR even when there are cultural differences, and there is no direct correlation between optimal physical fitness based on BMI and female attractiveness. Oh well, and Africans like big butts..

What your eyes can tell

Read it twice: heat transfer from a cooler body to a hotter body

How the physical model of atoms was lost