Contrary to what was thought some years ago, the adult central nervous system is capable of generating new neurons, some of which are integrated into functional circuits and seem to be essential for processes such as memory and learning. 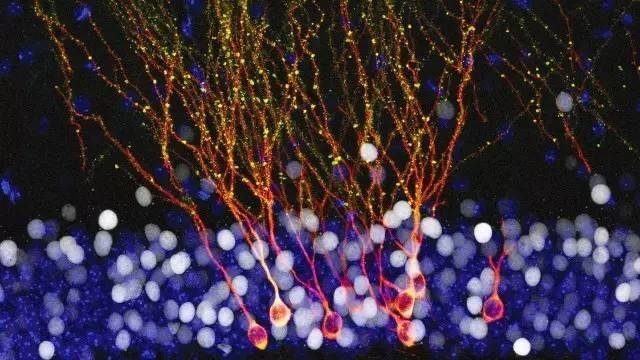 The question of why these new neurons are not capable of replacing those lost in neurodegenerative diseases such as Alzheimer’s or Parkinson’s can be explained: these neurons are only generated in specific areas of the brain, the dentate gyrus of the hippocampus and the migratory current rostral, which goes towards the olfactory bulb. Other possibilities, newly generated neurons in the hypothalamus or others that go to the cerebral cortex, are discussed, would not be present in all species or would be of lesser importance. In addition, the peak of neurogenesis occurs in the first years and its influence in the following decades seems to be lower. Finally, adult neurogenesis does not respond clearly to injury, neurodegeneration or other types of brain damage and the new neurons do not go to the areas where they would be most necessary and effective, but continue to migrate to their final destinations in those same restricted areas.

The hippocampus is one of the regions of the brain most studied and adult hippocampal neurogenesis is also the best known. The new neurons are generated in a constant way in the subgranular zone of the dentate gyrus, they become granule cells, a type of neuron of small size, and are incorporated into the neuronal circuits of the hippocampal formation. In rodents at least these new neurons seem to be crucial for different behaviors including learning, memory, pattern separation or stress response.

Aerobic exercise, particularly running, increases hippocampal adult neurogenesis, also in the subventricular zone from which the rostral migratory current flows and in the hypothalamus, suggesting that the neurogenic effect of exercise seems to affect the whole brain. In addition, aerobic physical exercise is associated with the expression of genes related to neuronal plasticity and improves cognitive performance in both male and female adults. The increase in the number of neurons is due at least in part to the fact that there is more survival of new neurons and not because the cell cycle becomes shorter. However, although these new neurons diminish with age, exercise is able to avoid the depletion of hippocampal neurogenesis linked to age. In mice that have a mutation in which the Btg1 antiproliferative gene is missing, running influences the cell cycle kinetics of the progenitor neurons and leads to a shortening of the cell cycle which reactivates neuronal proliferation1.

We are already understanding how the exercise causes this increase: it is through specific mediators, in particular the brain derived neurotrophic factor (BDNF) and the insulin-like growth factor 1 (IGF-1). Preliminary results from my research group show that IGF-1 facilitates neuronal survival in a neurodegeneration model.

The study of the exercise effects upon adult neurogenesis has analyzed different models: in rodents the most used is to see the effects of running. The effect of anaerobic exercise, including resistance training, has also been studied, which is simulated in rats using a progressive training regimen, using a vertical ladder and weights fixed to the base of the tail. This exercise increases IGF-1 but not BDNF in the hippocampus. The combined effect of aerobic and anaerobic exercise, such as high-intensity interval training, which is increasingly popular, has also been tested. In rats it is simulated using a threadmill that makes rodents run at 85-90% of their maximum speed with short recovery periods and repeating this cycle to achieve sessions of one hour.

When comparing human and rodent data, it is perhaps necessary to comment that a reward and / or punishment system is used in animals. To encourage the rats to run on a wheel or on a treadmill, gentle electric shocks are used. It is logical that this procedure causes stress in animals which can interfere with the results, since a prolonged and unpredictable stress inhibits neurogenesis, while a mild stress promotes it.

Another aspect that influences the results is the individual variability. Although aerobic exercise is beneficial for everyone’s health, the effects are very variable in different persons, a difference that is believed to be due to the genetic variability. The aerobic training produces in some people a remarkable improvement in the maximum aerobic capacity and in the metabolic health while the same training regimen in other people presents zero benefits or even negative results. It is estimated that 20% of the people tested are “non-responders” that show no changes after the exercise regime or even that the changes are negative. A solution in research has been to select groups of rats for their high or low response to aerobic training. After fifteen generations and the selection of individuals has been achieved a strain of rodents that respond strongly and another strain that respond weakly to physical activity. After a program of physical exercise the first ones went from running a distance of 646 to 849 meters while the low response rats, with the same training design, dropped from 620 to 555 meters. The rats of the high-response group (HRT) develop a clear improvement in different markers of cardiorespiratory health such as stroke capacity, volume of oxygenation (V˙O2max) and the function of myocardial cells. On the contrary, those same markers do not change or decrease in the low response group. There are many different things at the molecular level between both groups, including variations in the transcriptome, changes in the biogenesis of mitochondria, differences in angiogenesis in skeletal muscle, variations in signal molecules such as JNK and kinases and a long etcetera. Everything seems to indicate that the difference is based on different responses to exercise, which focus on the transfer of energy and may explain some problems in metabolic diseases and health.

The paper by Nokia and collaborators 2 shows that the training of anaerobic resistance does not cause changes in hippocampal neurogenesis in adults, although it does improve their physical health. The effects of exercise depend on sustained aerobic activity and high-intensity training bouts did not show the same effect. There were also genetic differences and the animals selected for their high response to aerobic exercise and who liked to run voluntarily on the wheels of the cages were those that showed the greatest increase in adult hippocampal neurogenesis. The conclusion is that hippocampal neurogenesis in adults is maximal in animals that have a genetic tendency to a greater response to exercise and that perform a greater voluntary aerobic activity. 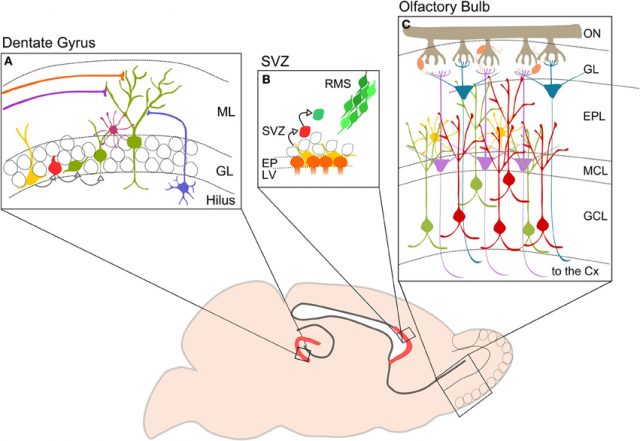 Since changes in neurogenesis after aerobic exercise are observed in different neurogenic areas there seems to be a common mediator and the most obvious may be an increase in blood flow. Many of the proliferating cells of the dentate gyrus are close to blood capillaries and aerobic exercise increases blood flow precisely to the dentate gyrus, both in humans and in rodents. The increase in blood flow would increase the metabolic and trophic contribution to the neurogenic niche. In fact, the distance run during physical activity correlates with BDNF expression while anaerobic exercise does not increase BDNF production. BDNF expression rises after an increase in neuronal activity. On the other hand, for the new neurons to survive, it is necessary for the brain to face challenges related to learning, each new task makes a cohort of newly created neurons survive, something that does not happen in a passive environment. On the other hand, the learning effect on the survival of these hippocampal neurons also depends on the amount of training, more effort in a task, implies greater involvement of the hippocampus in that learning process and more hippocampal neurons of new generation survive in response to learning. This is important because the hippocampus is one of the brain regions that shows earlier changes in Alzheimer’s disease.