Imagine you want to study the biology of an animal that no one has been able to capture. First, you devise a way of trapping it, then a method of calming it down so that you can manipulate it. This is exactly what David Wineland did, but his long-sought prey was not an animal, but an ion. His methods for manipulating the states of that ion won him a Nobel prize in 2012. 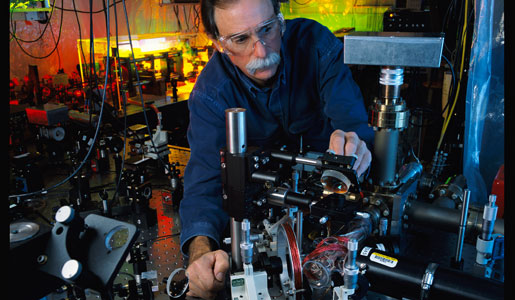 David Wineland received his bachelor’s degree from the University of California, Berkeley in 1965 and his PhD in 1970, supervised by Norman Foster Ramsey, Jr., who would win a Nobel prize in 1989 for the development of the hydrogen maser, at Harvard University. Wineland’s doctoral dissertation was about a kind of maser, the deuterium one. A maser is a device for amplifying or generating microwaves by means of stimulated emission. A laser is basically the same thing but it is monochromatic light, from the infrared to the ultraviolet, what is amplified.

Wineland then performed postdoctoral research in Hans Dehmelt’s group at the University of Washington where he investigated electrons in ion traps. Dehmelt would receive the Nobel prize in 1989 together with Wolgang Paul (and Ramsey) for the development of the ion trap techniques.

In 1975, Wineland joined the National Bureau of Standards (now called NIST), where he started the ion storage group, and the physics faculty of the University of Colorado at Boulder. There, Wineland would combine ion traps and lasers into “experimental methods that enable measuring and manipulation of individual quantum systems” that would earn him his own Nobel prize shared with Serge Haroche.

The Penning trap has a similar geometry and operation, but there is also a positive direct voltage on the cap electrodes with respect to the ring electrode, and an axial magnetic field to confine the particles. This is the trap that Dehmelt developed and named after Frans Penning.

Wineland was the first person to use a laser to cool down an ion in 1978. A laser can be used to suppress the ion’s thermal motion in the trap, putting the ion in its lowest energy state and thus enabling the study of quantum phenomena with the trapped ion.

Another achivement of Wineland’s laboratory was the mastery of laser pulses. A carefully tuned laser pulse can be used to put the trapped ion in a superposition state, which is a simultaneous existence of two distinctly different states. For example, the ion can be prepared to occupy two different energy levels simultaneously. In this way a quantum superposition of the ion’s energy states can be studied.

Wineland’s team devised creative experiments and managed to show in great detail how the act of measuring actually causes the quantum state to collapse and loose its superposition character. Instead of dealing with Schrödinger’s cat, Wineland traps quantum particles and put them in cat-like superposition states. These quantum objects are not really macroscopic as a cat, but they are still quite large by quantum standards.

Wineland’s group was the first in the world to demonstrate a quantum operation with two quantum bits. Since control operations have already been achieved with a few qubits, there is in principle no reason to believe that it should not be possible to achieve such operations with many more qubits. However, to build such a quantum computer is an enormous practical challenge.

David Wineland and his team of researchers have also used ions in a trap to build a clock that is a hundred times more precise than the caesium-based atomic clocks which are currently the standard for our measurement of time. Time is kept by setting, or synchronizing all clocks against one standard. Caesium clocks operate in the microwave range whereas Wineland’s ion clocks use visible light – hence their name: optical clocks. An optical clock can consist of just one ion or two ions in a trap. With two ions, one is used as the clock and the other is used to read the clock without destroying its state, or causing it to miss a tick. The precision of an optical clock is better than one part in 1017, which means that if one had started to measure time at the beginning of the universe in the Big Bang about 14 billion years ago, the optical clock would only have been off by about five seconds today.

With an optical clock it is possible to measure a difference in the passage of time when the clocks speed is changed by less than 10 metres per second, or when gravity is altered as a consequence of a difference in height of only 30 centimetres.