For the first time, scientists have entangled atoms for use as networked quantum sensors, specifically, atomic clocks and accelerometers. The research team’s experimental setup yielded 1 ultraprecise measurements of time and acceleration. Compared to a similar setup that does not draw on quantum entanglement, their time measurements were 3.5 times more precise, and acceleration measurements exhibited 1.2 times greater precision.

Entanglement, a special property of nature at the quantum level, is a correlation between two or more objects. When two atoms are entangled, one can measure the properties of both atoms by observing only one. This is true no matter how much distance — even if it’s light-years — separates the entangled atoms.

A helpful everyday analogy would be the following. A red marble and a blue marble are placed in a box. If you draw a red marble from the box, you know, without having to look at the other one, that it’s blue. We may say the colour of the marbles is correlated, or entangled.

In the quantum realm, entanglement is subtler. An atom can take on multiple states (colours) at once. If our marbles were like atoms, each marble would be both red and blue at the same time. Neither is fully red or blue while it sits the box. The quantum marble “decides” its colour only at the moment of revelation. And once you draw one marble of “decided” colour, you know the colour of its entangled partner.

Greater sensitivity in atomic clocks and accelerometers would lead to more precise timekeeping and navigation systems, such as those used in global positioning systems, in defense systems and in broadcast communications. Ultraprecise clocks are also used in finance and trading. 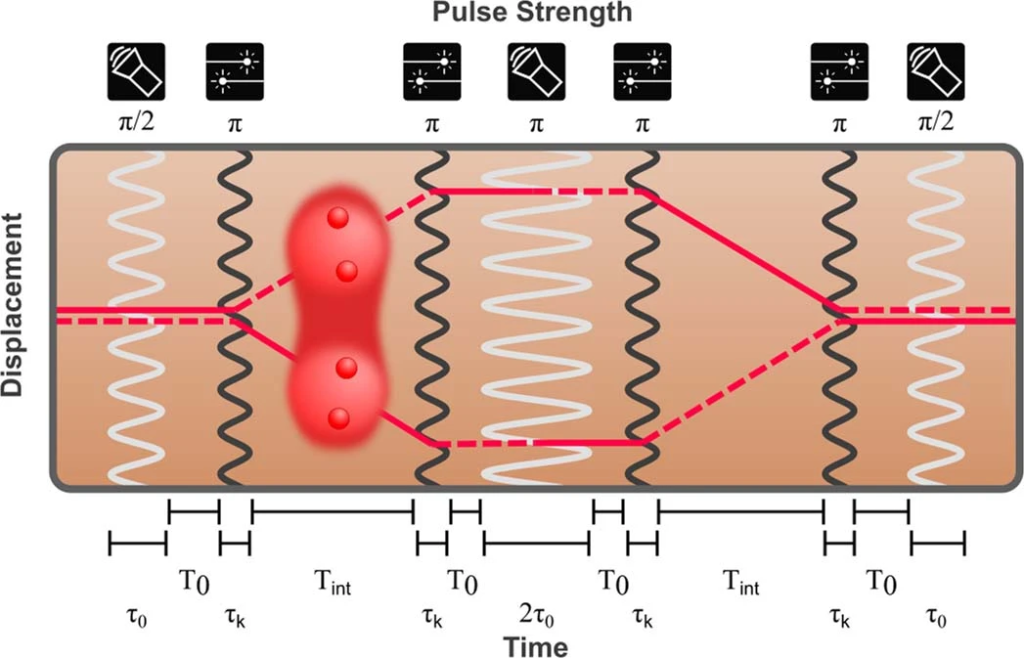 One can mark the passage of time by counting the number of pulses in an electromagnetic wave, just as you would count the ticks of a clock. If you know that a particular wave pulses 6 billion times per second, you know that, once you count 6 billion crests of the wave, one second has passed. So knowing the exact frequency of a microwave gives one a precise way to track time.

Rubidium atoms, trapped inside a cavity, are separated into two groups of about 100,000 atoms each. The groups sit between two mirrors. Light is made to bounce back and forth between the mirrors, tracing its way through the groups of atoms with every shot. The ricocheting light entangles them.

A microwave ripples through the two groups of atoms. The atoms that happen to resonate with the microwave’s particular frequency respond by changing to a different state. Similarly, when a particular acceleration is applied to the atomic groups, some fraction of the atoms in each group responds by changing state.

The two entangled atomic groups behave like two faces of a single clock, or two readings of one accelerometer. The research team measured the number of atoms that changed state —the ones that resonated —in each group. Then they used the numbers to calculate the difference in the microwave frequencies applied to the two groups, and therefore the difference in the groups’ readings of time or acceleration.

The team found that entanglement improves the precision in the frequency or acceleration difference read by the displays. In their setup, the measurement of time in two locations was 3.5 times more precise when the clocks were entangled than if they were operating independently. For acceleration, the measurement was 1.2 times more precise with entanglement.

“If you want to know how long something takes, you might look at one clock as a starting point and then run to another room to look at another clock, the end point,” Mark Kasevich, lead author of the paper, said. “Our method exploits the entanglement principle to make that comparison as precise as possible.”

The researchers also successfully networked four groups of atoms in four separate locations using this configuration. In the team’s experiment, the two groups of atoms were separated by about 20 micrometers, close to the average width of a human hair. Their work means that time or acceleration can be compared, with unprecedented sensitivity, between four separate, albeit close-together, locations.

“In the future, we want to push them out to longer distances. The world wants clocks whose time can be compared. It’s the same with accelerometers. There are sensing configurations where you want to be able to read out the difference in the acceleration of one group with respect to another. We were able to show how to do that,” Kasevich said.

We are another step closer to wielding quantum phenomena to improve our everyday lives.

The protective effect of symmetry in entangled photonic states