Marcos Otero García has just earned a Ph.D. in neuroscience at the University of Valencia

We got it wrong.

Media have outlined a rosy picture of Oxytocin as the “love hormone” that floods our brain when we interact with toddlers, puppies and beloved ones. However, scientific evidence portrays a dark side of Oxytocin, which better matches the ambivalences of human nature. In addition, Oxytocin has a long time ignored sibling, called Vasopressin, who does half of the work and gets little credit.

It is important to understand well these neurohormones because they are key modulators of our social behaviour, emotions and motivations. They are like the directors of a big orchestra, composed of three sections: the socio-sexual, emotional and reward brain networks. 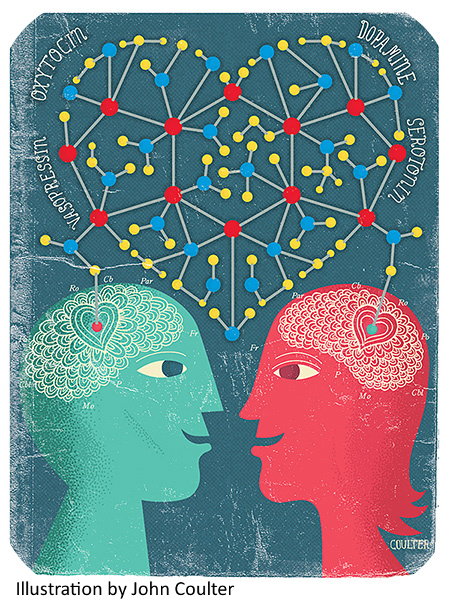 Malfunction of Oxytocin and Vasopressin systems can result in profoundly altered sociality and emotional outcomes. Furthermore, these alterations can be inherited through epigenetic mechanisms, affecting many generations. Well-known is the case of abused children, who tend to repeat the same mistreatment on their own progeny. Aberrant caregiving experienced by these unfortunate kids may shape their Oxytocin and Vasopressin systems during early life, affecting their future social and emotional behaviours1 which will then impact on their own progeny, perpetuating the tragedy.

What are Oxytocin and Vasopressin?

Let’s start from the beginning. What are exactly Oxytocin and Vasopressin? Both are nonapeptides, that is to say, peptides composed of nine aminoacids. Their sequence is so similar it only differs in two amino-acids. Both come from the duplication of a single ancestral gene, before vertebrate divergence. In fact, Oxytocin and Vasopressin genes are still very close to each other (12kb) in the chromosome 20.

Both nonapeptides are produced in the brain, specifically in neurons of the hypothalamus, and released through the pituitary onto the blood stream as neurohormones. Oxytocin promotes uterine contraction (hence its name from greek “quick birth”) and milk ejection while Vasopressin increases blood pressure (that was an easy guess). Interestingly, Oxytocin and Vasopressin also function as neurotransmitters within the brain. The same neurosecretory neurons projecting to the pituitary send axons to distant target areas within the brain.We have recently mapped the areas covered by nonapeptidergic axons in the brain of mice and found that they correspond to the brain regions responsible for socio-sexual behaviour, emotions and motivation2.

Despite their close relationship, Oxytocin and Vasopressin seemed to play quite different and complementary roles, sometimes described as love vs hate, or affiliation vs confrontation. Humans love to simplify and classify things, and building up dichotomies is one of our favorite ways to do so. On the whole, Oxytocin has been reported tofacilitate social affiliation and bonding, from mother-infant attachment and romantic love3 to our affinity with dogs4. On the other hand, vasopressin seems to modulate aggression, social memory and stress responsivity5. However, we should avoid misleading oversimplifications.

Oxytocin promotes affiliation but also favoritism and negative emotions such as envy and gloating. It is not a “cuddle hormone” but more a “social emotions enhancer”. It is released when we cuddle, but also when we fight, improving our social information processing.On the other hand, Vasopressin neurotransmission is very important for social memory and aggressive behaviour, largely overlapping with Oxytocin in many behaviour modulatory roles.

Regarding stress and anxiety, Oxytocin isoften associated to anxiolytic effects and Vasopressin is found to be anxiogenic. However, they act more in coordination than in opposition. In other words, both neurohormones play in the same team, closer thanit can seem.

Oxytocin and Vasopressin are two components of the same system

Despite all, Oxytocin and Vasopressin are commonly studied and discussed by oneself. In early works, researchers thought that nonapeptidergic neurons in the hypothalamus where synthesizing (and releasing) either Oxytocin or Vasopressin exclusively. As it happens with the apparent functional segregation of the two nonapeptides, things turn out to be untrue.

In the hypothalamus, big neurosecretory cells synthesize and release both nonapeptides at the same time. The key is they do it in quite different proportions: going from a 1:500 relation of one peptide versus the other, to an even 1:1 proportion in few cells. Accordingly, our recent work shows that Oxytocin and Vasopressin are in fact together in many neuronal somata and axons of nuclei that are important for maternal behaviour. We found a population of neurons expressing both nonapeptides along a large area of the hypothalamus. In addition, we found axons containing both Oxytocin and Vasopressin in brain regions that control fear responses and attachment, two key components of maternal behaviour.

But they do not only share presynaptic neurons; Oxytocin and Vasopressin share their postsynaptic receptors. Said in another way, the receptors to which nonapeptides can bind are highly promiscuous. Vasopressin can activate Oxytocin receptor with almost the same affinity as Oxytocin itself! On the other hand, Oxytocin can activate also the Vasopressin receptor, though with a 100-fold less affinity6.

It is not surprising, after seeing the high degree of coincidence in the distribution of both nonapeptides in the brain, and the interchangeability of their receptors, that Oxytocin and Vasopressin functions also overlap in great measure.

Remember that within the nervous system there is no such thing as one role-one molecule; dopamine is not the pleasure molecule and Oxytocin is not the love hormone because the reality is far more complex. The games your brain plays involve numerous neurotransmitters drawn into elaborate interactions.
Next time you think about Oxytocin, please, don’t forget its sibling Vasopressin. Moreover, think about them as players in much thesame position within the team, accompanied by other neurotransmitters playing in each spot of the field. Without any of them, there would be no match.

The chemistry of love revealed

Voles and the chemistry of love

The mystery of collagen and thyroid hormone: a detective story