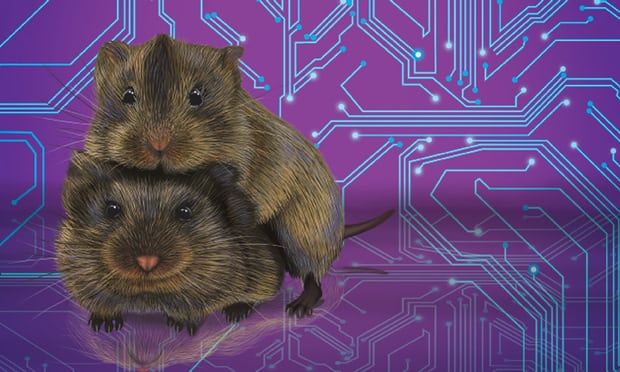 The question of how human interaction works is a neurochemical one, but it’s not easy to solve. While many experiments cannot be performed on humans or primates, smaller laboratory animals are useless for this research due to their differences with us. But prairie voles (Microtus ochrogaster) have social traits that had previously been assumed as uniquely human, which not only makes them fascinating, but also useful as a model for us to learn more about ourselves.

Unlike more than 95 percent of mammals, prairie voles are monogamous and form bonds in the long term and sometimes even for life. This was first noticed in the 1970s when the biologist Lowell Getz1 was performing a routine study on the animal population of a rural area of Illinois. He was surprised to see that voles would come to the shed where he and his group worked and stored their records, attracted by the smell of the whisky they kept there. But the voles’s love for booze was not the only discovery they made: it was even more surprising to note that they would always show up in pairs, often male and female. Upon being tracked, eleven out of twelve pairs turned out to be “stable couples” that shared dens and spent most of their time together, whereas only the twelfth pair lived apart from each other and each one of them hung out with several other voles.

Once they mate, voles have bonded. They choose to spend more time with a particular individual and to pay more attention to it for periods beyond the breeding season, and they generally display a high level of supportive behaviour towards their partner. The males, rather than abandoning their offspring like other species often do, stick around and contribute to the care of the pups. The females clearly expect this behaviour, and demand from the male that he does his part by pulling him by the neck if he is lazy. When a partner dies, they experience grief and very often stay single.2 However, this monogamy is social rather than sexual: voles can mate with several partners, but they have a unique bond with one of them. Thus, males can have the occasional affair outside their nest, to which they will still return, while females that have lost their mates rarely form another couple, although they may still reproduce.3

We already knew that monogamy involves deep changes in the way the partner is perceived, and that this must involve changes in the brain’s reward system;4 these changes had already been observed by MRI scans in humans although the exact mechanism remained unclear. But recently, a study published in Nature by researchers at Emory University in Atlanta,5 shows that voles with stronger connections between two particular areas of the brain are more likely to be monogamous.

The so-called corticostriatal connections are the areas of the brain where the cortex (the outer part of the brain, involved in executive control) projects into the striatum (the centre of the brain’s reward system), and they play a central role in developing appropriate goal-directed behaviours. This includes the motivation and cognition to develop appropriate actions in order to obtain a specific outcome or reward.6 Using electrical probes, the authors of this study recorded peaks in activity in the corticostriatal circuit, and they found that the first time two voles mated, the activity changed: the stronger the activity got, the quicker the animals would start forming a bond, or, like we would say in human terms, “becoming a couple”.

Interestingly, when the scientists altered these connections to artificially make them stronger, they found that they could influence the preference of a female vole to bond with a certain male. In these experiments, the females were placed next to males they could see but with whom they couldn’t have any physical contact due to them being placed in glass cages. After having their corticostriatal circuits stimulated in presence of those males and when given a choice of males the following day, the females would still show preference for the vole they had seen the day before.

Since it has already been demonstrated that neurochemicals like oxytocin (which plays a role in the mechanisms for maternal and social bonding) and dopamine (related to reward processes) modulate these brain areas in both males and females,7 8 this research suggests that differences in the densities of neurochemical receptors could underlie the mechanisms leading to monogamy and other social interactions. In the future, these findings might be relevant for further research on disorders such as autism in which social interaction is impaired.

The chemistry of love revealed

The love hormone and its disregarded sibling