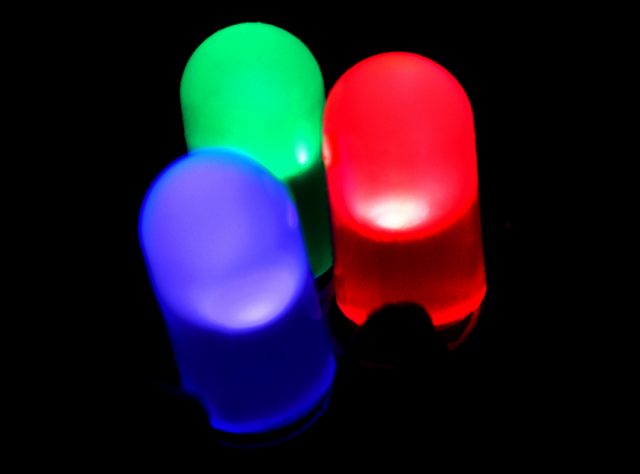 We saw that one of the devices based on semiconductors are photocells. A photocell working in reverse is also useful. If a conduction electron in an n-p diode happens to fall into a hole, it will emit the excess energy as a photon, much as an electron would do in an atom as it jumps to a lower quantum state. If the diode is designed to emit light in the visible range for display purposes, it is called a light-emitting diode, or LED for short.

These LED lights, which are usually red, green, or blue, can be found on most electronic devices, usually to indicate that the device is on or that the circuit is functioning. They can be also used in large-scale devices, such as computer monitors, where they consume less energy and exhibit less distortion than do traditional CRT monitors.

One of the biggest uses of n-p diodes is in circuits where we want the current to flow in one direction only, but not in the opposite direction. This is used, for instance, in logic circuits for computers, in which an answer of “true” or “false,” or “yes” or “no,” or 0 or 1 can be decided by whether or not the current is allowed to flow through the device. A device that allows a current to flow in one direction only can also be used to convert an alternating current (AC), for instance the current from a wall socket, into direct current (DC) for use in small electronics devices.

Commercial electric current in the United States and some other countries, for example, alternates in a wave-like pattern at a rate or frequency of 60 cycles per second (60 Hz). This is shown in Figure 2 (left). If we hook up a closed circuit that includes the AC wall socket, a device for measuring the current (an ammeter), and an n-p semiconductor, the current in the wire will go in only one direction, which occurs only when the voltage is positive on the p-type side and negative on the n-type side (Figure 2, centre). This conversion of AC to DC current is called rectification, and devices that rectify are naturally called rectifiers. These are useful for devices that accept only DC current.

You can see from Figure 2 (right) that the voltage produced by the n-p junction diode is positive only, but it is constantly changing over each hump and hits zero for a long interval. These effects can be reduced by sending the current through additional electronic devices, known as filters, that help to smooth out the voltage to a constant value, producing a steady direct current that can then be fed into a DC electronic device—an electronic game, a calculator, a laptop computer, etc. These properties of semiconductors become even more interesting when we add a third semiconductor to our junction diode. This forms a transistor.