Until the 80’s all Olympic Games took place in rich countries, with the only exception of Mexico 68. In the 80’s, Moscow 80, Seul 88 and Sarajevo 84 started a trend that encouraged bids from developing countries with the result that after 2000 over half of all bids have come from this group. This fact and the increasing economic size of the event opened the discussion on whether hosting the Games makes economic sense. Baade and Matheson (2016) 1 review all the existing literature on the issue and come to some conclusions.

The International Olympic Committee, IOC, requires a minimum of 40,000 hotel rooms and an Olympic Village capable of housing 15,000 athletes and officials. In addition, the city has to have prime quality sports facilities and transportation systems. Once the event is over the city may be left with a severe overcapacity. Management, the organization of opening and closing ceremonies, and security complete the list of expenditures. 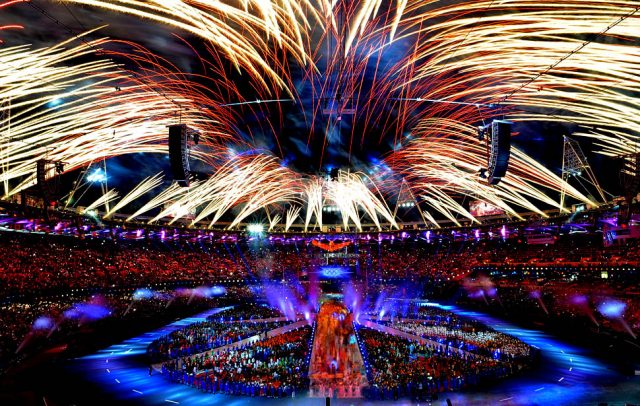 Total spending in recent times ranges from the 3.6 billion dollars (in 2015 prices) in Atlanta 96 to the estimated 45 billion in Beijing 08 for the Summer Games. Direct revenues, on the other hand, are only a fraction of the total costs (a figure between one quarter and one fifth is typical), and the city has to subtract the 70 percent that the television rights –almost half the revenues- that IOC keeps for itself. Any economic sense to become a host must come from indirect benefits. These include the short-run benefits of tourist spending during the Games; the long-run benefits or the “Olympic legacy” which might include improvements in infrastructure and increased trade, foreign investment, or tourism after the Games; and intangible benefits such as the “feel-good effect”. This last effect has been documented for London 12, where surveys showed a substantial willingness to pay (3.4 billion dollars), but still very far from the 11.4 cost estimate.

To study the short-run benefits one needs to detect, for instance, the monthly employment overall as well as in a variety of specific industries around the date of the Games and in suitable control cities or regions to control for regional trends. The findings of different studies for different Games find no impact on job creation or sales or an impact much lower than the official estimates previous to the Games. There are even reports on negative effects, like the case of reduced consumption in the Sydney 00 Games. An effect of one tenth of the official estimate is not far from the typical Olympics. There are several reasons not to trust the official estimates besides the obvious one that the officials who commission the reports have a vested interest. First, they typically ignore substitution effects (one dollar spent in one ticket bought by a local is most likely one dollar not spent in the city by the same person), as well as crowding out effects (tourists and business persons that avoid the congested city during the Games). This last effect was considerable in Salt Lake City 02, that caused a 9.9 percent drop in hotel occupancy, in London 08 where some popular shows in the theater district actually shut down, and in Beijing 08, with a 30 percent drop in international visitor and a 39 percent drop in hotel occupancy. Second, they use dubious economic methods, relying on inappropriate multipliers or economic simulations. All in all, Los Angeles 84 was the only case to show profits, and this can be attributed to the fact that the city was the only bidder for that year, resulting in a strong bargaining position to get television rights, utilize existing infrastructure, like the 60-year old Los Angeles Coliseum, and use corporate sponsors.

Let us consider, then, the long-run benefits. First, the Games might leave a legacy of sporting facilities that can be used by future generations, but academic studies are nearly unanimous in finding little or no economic benefits associated with stadiums and arenas (Coates and Humphreys 2008) 2. Second, the investments in general infrastructure can provide long-run returns and improve the livability of host cities. This worked for the athletes’ villages in both Atlanta and Los Angeles, that were converted into new dormitories for local universities, and for Salt Lake City 02, who expanded its highways to popular ski resorts to the East.

Third, The Olympics can serve to “put a city on the map” as a tourist destination. In 1990, Barcelona was the 13th most popular tourist destination in Europe with fewer than half the number of bed nights as its neighboring rival, Madrid. Following the 1992 Summer Olympics, the city experienced the fastest growth in tourism among large European cities, so that by 2010 the city was the fifth most popular destination on the continent and had eclipsed Madrid in bed nights (Zimbalist 2015) 3. Similarly, ski resorts in Utah experienced a 20.4 percent increase in skier visits between the year before the Salt Lake City Games in 2000–01 and 2014–15, outpacing Colorado’s 8.0 percent growth over the same period. However, the results in Salt Lake City and Barcelona have not been replicated in other host cities. The explanation for their success may be that both of these locations can be seen as “hidden gems,” locations that are highly attractive to tourists but that had been previously passed over for their better-known neighbors in Colorado and Madrid. Calgary, Canada, and Lillehammer, Norway, the hosts of the Winter Games in 1988 and 1994 respectively, did not have much to offer after the Games. Conversely, London, already the most popular tourist destination in the world at the time of the Games, could hardly win more recognition because of the Games.

A final economic justification for hosting the Olympics is that the Games can serve as a positive signal to businesses and consumers about the future state of the economy. Some preliminary findings reported a 20 percent increase in exports for countries that hosted the Olympics. Further analysis, however, showed the reversed causality as the same result was found for all bidding nations, regardless of whether they got the Games or not (Maennig and Richter (2012) 4 and Langer et al. (2015) 5. An alternative explanation is more likely: bidding nations are almost exclusively drawn from a set of countries with sound economies and bright prospects for the future—a clear case of selection bias.

Why, then, do countries bid to host the Games? The authors offer three possible explanations: