Idoia Ros holds an MA in Linguistics by the University of the Basque Country (UPV/EHU) and is currently a Ph.D. candidate at the Dept. of Linguistics and Basque Studies of this same institution. She’s affiliated with the Gogo Elebiduna – Bilingual Mind Lab, directed by Prof. Itziar Laka. She investigates the impact of general cognitive biases on word order preferences in typologically diverse languages. 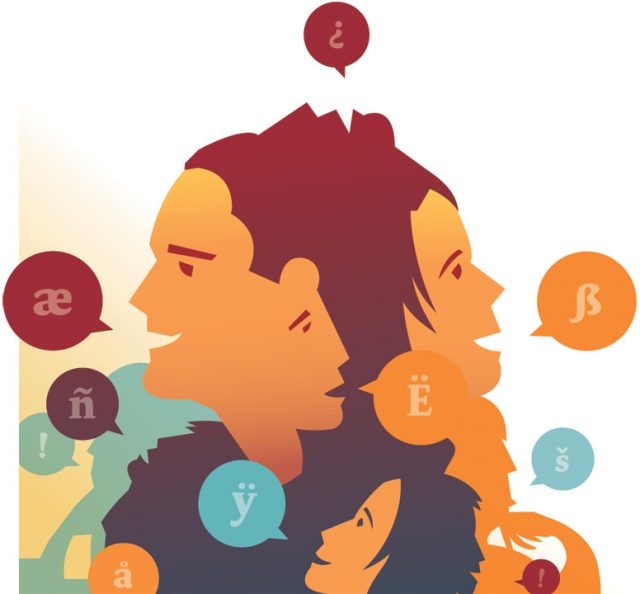 For a great part of the past century bilingualism was believed to affect intelligence negatively1. Jespersen, in 1922, claimed that “the brain effort required to master the two languages instead of one certainly diminishes the child’s power of learning other things.” Still, some people (wrongly) believe that children might get confused by exposure to more than one language, which could lead to delays in their development and to less than perfect linguistic competence. In a lot of places around the world bilingual speakers of a minority or indigenous language are consistently discriminated against. However, recent research on bilingualism has had the socially desirable effect of raising awareness on these issues, and has even started turning the tide: every other day mass-media confronts us with the idea that bilinguals are smarter, have more efficient brains, have superior social skills, are visually more attentive, and that speaking a second language delays the onset of dementia by up to five years.

However, press coverage might be obscuring the ongoing scientific debate on this topic, for the sake of a good story and at the expense of science itself. So, how much truth do these headlines hold? Here I will argue that only a portion of it. I will focus on the seminal discovery that bilingual kids outperform their monolingual peers at tasks such as the Simon task, where participants respond to certain shapes by pressing a button (click here to run a demo of the Simon task). For example, the left button is pressed when a triangle appears on the screen and the right button when a circle does. Triangles and circles appear on the left or right side of the screen respectively, leading to incongruent (e. g. triangle appearing on the right side) and congruent (e. g. triangle appearing on the left side) trials. Incongruent trials commonly elicit slower responses than congruent trials, a difference known as the Simon effect. Ellen Bialystok, at the University of Toronto, found that, when responding to incongruent trials, Tamil-English bilingual children were more accurate and faster than their English monolingual counterparts, and labeled this difference a bilingual advantage. Other labs have lately replicated this type of finding with similar tasks in children and young and older adults2.

Why are bilinguals more accurate and faster than monolinguals? The original proposal goes like this: bilinguals need to go back and forth between simultaneously active languages, and they are thus extensively trained in inhibiting one language while speaking the other, as Itziar Laka explained in Mapping Ignorance some time ago. This would transfer to other aspects of cognition, improving what psychologists call executive function, an overarching system that we use for controlling inhibition and attention to stay focused on the task at hand, and to maintain distractions at bay. Shortly after Bialystok’s seminal discovery, a number of researchers started finding that bilinguals also seem to outperform monolinguals in tasks that do not require inhibition. For example, in one study participants had to sort cards according to either their color or their shape depending on a previous cue: bilinguals were faster than monolinguals in switching the sorting criterion (2). Life-long experience in juggling between languages could thus also lead to an enhanced capacity to monitor and switch between non-verbal tasks.

Nevertheless, as the number of studies reporting null results grows3, several researchers are beginning to doubt the existence of bilingual benefits, and reporters have started echoing them. De Bruin and collaborators have denounced a publication bias4. They looked at conference abstracts from 1999 to 2012 and argue that studies challenging the hypothesis of a bilingual advantage were published less than those reporting a positive or mixed result. 68% were published if the data demonstrated a bilingual advantage, but only 29% when they showed no bilingual advantage or a bilingual disadvantage. However, publication biases do not speak to the quality of the unpublished studies nor dismiss results from published ones. More compelling arguments challenging the existence of bilingual advantages come from experiments yielding null effects when controlling for differences across populations and/or with a large number of participants. First, in countries traditionally receiving migrants such as Canada or the USA, bilinguals often differ from monolinguals in terms of immigration status, degree of education, socioeconomic level, etc. In this case, it is virtually impossible to disentangle the effect of these variables from the effect of bilingualism per se. Second, a meta-analysis that combined data from a total of 165 studies, indicates that bilingualism is not reliably associated with faster or more accurate responses in cognitive tasks measuring inhibition or monitoring. The figure below, extracted from the study where this meta-analysis was conducted (3), illustrates positive (green bars) and null results (blue bars) as number of participants (0-300 in the y-bar) grows. Bilingual benefits are not found in studies with population samples greater than 50 participants. However, rather than counting studies reporting effects in one direction or the other, and dismissing positive results as the outcome of confounding factors or of inadequate sample sizes, we need to understand what is triggering differences across studies. 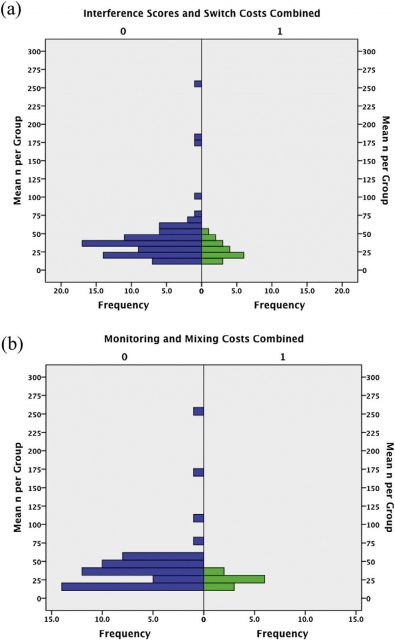 Two studies carried out by Eneko Antón and Andoni Duñabeitita are especially relevant to try to understand the pattern of results depicted in the graphs above56. These two researchers from the Basque Center on Cognition, Brain and Language (BCBL) tested hundreds of monolingual and Spanish-Basque bilingual children (8–13 years of age), conscientiously matched in socioeconomic and cognitive measures. That is, they solved one of the major confounds in previous studies, where bilinguals were also migrants: if any differences across populations (monolinguals versus bilinguals) was to be found, it could be exclusively attributed to bilingualism. Paap, in his influential review on the issue of bilingual advantages, claims that “these children were better candidates to show bilingual advantages” since they “acquired both languages early, were highly proficient, and were immersed in a bilingual region” (3). But they failed to find any. At first sight, this seems like a strong case against the existence of any bilingual advantage. However, if one considers more carefully the type of bilingual participants selected in these studies, the evidence is not as compelling as one could think it was. 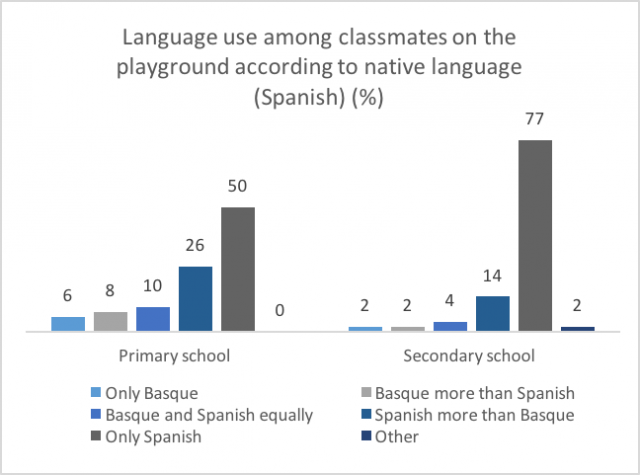 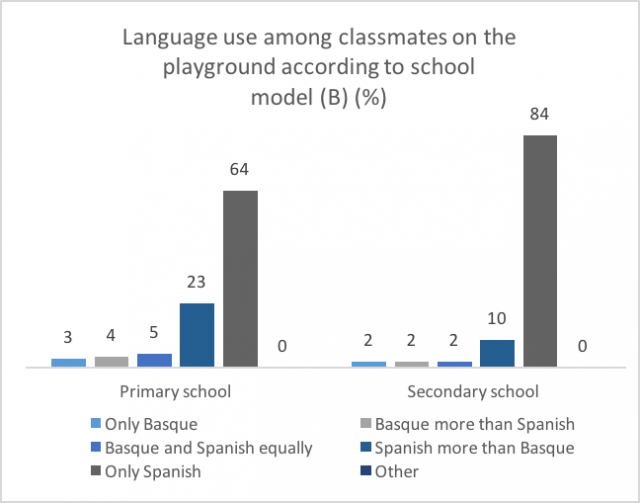 The bilingual children in these two studies had Spanish as their native language, as their parents did, and attended schools where Basque was spoken only 50% of the time. In the Basque Country, the use of Basque among children and teenagers is heavily dependent on the type of school kids attend and on their native language, as reported in The Arrue Project 2011, from which the two graphs above are taken. 35,844 kids studying fourth grade in primary school (9–10 year-olds) and second grade in secondary school (13–14 year-olds) took part in this research program on the language used by pupils, created by Soziolinguistika Klusterra and the Department of Education of the Basque Government. The bilingual kids in Antón’s and Duñabeitia’s experiments might not be the type of bilinguals Paap describes. Most likely, they are kids from a mostly Spanish monolingual environment exposed to Basque (at best) half of their school-time (and not necessarily actively using it). There is a myriad ways of being a bilingual: bilinguals can be classified in terms of age of second language acquisition (early vs. late bilinguals), proficiency (low-, mid-, and high-proficiency bilinguals), frequency of L2 use (active vs. latent bilinguals), and patterns of use in their social environment (both languages used actively vs. only one of their languages used). Linguistic competence and actual use of (and switching between) the two languages should be carefully controlled for if we aim to settle down the debate around bilingual advantages.

At the end of the day, most headlines in the media convey extreme positions that do not carry much resemblance to our state of knowledge, and we need to read them with a pinch of salt. Moreover, science popularization should attempt to represent the process of scientific thought itself rather than any ultimate truth, especially in areas where research is still new and speculative. Thanks to valuable studies as the one conducted at the BCBL, we know that the initial claim for overarching bilingual benefits needs to be toned down and that it is likely that some of the null effects in previous studies were due to the fact that not all types of bilingualism confer an enhanced domain-general executive control. If we intend to gain a better insight on how and when bilingualism affects general cognition, we face the challenging and daunting task of implementing experiments with more stringent control of relevant variables, such as a careful consideration of the linguistic characteristics of the populations tested. And, more relevantly, we need a clear and precise theory that guides that task: how does language control work and how do we transfer our ability in that domain to the more general one of cognitive control? That is, in what type of bilinguals should we expect any effect? Some labs have already started taking steps in that direction7.

A lot of researchers initially endorsed the idea that bilingualism generates general cognitive improvements. At best, most of them would now adhere to a less extreme version of this claim. After a long history of discrimination against speakers of minority languages and dialects, I cannot but sympathize with this position. It is only human to want objective evidence for what is moral and fair and to condemn as dumb what is unjust. But this is not the goal of scientific research, and I would thus suggest that we stop considering cognitive or linguistic phenomena from an impoverished perspective, where metaphors of loss and gains surreptitiously creep into the scientific discussion, driven by our feelings and personal beliefs. This only leads to artificially heated debates and extreme positions we could spare ourselves of if we were just to put desires and prejudices aside. We should focus on whether and how bilingualism can shape the mind, and refrain from any moral judgment about it.

A pinch of salt for CRISPR research

‘Male’ vs ‘female’ brains: having a mix of both is common and offers big advantages

Salt and your IQ