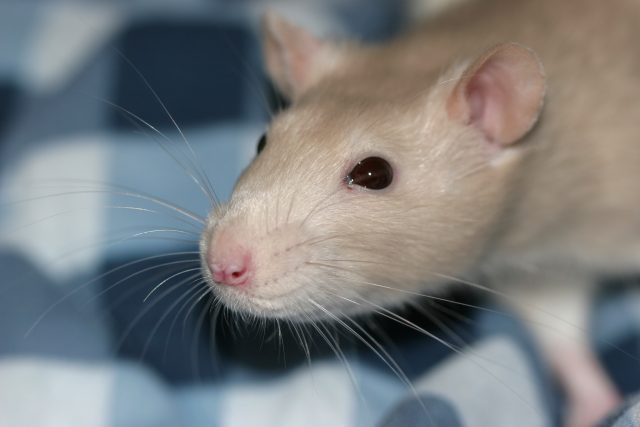 Whiskers or vibrissae are a type of mammalian hair characterized, anatomically, by their larger, thicker and stiffer morphology, large and well-innervated hair follicle and by having a definite projection in the somatosensory cortex of the brain, forming the so-called “barrels”. The ‘barrels’ of the barrel field are regions within cortical layer IV that are visibly darker when stained to reveal the presence of cytochrome c oxidase, and are separated from each other by lighter areas called septa. A rat has around 300 whiskers.

Whiskers typically grow in groups in different locations, usually conserved throughout evolution. In the head, many land animals have supraorbital (above the eyes), genal (of the cheeks), and mystacial (where a moustache would be), as well as mandibular (of the jaw) vibrissae under the snout. 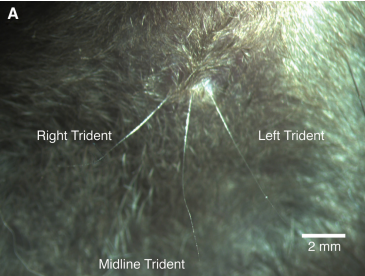 There is also an under-investigated submandibular «whisker trident» on the chin. It consists of three whiskers: an unpaired midline whisker and a pair of mirror-symmetric slightly shorter whiskers flanking it. All three whiskers point to the ground and are curved backwards. The trident whiskers have many peculiarities 1:

Cortical postsynaptic air-puff responses in the trident representation confirm the right hemispheric bias in the representation of the midline trident and show much less temporal precision than facial whisker responses. Trident and facial whiskers do not only differ in their morphology, behavioral use, and biomechanics but also show remarkable differences in the response dynamics. Trident whiskers do not provide as much high-resolution information about object contacts as facial whiskers. Instead, these observations suggest an idiothetic function: trident whiskers obtain continuous measurements about egomotion from ground contacts.

Egomotion information is the information regarding the motion of the subject in space and such information is of particular value to nocturnal animals, which navigate in the dark, and thus need to estimate their location in space. The midline position offers unique advantages in sensing heading direction in a laterally symmetric manner. Thé’s research team suggested that changes in trident deflection angle with velocity suggest that trident whiskers could be read out as a tactile speedometer.

A recent study by the same group has studied the cortical representation of trident whiskers and E-row whiskers in barrel cortex 2. E-row whiskers are the lowermost row of macrovibrissae and they are also often in contact with the ground during locomotion and thus suitable for monitoring locomotion behavior. The putative trident barrel columns areas project to the vestibular nuclei, as well as to the posterior parietal cortex, an area thought to be involved in pathway integration. These projections to the spinal vestibular nucleus are unique to trident cortex and do not extend to the nearby facial or paw somatosensory cortices. 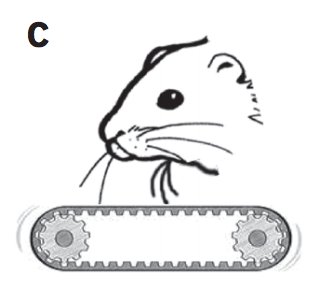 The authors wanted to analyzed if cells from anesthetized animals respond to ground displacement in the cortical trident barrel columns. To check this, they run a little treadmill under rat’s chin to look at movement representation in trident whisker defection. Second, they wanted to analyze whether egomotion-related responses were seen in awake, freely behaving, foraging rats. They assessed whether the firing of units in the trident, E-row barrels and the dysgranular zone (DGZ) were modulated by speed, acceleration and turns. The DGZ is a part of the somatosensory cortex between the forelimb and macrovibrissae representations and is not linked to cutaneous sensations and thought to be involved in proprioception.