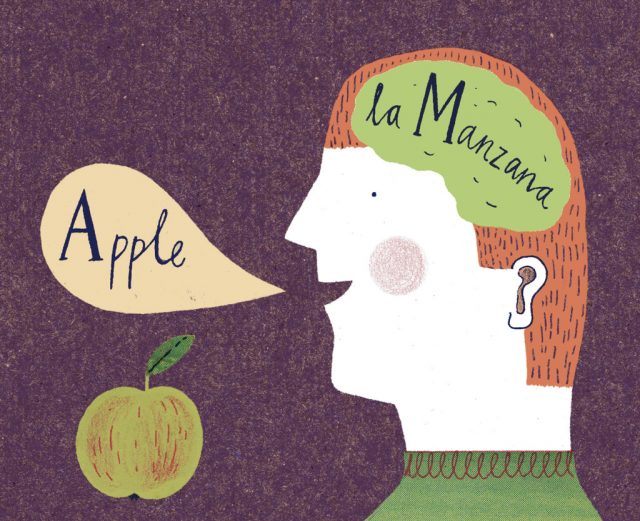 Theory of mind is the ability to attribute mental states—beliefs, intents, desires, knowledge, etc.— to oneself and others and to understand that others have beliefs, desires, intentions, and perspectives that may be different to ourselves. Attributing thoughts to others allows one to predict or explain their actions, and to posit their intentions. It enables one to understand that mental states can be the cause of —and thus be used to explain and predict— the behavior of others. This notion has been widely used in the study of autism spectrum disorders —persons with autism would have troubles with the theory of mind— but it has also been analyzed in patients with schizophrenia, attention deficit hyperactive disorder and chronic alcoholism, as well as in normotypical persons.

Executive functions are a set of cognitive processes (e.g. inhibitory control, working memory, cognitive flexibility and attentional control) that are involved in the cognitive control of behavior. Executive functions gradually develop and change across the lifespan of an individual and can be positively or adversely affected by the variety of events that affect a person throughout his/her life, particularly during the childhood. 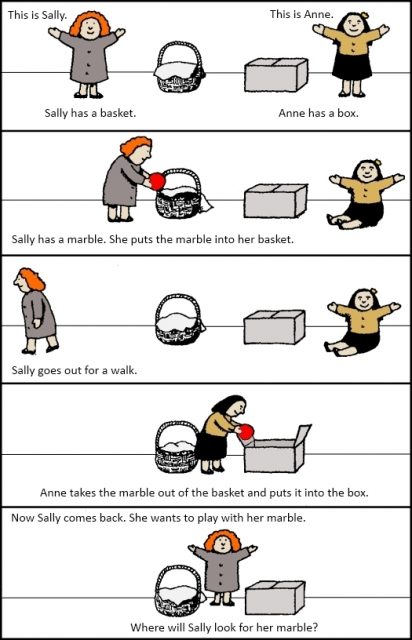 The Sally–Anne task is a psychological test based on the theory of mind, used in developmental psychology to measure a person’s ability to attribute false beliefs to others. It was developed by Simon Baron-Cohen, Alan M. Leslie, and Uta Frith, then at the MRC cognitive development unit in London and published in 1985 in the journal Cognition 1. In the experiment, children were presented with two dolls, Sally, who has a basket, and Anne, who has a box. Sally puts a marble in her basket, and leaves the room. While Sally is away, Anne takes the marble from the basket, and puts it in her box. Finally, Sally returns to the room, and the child is asked three questions 2:

The crucial point is the belief question. Children have to predict the behavior of a mistaken character, which requires attributing the character a false belief. Different studies have shown that four-year-olds tend to get the idea that Sally will look in the basket, whereas three-year-olds instead point to the box and fail therefore this false-belief task. It allows to deep into different concepts of children development and to establish useful landmarks. So the younger children seem to show a difficulty in understanding that other people might have different levels of knowledge to them, and will therefore behave differently to them in the same situation.

Bilinguism is the use of two languages and it is believed that bilingual or multilingual speakers outnumber monolingual speakers in the world’s population. Bilingual speakers have acquired and maintained at least one language during childhood, the so-called first language. The first language (sometimes also referred to as the mother tongue) is acquired without formal education, by mechanisms heavily disputed. Children acquiring two languages in this way are called simultaneous bilinguals but even in this case, one language usually dominates the other. People who know more than one language have been reported to have better skills at language learning compared to monolinguals, and have important economic advantages in their professional career over monolingual individuals. In addition, a growing body of research demonstrates that bilinguals show advantages in executive functions, specifically better inhibitory control and task switching. A possible explanation for this is that speaking two languages requires controlling one’s attention and choosing the correct language to speak. Curiously, people who speak one oral language and one sign language do not demonstrate this bilingual advantage in executive functioning tasks. This may because one is not required to actively inhibit one language in order to speak the other. Bilingual individual also seem to have a better performance in an area known as conflict processing, which occurs when there are multiple representations of one particular response (for example, a word in one language and its translation in the individual’s other language). It has also reported that bilinguals have reduced-risk for dementia, but this claim has come under strong criticism with repeated failures to replicate the original study.

Recent studies have revealed that 3-year-old bilingual children and adults outperform their monolingual peers in standard false belief tasks. It is both surprising and suggestive. These studies discuss a number of experiential factors that could explain this difference, such as bilinguals having greater metalinguistic awareness (e.g. understanding at an earlier age that a concept can have different labels) or an enhanced sensibility to differences in perspective (e.g. appreciating that not all speakers share the same language). Bilingual children may have better skills to follow the protagonist’s perspective when task manipulations interfere with the false belief reasoning. For example, when the protagonists disappear from the scene, it disrupts the process of perspective tracking in monolingual children 3.

Thus, the better performance of bilinguals in false-belief tasks may have two alternative explanations: either it is a consequence of their better inhibitory control; that is, bilinguals are allegedly better than monolinguals at inhibiting the erroneous response to the false-belief question or, as a second option, bilinguals’ better performance results from more effective attention control. While both hypotheses about bilingual children’s advantage in false belief tasks have been discussed in the literature (i.e. that they may have an earlier understanding of belief vs. a better executive function), the dominant view is that their better inhibitory control allows them to pass these tasks earlier. Paula Rubio-Fernández has written an interesting review (3) where she solidly discusses available information and considers that perspective tracking is a continuous process that requires focusing on an agent throughout a series of events and therefore depends on attentional resources, a good argument.

Finally, we live in sad and worrying times. Some politicians try to sell blatant lies as «alternative facts» and fundamental concepts like truth and reality, and even facts! are put into question. Maybe this is what is hidden under the idea of a post-truth world but we need to polish our executive functions and detect liars and false beliefs promoters. Based on science, it would not be a bad idea to improve our multilinguism and multiculturality.

Your mind will never be uploaded to a computer