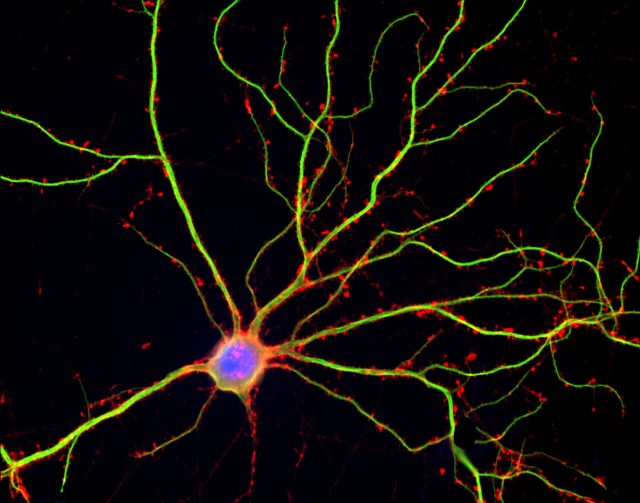 Sleep is a naturally recurring state of mind and body characterized by altered consciousness, relatively repressed sensory inputs, inhibition of nearly all voluntary muscles, and reduced interactions with surroundings. We spend around one third of our lives sleeping although why we sleep is still theme of debate. Sleep seems to assist animals with improvements in the body and mind, including healing of wounds and refining immune functions. Another idea suggests that sleep helps to conserve energy, though this theory is not fully adequate as metabolism only decreases by about 5–10% during sleep in comparison with wake hours. Recent research has demonstrated that an essential function of sleep is to remove waste products from the brain intercellular spaces and do neuron maintenance.

An important function of sleep is to consolidate newly formed memories. During waking hours, we learn all kinds of information, both consciously and unconsciously. During sleep, neurons in the brain modify large numbers of synaptic connections, making some of them stronger and larger, whereas other synapses are weakened or destroyed 1. Working memory is affected by sleep deprivation whereas procedural memory benefits from late REM-rich sleep and whereas declarative memory befits from early, slow wave-rich sleep.

Giulio Tononi, at the Center for Sleep and Consciousness of the University of Wisconsin-Madison has proposed a far-reaching explanation about the function of sleep, the synaptic homeostasis hypothesis. According to this idea, sleep serves to renormalize synaptic strength, counterbalancing a net increase of synaptic strength due to learning-associated plasticity during wakefulness. Dr. Tononi and his long-term collaborator Dr. Chiara Cirelli have shown (using molecular and electrophysiological markers in both invertebrates, rodents, and humans) that synaptic strength does in fact increase during wake and decrease during sleep in much of the brain. Moreover, using a combination of genetic, molecular, and electrophysiological approaches, they have found that sleep need is increased by the amount of plastic changes during wake and that sleep can be induced on a local basis by learning and plasticity.

Tonino and Cirelli’s group have recently published in Science that large scale «downscaling » of synapses takes place when the brain is in sleep state to counterbalance the increases that occur during waking learning-intensive hours 2. Energetic and information considerations suggest that potentiation should occur primarily during wake, when animals learn, and depression should occur during sleep, when they consolidate those learned ideas, concepts and procedures and restore levels to basal conditions. Synapse modification and its scientific analysis are herculean tasks. A mice brain contains 14 millions neurons and each one of them harbors thousand of synapses. Of the billions of cortically synapses of adult mice, around 80% are excitatory, and most of them are on dendritic spines. A dendritic spine is a small membranous protrusion from a neuron’s dendrite that typically receives input from a single axon at the synapse. Dendritic spines serve as a storage site for synaptic strength and help transmit electrical signals to the neuron’s cell body. Most spines have a bulbous head (the spine head), and a thin neck that connects the head of the spine to the shaft of the dendrite. 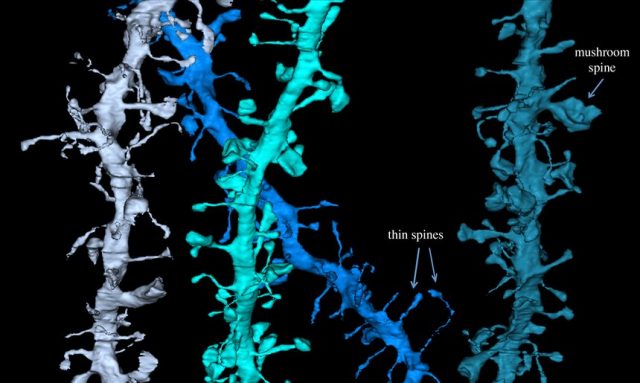 The dendrites of a single neuron can contain hundreds to thousands of spines. Spine size is tightly correlated with synaptic strength. Morphological characteristics of the synapse such as the area of the postsynaptic density, the area of the axon-spine interface, and the volume of the spine head are strongly correlate among themselves with the number of vesicles in the presynaptic terminal, the number of synaptic AMPA receptors and the amplitude of AMPA receptor mediated synaptic currents. Their prediction was that billions of cortical excitatory synapses should increase in size after wake and decrease after sleep, and doing it independent of circadian rhythms. Furthermore, although synaptic renormalization should affect a majority of synapses, it should be selective, to allow for both stability and plasticity and storage of individual specific memories.

The authors measured 6920 synapses in mouse motor and auditory cortices using three-dimensional electron microscopy. Within each dendrite segment, all spines were annotated. Synapses were defined by the presence of a presynaptic bouton with at least two synaptic vesicles within a 50-nm distance from the cellular membrane facing the spine, a visible synaptic cleft and a postsynaptic density, the basic structure of a synapse. The authors focused on the axon-spine interface, the surface of direct contact between axonal bout and spine, as a structure measure of synaptic strength because its exact borders are easier to identify than those of the postsynaptic density. This axon-spine interfaces decreased around 18% after sleep compared with wake. This decrease was proportional to axon-spine interface, which is indicative of scaling. Scaling was selective, sparing synapses that were large and lacked recycling endosomes. Similar scaling occurred for spine head volume, suggesting a distinction between weaker, more plastic synapses (~80%) and stronger, more stable synapses. These larger spines were presumably involved in learning.

The ultrastructural demonstration of up- and down scaling of synapses sizes with wake and sleep support the hypothesis that wake leads to a net increase in synaptic strength, whereas a core function of sleep is to renormalize synaptic strength through a net decrease returning to basal levels. Synaptic scaling across the wake/sleep cycle is likely to be a general phenomenon, irrespective of species, brain region and specific plasticity mechanisms. This study helps to explain why sleep is beneficial for mental function, and why «sleeping on it» can help us think more clearly and to find the best way of action. Nevertheless it is unclear if synapses are scaled down. Also, there are data available on telomere length attrition in subjects with impaired sleep, being thus a possible link to age-related memory problems.

Best sleeping position for your brain