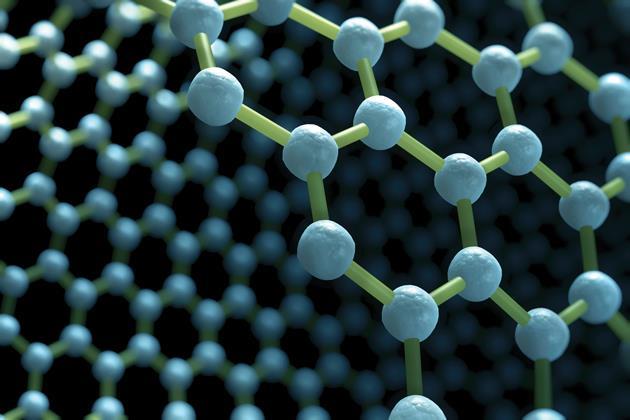 Since the discovery that graphene, the two dimensional carbon allotrope, can be isolated and incorporated into electronic devices intense research efforts have been triggered. Driving forces behind the experimental and theoretical studies of graphene are, e.g., the exceptional electronic properties, in particular the high electron mobilities, the long spin coherence lengths and the possibility to access exciting physical effects such as the integer quantum Hall effect or Klein tunneling.

These effects arise due to the relativistic behaviour of electrons near the Dirac point, where the band structure of graphene is characterized by a linear dispersion. While the Dirac point is a direct consequence of the topology of the honeycomb lattice of graphene, it may be severely altered or completely destroyed when graphene is interfaced with another material.

A graphene–metal interface can be classified as either a strongly or weakly interacting one. The two scenarios can be rationalized in terms of hybridizationbetween the Dirac cones and metal bands. In the case of strong interaction, the linear dispersion is either removed or strongly altered due to a substantial hybridization between localized d-states and graphene’s π-bands. Such effect is observed, for example, in graphene on Ni, Co, and Fe. By contrast, in the case of the weak interaction, the Dirac point is only shifted with respect to the Fermi level of the metal leading to an effective n-type or p-type doping of graphene, as observed, for example in graphene on Au, Cu or Ag.

As a rule of thumb, in the weakly interacting (physisorbed) regime graphene is hardly corrugated and resides at a large distance from the metal (∼3 Å) while in the strongly interacting (chemisorbed) case this distance is reduced by around 1 Å. In either case, subtleties in the electronic structure strongly depend on the actual graphene’s adsorption geometry, like the formation of a moiré pattern versus a well oriented (1×1) structure or the precise stacking of the C atoms relative to the topmost layer atoms, which dictates the rupture of the sublattice symmetry and possible gap openings.

Consequently, it can be conjectured that an appropriate mixture of strongly and weakly interacting metals will allow a precise control of the graphene–substrate hybridization. This becomes most interesting for graphene/ferromagnetic interfaces due to their technological possibilities. Therefore, it would be desirable to design a robust route to decouple graphene from the ferromagnetic surface in a continuous way, thus, enabling to fine tune the magnetic properties induced in the graphene layer as well as the doping level and magnitude of the hybridization gap.

The use of surface alloys for graphene–substrate adhesion and improved graphene growth has been explored. Actually, the graphne layer itself was shown to have profound influence on the kinetics and activation barriers of alloy formation. Thus, graphene may potentially open a route toward stabilizing new interface alloy compositions such as highly Ir diluted γ Fe.

Now, a team of researchers from CFM, ICMA, ICCM and DIPC has explored 1 the structural, chemical and electronic properties of a graphene layer during Fe and Ir intermixing at the graphene/Ir–Fe/Ir(111) interface obtained after intercalating one Fe monolayer between the graphene and the Ir.

They find that Ir atoms begin to alloy with the Fe layer already at relatively moderate annealing temperatures of about 650 K and, notably, the amount of alloyed material can be precisely tuned by gradually raising the temperature up to 1000 K. At a critical Ir concentration of around 0.25 a transition in the graphene layer from chemisorption to physisorption takes place, which is accompanied by severe changes in the structural, electronic and magnetic properties of the graphene. Although the transition is abrupt, it is still possible to tune the graphene’s doping level in the physisorbed phase by further increasing the Ir content.

These results would be very useful in the design of future spintronics devices based on graphene.