The analysis of armed conflicts between countries has a tradition in Game Theory, starting with the classical models for the battle of the Bismark Sea by Haywood (1954) 1 and for the nuclear conflict in the Cold War by Schelling (1960) 2. More recent analyses focus on the uncertainty of the specific destruction capacity of one of the parts. In this context, Jelnov et al. (2017) 3 show how the strategic decision to engage in a preventive attack against a hostile country can be made with high probability even if intelligence reports the lack of threat. Of course, the explanation says nothing about the ethics of the whole situation. Next we provide a simplified version of the model in Jelnov et al. (2017). 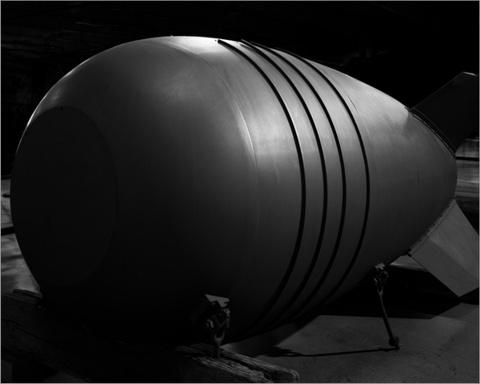 There are four possible strategy combinations: (Bomb, Attack), (Bomb, No Attack), (No bomb, Attack) and (No bomb, No attack). The natural preferences of the countries are such that, if Country 1 builds the bomb, Country 2 prefers to Attack; and if Country 1 does not build the bomb, Country 2 prefers not to attack. On the other hand, if Country 2 attacks, Country 1 prefers not to build the bomb (after the attack, Country 1 will be vindicated against Country 2), but if Country 2 does not attack, Country 1 prefers to build the bomb. Recall that these are preferences about the hypothetical outcomes, and that nothing is said about the actual decisions of the countries, as they do not know what the other country is deciding. We can illustrate these preferences in the following sequence, where each action indicates what would be the ideal reply to the other’s action in case it were known:

This game is not very different from a penalty kick in which the striker has to decide to aim for the left or the right side, and the goalie has also to decide to dive to the right or to the left. Because the ball goes too fast, the goalie has to make the decision before she actually sees where the ball is going. Striker and goalie have different opinions about the outcomes, which can be illustrated in a similar sequence:

The best strategy for both the striker and the goalie is to be unpredictable and randomize their choice, but not necessarily with a fifty-fifty chance. The right probabilities depend on the abilities of the striker and the goalie on each side. For instance, the outcome (Left, Right) may be worse for the striker than the outcome (Right, Left) because when hitting left the probability of not scoring due to a bad kick may be higher than when aiming for the right side. The calculation of the correct randomization for each player is not difficult, and those randomizations will lead to a result in terms of a probability of scoring.

For the same reasons, countries 1 and 2 must also be unpredictable. In this case, the result will be an expected utility of the different outcomes calculated using the probabilities of the strategies for each country.

Consider now that if Country 1 decides not to build the bomb, it can also decide to allow Country 2 to inspect and verify its peaceful intentions. This strategy does not make sense if the country decides to build the bomb, as it would be attacked immediately. However, the government of Country 1 may lose its political influence if it welcomes foreign inspectors. If this cost is not too high, its payoff can still be better than the situation explained before, with a positive probability of being attacked. If the cost of allowing the inspections is too high, it may be better off risking the attack.

Country 2 does not know the type of Country 1

In this next complication, consider that Country 2 does not know for sure the type of Country 1. However, it does know that if Country 1 is of the weak type (for whom the cost of inspection is low) it will allow the inspection. Thus, if Country 1 does not allow inspection it can safely be assumed to be of the strong type (with high inspection costs). Therefore, the equilibrium is the same as before.

By introducing the IS, Country 2’s strategies can be conditioned on the message, giving four possibilities for the case when Country 1 does not allow inspections:

If the IS is very accurate (p close to one), Country 2 will choose (A, NA), i.e.: Attack if the message is “Bomb”, and Do not attack if the message is “No bomb”. While p is very accurate, the utilities vary linearly with the value of this probability as long as countries do not change the strategy choices in equilibrium. This causes an interesting thing in the intermediate cases, for which the equilibrium requires a randomization between (A, A) and (A, NA) or a randomization between (A, NA) and (NA, NA). As p changes from a value very close to one to a lower value, Country 2 may change its strategy from (A, NA) to a randomization between (A, A) and (A, NA), and this implies an drastic increase in the probability of choosing A.

The result is that even in the case Country 1 does not build the bomb and the IS says so, Country 2 still attacks with a high probability.

Where is the mass inside a black hole?

A common formation mechanism for star clusters over all mass scales