Paola Falanga is pursuing an M.Sc. degree in Psychology at the University of Napoli. Paola did an internship at Trinity College Dublin (Trinity College Institute of Neuroscience and School of Psychology) under the auspices of the Erasmus+ program.

Adrià Rofes holds a PhD in Cognitive Neuroscience and an MSc in Clinical Linguistics. He worked at the University of Trento (Italy), the University of Groningen (The Netherlands), and Macquarie University (Australia). He is now at Trinity College Dublin (Ireland) as part of the Global Brain Health Institute. 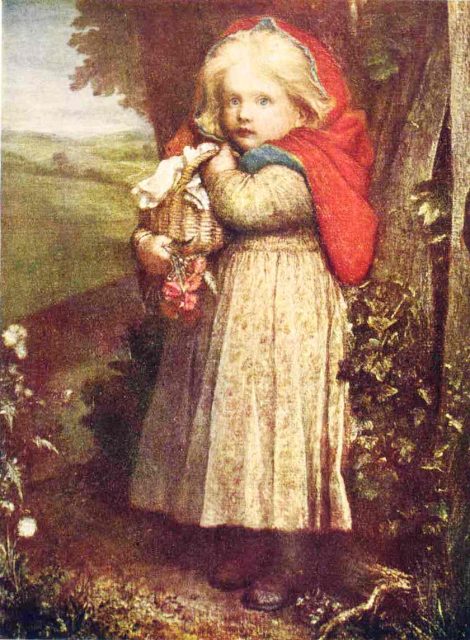 Do you remember the “Little Red Riding Hood” story – the beloved fairy tale that your parents used to read to you before bed? Besides putting you and many other children across the globe to sleep, this story is a great “spontaneous speech” resource to assess language impairments in people with neurological disorders. An interesting way to use a fairy tale? Let us see how this is done.

What is spontaneous speech?

We use “spontaneous speech” when we tell a friend about our holidays or when we discuss the last book we read. With the word “spontaneous” we indicate something that occurs by its own motivation rather than by external forces, and with the word “speech” we describe the ability to express thoughts and emotions using language1. “Spontaneous speech”, then, refers to the use of oral language in everyday settings – something that many of us do every day, all the time. Spontaneous speech has been used by clinicians and researchers for long now, as the types of questions that patients are asked to answer are relatively easy to respond to, and the task itself is very rapid to administer. In clinical and research settings, spontaneous speech can be elicited in different structured ways, including the use of fairy tales like the Little Red Riding Hood 1:

How does spontaneous speech differ from formal testing?

Spontaneous speech is a useful way to study aspects of everyday language use that are of difficult access with regular language assessments. Regular assessments are composed of “formal tasks” such as object naming (saying the name of an object when seeing a picture, for example, “apple” when seeing a picture of an apple) or sentence comprehension (reading a short sentence, such as “The cat is chased by the dog”, and pointing to an image correctly describing the sentence). Just as an example, in a sentence comprehension task like the one above, people with language impairments are required to concentrate on a specific sentence and on the words forming the sentence. Now, what kinds of spontaneous speech measures do we need to look at to assess language impairments?

Prins and Bastiaanse (1) indicated that spontaneous speech can be analyzed qualitatively and quantitatively Qualitative methods require researchers and clinicians to assess how fluent or how many grammatical errors the patient makes on a scale from 1 to 5. Quantitative analyses, instead, require researchers and clinicians to count the number of words per minute as a way to understand fluency and look at the number of grammatical errors (e.g., using a gerund instead of a finite verb in the sentence “*She wearing a red hood”). None of these methods is perfect, and choosing one method instead of another ultimately depends on the study goals. For example, qualitative methods are ecological instruments but generally they do not fulfil requirements for reliability and validity, whereas quantitative methods usually do fulfil these requirements, but they are extremely time-consuming.

Here we will focus on quantitative methods in people with neurological disorders. Let us imagine, for example, that we ask someone to describe the delicious breakfast that Little Red Riding Hood brought grandma on the basket:

“Little Red Riding Hood brought grandma lots of treats. She had hazelnuts, almonds, honey and ba ban ban bana banan banan bananas (that is a conduit d’approche, where we find fragments of the word banana, until we find the whole word), no wait … there were no bananas in the basket (we have a self-correction and a pause here!), emh ehm… I mean… (these are two hesitations and a filler), I mean apples, there were apples in the basket!”

This example highlights that in spontaneous speech speakers often change the structure of the sentence, interrupt the discussion and start over again, and add and/or replace words they have already said 23. To use a quantitative method, first, we should have a sample of spontaneous speech. Currently, there is no agreement as to how many words should a spontaneous speech sample have (1). Some researchers and clinicians used 150 words, others 300 words and others analyzed the whole sample. Despite that, once we have a spontaneous speech sample, we can explore multiple measures. The list of variables and errors can be endless. Here are some examples:

Quantitative analysis of spontaneous speech in people with neurological disorders

Spontaneous speech has been used to look at differences between healthy individuals and people with neurological disorders. Sometimes, these differences are difficult to grasp by only listening to a person with a neurological disease. However, when analyzed properly, these differences may respond to typical patient reports of difficulties making sentences, finding words, or making sense of a conversation. Here we present some examples of how spontaneous speech has been studied in people with stroke, Alzheimer’s disease, Parkinson’s disease, Levy body spectrum disorder, and Multiple sclerosis.

Rossi and Bastiaanse (3) studied verb production in Italian speakers with stroke. The authors asked participants to describe a picture and telling a story and found that participants produced fewer verbs and also showed a reduction of word choice compared to healthy controls. This leads the authors to discuss verb impairments in people with stroke, not only in formal tasks but also in more naturalistic settings.

Singh, Bucks, and Cuerden4 studied spontaneous speech in eight people with probable Alzheimer’s Disease and eight healthy participants. The task was to speak for 20-45 minutes about themselves. Quantitative analysis showed that individuals with Alzheimer’s disease had naming difficulties, decreased fluency (producing a reduced amount words per minute) and produced many phonological paraphasias compared to healthy individuals.

Vanhoutte, De Letter, Corthals, Van Borsel and Santens 5 examined language skills in people with Parkinson’s disease. Participants were asked to retell the text “Meneer Meijer” from a Dutch therapeutic program 6, however, with several adaptations in order to reduce memory and attention demands. Vanhoutte et al. found out that people at advanced stages of Parkinson’s disease had a reduction in lexical diversity in verbs, but not in nouns, highlighting a verb/noun dissociation. This has long been a topic of interest in the Neuroscience of Language.

Ash et al.7, studied speech production in people with Levy body spectrum disorder. The authors asked participants to tell a story after having a look at a child book, composed of a sequence of 24 drawings with no text. Quantitative analysis showed reduced speech rate, extended pausing, and additional time relative to a group of non-brain-damaged participants.

Arrondo, Sepulcre, Toledo, and Villoslada 8 investigated spontaneous speech in people with Multiple Sclerosis, as these people have been shown to have low results in different linguistic tasks. Arrondo et al. asked participants talk about their life for about half 30 minutes. Results showed a decrease in the number of words and in sentence length in this population compared to non-brain-damaged participants. Additionally, the authors argue that the person administering the task had to interact more with people with multiple sclerosis, in order to keep the conversation moving, as opposed to people without brain impairment.

In summmary, the use of spontaneous speech analysis for language assessments in people with different neurological has many advantages over more widely methodologies but also some caveats. Among its advantages, and in comparison with formal tasks, spontaneous speech resembles language abilities in daily life, it is easy to administer and fast to respond to, and the data allows a systematic and objective analysis of basic parameters of language production. Unfortunately, at this stage, some of its disadvantages are that the analysis of spontaneous speech is very time consuming and that it requires the input of a trained expert 9. Fortunately, spontaneous speech analyses have been used to assess the language processing of people with multiple neurological disorders and, luckily, automatic transcription and other analysis tools are under way, which should make quantitative this assessment technique much faster and replicable than it is today 1011.

How many animals can you name within one minute (and what does this say about your cognition)?