Author: Rosario Luque-Martín is pursuing a Ph.D. at the Department of Medical Biochemistry, Academic Medical Center, University of Amsterdam (The Netherlands) 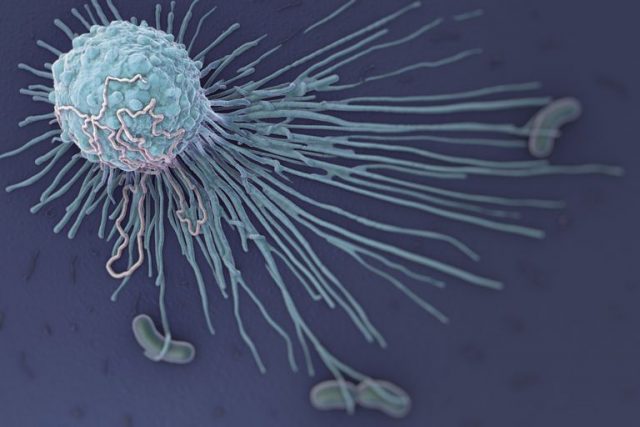 The immune system is composed of a considerable variety of cell types with different functions. One of the most important cells involved in the innate immunity are the macrophages. These cells have a wide spectrum of functions: from bacteria-killing function to wound healing properties. Classically the macrophages according to their functions have been classified in M1 and M2. The M1 or classical activated macrophages are related to defence function: Pro-inflammation and bacterial-killing functions carried out by the production of oxygen and nitrogen reactive species, the phagocytosis and the activation of other players of the immune system. The M2 are also known as alternatively activated macrophages and they have very different functions from the M1. Oppositely to the M1, they have wound healing functions and reduction of inflammation among other capacities. In order to activate a macrophage to each of these states different stimulus could be used, either in vivo or in vitro. For M1 the cytokine IFNγ in combination with LPS (a part of the bacterial wall) are needed. In the case of M2, the cytokines IL-4 and IL-13 are the signals used to induce this phenotype.

Even though the M1 macrophages are a really important defence in the immune system, these macrophages are also connected to a variety of diseases like autoimmune diseases, chronic inflammation, atherosclerosis, IBD (inflammatory bowel disease), etc. The M2 are also associated with diseases like cancer, where they are associated with a tumour protecting it from the rest of the immune system. These diseases and their association with different macrophages phenotypes are the reason why the capacity of changing this activation states could be really interesting in the treatment of different diseases. Having this idea in mind our group leaded by Professor Menno de Winther explored the possibility of changing an M1 activated macrophage into an M2 activated macrophage in a study performed by the team of Jan Van den Bossche 1.

For the experiments done in this study of plasticity between the M1 and M2 states, macrophages received a previous M1 stimulus (IFNγ+LPS) and then an M2 stimulus (IL-4), only an M2 stimulus (IL-4) or not stimulus at all. To check if the macrophages pre-treated were able to change from M1 to M2, different genes characteristic from M2 activated state were analysed, along with surface markers also associated with an M2 state. This idea was tested in vivo and in two in vitro models: bone marrow derived macrophages from mice and human macrophages derived from monocytes isolated from peripheral blood.

For both systems the results were similar. In mouse, the genes characteristic for M2 activation (Cdh1, Cdh1,Chi3l3, Mrc1 and Retnla) have a lower expression in the “transformed” M1 to M2 macrophage. In the human, the same results were found; The human genes characteristic for M2 macrophages (CCL22, CCL24, CD200R, CD206, FCER2)were lower in the pre-treated with M1 stimulus M2 macrophages than in the direct M2 macrophages, only treated with IL-4. A similar result was found again in the 2 species for the surface markers, lower expression in the pre-treated M2 than in the direct M2 macrophage. Being these markers for mouse CD71, CD206 and CD301, and CD23, CD200R and CD206 for humans. These same results were found in the in vivo model for this study. These discoveries would mean that a full transformation into an M2 macrophage is not possible if the macrophage has been stimulated towards M1 previously, meaning that these cells are not as plastic as it could be expected.

This affirmation, as normally happens in science, leads to another question: Why macrophages once they are activated to M1 cannot change to M2? The answer is in the metabolism.

It is known that M1 and M2 macrophages have a different metabolism; basically, the paths that they used to obtain energy from the nutrients that the cell receives are different.

The M1 or classical activated macrophages preferably perform aerobic glycolysis as the source of energy and molecules for biosynthesis. They use glucose and throw the glycolysis they generated a high amount of NADPH. This NADPH is a molecule that thanks to the enzyme NAPDH oxidases can be used in the production of reactive oxygen species (ROS). As it was mentioned before the production of this ROS is important in the defence-related functions of the M1 macrophages as the ROS kill bacteria. On the contrary, the M2 macrophages don’t have a high range of consumption of glucose as their way to obtain energy and molecules is based on fatty acid oxidation. As a summary is quite accurate to say that the M1 has a glycolytic metabolism whereas M2 has a fatty acid oxidative one 2. In order to be able to change from one state to the other macrophages should be able to reprogram the metabolism, an M1 should change to a more oxidative metabolism and the M2 to a more glycolytic one.

The main organelle needed to perform the metabolism of the fatty acid in the cells in the mitochondria. This organelle produces energy through the respiratory chain formed by four complexes that transfer electrons by redox reactions between them with the aim of obtaining energy in form of ATP molecules. After M1 polarization, the activity of the complexes II and I is suppressed and dampened in complexes II and IV, this situation is not reversible which causes that the M1 can’t change to an M2 phenotype.

With this study, an insight into the importance of the metabolism in all the aspects of the study the human body is shown.

Dark states can be much better excitation carriers

The 7 states of condensed matter at room temperature