Competitive markets are a well understood economic mechanism. The Economic Theory explains remarkably well, at least for a social science, its properties and success along economic history. We have lab experimentation (see here), and plenty of historical evidence that a market oriented society improves upon a non-market oriented one. It has happened in democracies like India, in left-wing dictatorships like China and right-wing dictatorships like Pinochet’s Chile. However, outside the lab, there are not many instances where we can track the changes from a planned or highly regulated system to a pro-market one in isolation from other changes. An early example of such description can be found in Radford (1945) 1, who documented the economics of German prisoner-of-war camps towards the end of World War II. First each prisoner received an allocation of goods from the Red Cross (central planning economy), then they traded their goods with each other (exchange economy) and used cigarettes as currency (monetary economy).

Prendergast (2017) 2 documents and analyzes a recently organized transition from a centrally planned mechanism to a market in a very specific sector: the distribution of food to the poor via food banks. Here is the story. 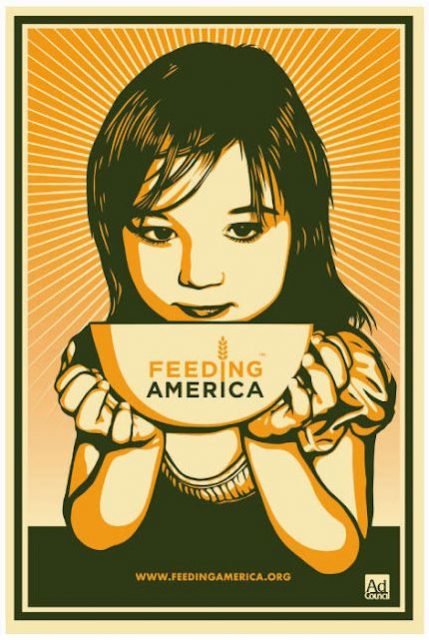 Feeding America is a nonprofit organization in the USA, which receives 300 million pounds of food a year from different donors, and that distributes them to the poor all across the United States via local food banks. Prior to 2005 the distribution was of the form “wait your turn”. Local food banks were queued according to a measure of how much food the bank had already received relative to the number of poor in the bank’s area. When Feeding America received a donation, it called the bank first in line to offer them the load. The bank had 4-6 hours to say “yes” or “no”, and if it said “no”, they called to the next in line. There were reasons why a bank might not want the load, among them the fact that they had to assume the transportation cost to pick it up the donor’s location. If the donor is too far or if the load consists of items that the bank does not need or cannot store properly, it may decline the offer. There are three additional characteristics that need to be mentioned to understand the rest of the story. First, under this system, all banks ended up receiving a similar product mix in average. Second, for the local banks the food provided by Feeding America was not the only source of donations, as each bank had their own local donors. Third, even if the bank turned down an offer, the system recalculated its position in the queue as if it was accepted. This was done to discourage “noes” in order not to upset the donors with long waits after their decided to offer a load. The objective of the mechanism was to assign an equal number of pounds of food to every poor, and the numbers show that this objective was accomplished with precision.

There were two major problems with the centralized system. First, some local banks received many more local donations than others and had different storage facilities. However, Feeding America did not have information about that. This means that banks are very heterogeneous in their need for different kinds of food. For instance, a food bank in Idaho will probability not need more potatoes, or one in Wisconsin may have no use for more dairy products. Second, the allocation system did not allow to offer a load but to a small number or banks, as each offer implied a waiting time of a few hours. To solve these inefficiencies, Feeding America put together a committee to redesign the system. The group consisted of eight food bank directors, three staff from Feeding America and four University of Chicago faculty. After discussions and initial reluctant positions, the committee suggested, and Feeding America adopted, what was called the Choice System, a market-based mechanism with food banks bidding on truck loads of food twice a day after the contents of the load are published. Next are some details.

Feeding America and, in general, all the people involved were concerned about the inequalities that a market based mechanism could generate among banks, as some of them are located in richer areas than others and will potentially collect money more easily. After all, they were correcting inequalities in a capitalist society. To avoid this, the system used its own currency called shares, that could only be used to buy food from Feeding America, who issued the fake money in the form of a number in an account for each bank. This ensured that all banks got the same shares per poor.

There was also a great concern that bigger banks could benefit disproportionally from the system. The auctions were “sealed envelope”, and did not require to spend time placing successive bids like in ascending auctions, so that small banks with little staff did not have to spend valuable time. Also, banks were allowed to borrow shares (under some conditions and limits to avoid increasing debt) to make sure that they were able to bid in every auction if needed. Finally, banks were also allowed to place joint bids for a load, which helped small banks that had use for only a fraction of it.

The sealed envelope auction also served the purpose of not letting the donors wait too long, as all banks were called at the same time, rather than one after the other. In addition, banks were allowed to bid negative prices, meaning that they would be paid to pick up a load, thus ensuring that less desirable loads were also timely taken from donors. Banks were even allowed to sell some of their stock coming from local donors.

The way the banks responded to the new allocation mechanism allows Prendergast (2017) to claim a success of the Choice System. One of the first things to notice is the great disparity of prices for the different kinds of food (and some non food items that were also offered). A pound of the most desirable items (cereal, diapers, pasta or prepared meat) could reach a price 40 times higher than a pound of the least demanded ones (produce, drinks and dairy products). This reflects the marginal value of these items for the banks after they received local donations. Banks in poor areas can thus get many more pounds of food if they concentrate their bids in the cheapest loads. The big difference between what the banks got with old system and what the get with the new one is a measure of the success. Other measures of success are the facts that smaller and poorer banks made use of credits from the Feeding America, and placed joint bids. Finally, banks in rich areas did not use all their shares and even put some of their stocks to sell. All this allowed poor banks to have more of everything even if they relatively bought more of the cheap items.

Reluctant directors of poor banks were in the end the most enthusiastic defenders of the Choice System.