During the last decades, the electronics industry has been very successful in pushing forward the advancement of electronic building blocks, but the limit of silicon-based electronic devices especially in terms of miniaturization are almost reached. There are many ideas how to overcome this problem, for example, by adding functionality based on approaches originating from molecular electronics, quantum electronics, or atomic scale spintronics.

In spintronics, new memory and logic devices are being developed based on the use of spins of nuclei, atoms, or molecules, instead of electronic charges. The main advantages are an improved energy efficiency and speed of operation to store and process information. The ability of molecules to maintain magnetic multistability in nanoscale junctions will determine their role in downsizing spintronic devices. 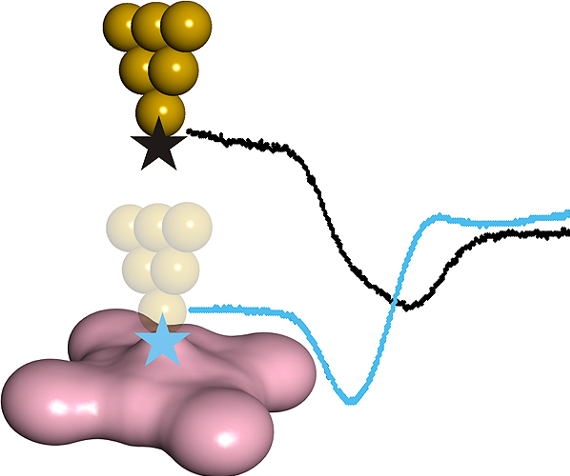 It is kown that spin-injection from ferromagnetic leads gives rise to magnetoresistance in metallic nanocontacts. Hence, it seems reasonable thinking that nonmagnetic leads probing the magnetic states of the junction itself could be an alternative. Extending this experimental approach to molecular junctions, which are sensitive to chemical parameters, an international team of researchers, including members of CFM and DIPC, now demonstrates 1 that the electron affinity of a molecule decisively influences its spin transport. These results pave the way for spin control using chemical design and electrical means.

The electron transport through molecular junctions is usually determined by the molecule-electrode contact geometry and the corresponding hybridization of molecular orbitals with the electrodes. Ferromagnetic electrodes, that provide spin-polarized current, are conducive to a stronger hybridization, which can even lead to the quenching of molecular spin in the junction. If the spin is not quenched, the coupling of the molecular spin to the electrode magnetization reduces its relaxation time.

This limitation does not appear to hold when nonmagnetic leads are used. There have been examples demonstrating the detection and control of magnetic anisotropy and spin state in two-terminal device geometry as well as in the junction of a three-terminal settings where electrical gating by a third terminal was used for stabilizing a particular state.

Structural changes may also affect molecular spin states or their conductance fingerprints. Actually, the researchers show that the polarizability of molecular ligands can provide control of the magnetic state in different transport regimes with no electrical gating required.

The qualitative differences between the molecules despite their electronic similarity can be traced back to their different electron affinities, which result from the different polarizabilities of the −OCH3 and −SO3H substituents. The affinity can be evaluated as the energy difference between the ground states of the anion and the neutral molecule. As expected, the −SO3H group is highly polarizable, more than the −OCH3 group, and the affinity of FeTPP−SO3H is 0.87 eV larger.

Consequently, FeTPP−SO3H easily captures and stabilizes one extra electron in an environment of increased electron density. On the other hand, the lower electron affinity of FeTPP-OCH3 preserves its spin even at contact. This work shows that a degree of control on the molecular magnetism can be achieved by judiciously choosing ligands and their electronic environment.