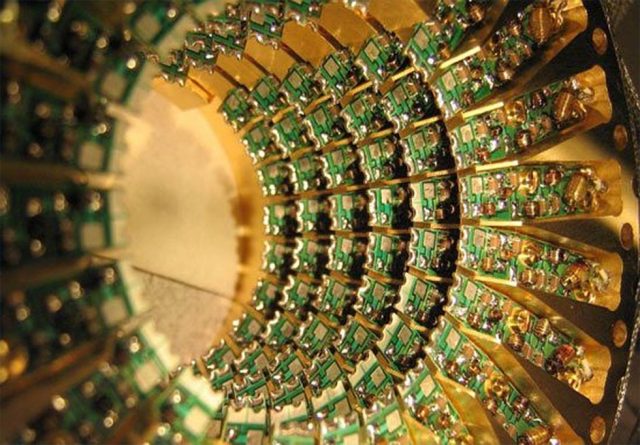 When quantum computing comes, it very likely will rely for the fast storage and processing of information on spintronics. Spintronics (from spin transport electronics) is a branch of technology that specifically makes use of quantum-mechanical spin, and especially of the transport of that spin, in electronic devices.

Spin is the part of the total angular momentum of an electron that is distinct from its orbital angular momentum. An electron, in a specified energy level, has a particular spin, just as it has a particular charge or mass. Because of their spin, electrons also have their own intrinsic magnetic moment and in a magnetic field this spin lines up at an angle to the direction of the field, precessing around this direction. In metals, the physical origin of the spin transport is drift and diffusion. Once injected the spins can be rotated by means of an external field or by the effect of spin-orbit coupling, i.e. by the interaction between the orbital angular momentum and the spin angular momentum of the electron.

Discoveries in the 1980s about spin-dependent electron transport phenomena in solid-state devices led to spintronics. From the very beginning the phenomena were found when electrons were injected (an electric current, that is) from a ferromagnetic metal to a normal metal or a superconductor. Actually, the remote origins of spintronics can be traced to the ferromagnet/superconductor tunnelling experiments in the 1970s.

Today ferromagnetic-superconducting structures are still revealing a rich physics from the interplay between magnetism and superconductivity with some unexplained experimental results that, if understood and controlled, could be important for the new computers. One of this puzzling findings is that in superconductors with a strong Zeeman splitting – so called because of the splitting of the lines of the spectrum when the source is placed in a magnetic field – a spin accumulation has been detected at relatively very long distances from the injector. Moreover, this spin accumulation can be created by injecting the current from nonferromagnetic electrodes.

A group of researchers from Aalto Universiy and Jyväskylä University (both in Finland), The Royal Institute of Technology (Sweden), and F. Sebastián Bergeret, Materials Physics Center (CSIC-UPV/EHU) and DIPC, have developed1 both a qualitative and a quantitative explanation to this phenomenon. They conclude that we are before a thermoelectric effect and that it may be possible that injected heat could be detected as an electric signal by a ferromagnetic detector.

Superconductivity is carried by Cooper pairs – usually described as correlated pairs of electrons – that move through the crystal lattice without resistance. A broken Cooper pair is called a Bogolyubov quasiparticle. The researchers find that the observed spin accumulation can be understood as a nonlinear thermoelectric effect for these Bogolyubov quasiparticles. On the other hand, the external magnetic field that induces the Zeeman splitting also generates an orbital depairing effect that results in the suppression of superconductivity. The observed behaviour of conductance as a function of the injection voltage is shown to depend on this orbital depairing.

This theoretical framework is able to quantitatively account for the experimental results (see Figure 1) with an overall excellent agreement. The only relevant discrepancies are found at large positive voltages and are likely due to electron-electron scattering; something that should be investigated in more detail.

As we have seen, superconductivity is not critical for the phenomenon so it seems likely that these results could be extended to other materials and be used at room temperatures. If this is so, we would have found a way to convert heat into a spin current, an astonishing efficient way of using the waste heat generated by the new generation of computers.

The spin texture of surfaces and electron scattering