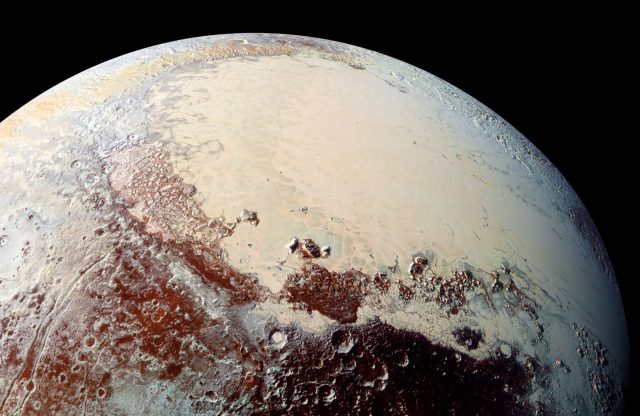 A billion comets may have played role in Pluto’s formation

A vast number of comets may have been involved in the formation of Pluto, according to researchers studying the dwarf planet’s Sputnik Planitia glacier plus data from New Horizons and the spacecraft that studied Comet 67P/Churyumov-Gerasimenko. “We found an intriguing consistency between the estimated amount of nitrogen inside the glacier and the amount that would be expected if Pluto was formed by the agglomeration of roughly a billion comets or other Kuiper Belt objects similar in chemical composition to 67P,” said Chris Glein, an author of the study published in Icarus.

Living on the ground 66 million years ago may have saved some ancient birds from the effects of the devastating asteroid strike that killed off their relatives that lived in trees. “It seems clear that being a relatively small-bodied bird capable of surviving in a treeless world would have conferred a major survival advantage in the aftermath of the asteroid strike,” said lead author Daniel Field.

Ultrasound used to manipulate neuronal activity in the brain also activates the auditory cortex no matter where the ultrasound is focused. Researchers studying the effects of ultrasound on brain activity in mice and guinea pigs were surprised when the auditory areas reacted as well.

A hydrogel developed by University of Florence chemists is helping remove damaging tape that was placed on ancient artwork and historical documents to repair tears. The gel is made mostly of water with small amounts of organic solvents that lift the tape’s adhesive from the paper fibers.

Treatments that can eliminate damaging proteins

Thalidomide and similar drugs being used to treat cancer work by using the body’s cell-disposal system to eliminate damaging proteins. Now, researchers are focusing their efforts on developing such protein degradation methods to treat a wider range of diseases, including Alzheimer’s and Parkinson’s.