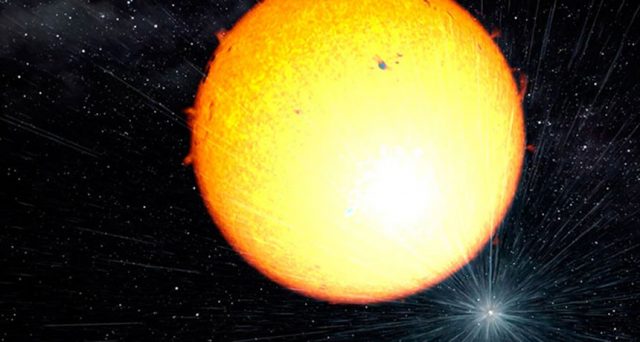 The close proximity of its companion star has helped researchers weigh a huge pulsar in the binary system PSR J2215+5135. Astronomers measured the temperature differences and the Doppler shift on the two sides of the pulsar’s companion star to discover that the pulsar weighs more than twice the mass of our sun.

Two kinds of water can be found because the hydrogen atoms can be arranged in a couple of ways, thanks to quantum spin. The two hydrogen atoms in each molecule can either spin the same direction, resulting in ortho-water, or in different directions, resulting in para-water. It has been now found that the two versions do have different chemical properties.

Dogs love your baby talk, if you’re talking about treats and toys

People who use a kind of baby talk to speak to their dogs about favorite items such as treats and toys might have a good reason for doing so — research suggests that dogs respond to it. Researchers report that dogs responded to language that combined exaggerated intonation with favorite words such as “walk” in a way they didn’t when exposed to flat intonation plus favorite words, or exaggerated intonation involving mundane words.

Researchers have created an artificial nerve that responds to pressure, which may one day lead to a new class of prosthetics that better mimic biological nerve systems. The device combines pressure sensors, ring oscillators and a transistor, and it was used to stimulate movement in a detached cockroach leg.

Scientists have replicated the human cornea using a 3D printer and a special ink made from donor cornea stem cells, collagen and the algae substance alginate. “Our unique gel, a combination of alginate and collagen, keeps the stem cells alive whilst producing a material which is stiff enough to hold its shape but soft enough to be squeezed out the nozzle of a 3D printer,” said study leader Che Connon.