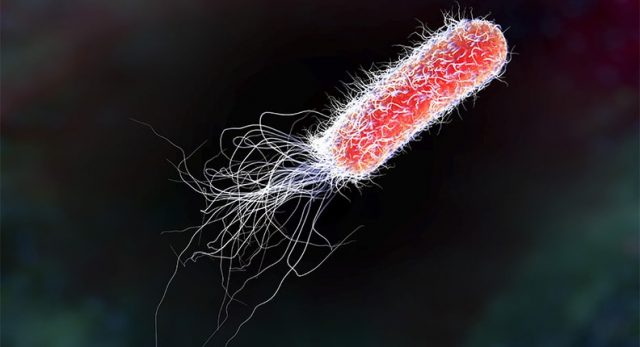 Uropathogenic Escherichia coli (UPEC) is responsible for approximately 90% of urinary tract infections (UTI) seen in individuals with an ordinary anatomy. In ascending infections, fecal bacteria colonize the urethra and spread up the urinary tract to the bladder as well as to the kidneys (causing pyelonephritis), o or the prostate in males. Because women have a shorter urethra than men, they are 14 times more likely to suffer from an ascending UTI.

Bacteria initiate infection by mechanical anchoring to tissues. In the case of UPEC bacteria use long appendages called pili type 1 to attach to cells of the bladder epithelium. For successful attachment, the mechanical integrity of the pilus is crucial.

The pilus is composed of four different subunit types (Figure 1), FimA-FimF-FimG-FimH, and it is believed that all subunits and particularly their intermolecular interactions, play an important role in the attachment of the bacterium by providing mechanical resistance to the whole pilus. However, we still do not have a complete quantitative understanding of the intermolecular interactions responsible for the mechanical design of the pilus.

Pilus domains have an immunoglubulin-like structure, typical of proteins with high mechanical stability. Thousands of FimA subunits form the pilus rod, a helical structure with spring-like properties connected to the tip fibrillum composed by FimF-FimG-FimH. The attachment to the epithelium tissue occurs by a specific binding called catch-bond of FimH to D-mannose. This attachment initiates the internalization and biofilm formation.

Nevertheless, a detailed description of the pilus mechanical architecture and subunits interconnection has not been reported yet. The β-strand complementation mechanism is the result of a highly coordinated process in which periplasmic FimC acts as a β-strand donor directing the complex FimC-subunit to the FimD usher located at the bacterium outer membrane. There, the polymerization of subunits by β-strand exchange and final pilus secretion occurs. This process of subunit polymerization has been described in detail with crystallographic and computational studies.

Prior to the pilus assembly, the subunits undergo an oxidative folding process catalyzed by the oxidoreductase DsbA. This enzyme encounters the subunits in the periplasm as they are secreted in an extended state. Oxidized subunits are then delivered for FimC recruitment to the FimD usher through a mechanism called donor-strand exchange. A kinetic model for the folding of pilus subunits has been proposed based on bulk assays, but an observation of the folding process in real time has not yet been achieved experimentally. There is a lack of detailed information regarding the stability of the Fim domains and how they achieve such stability.

Now, a team of researchers has used 1 a single-molecule atomic force microscope (AFM) complemented with Steered Molecular Dynamics (SMD) simulations, which give an atomic-level view of the unfolding process, to investigate the mechanical interactions and formation of the pilus domains.

The researchers have found a hierarchical mechanical organization of the pilus, in which the resistance of the subunits to force decreases from the pilus rod to the tip. The extraordinary resistance is achieved by a folding process of pilus subunits assisted by DsbA and FimC.

The scientists monitored this process on single Fim domains confirming the one described above. However, by the direct conversion of individual pilus subunits from the fully extended to the folded state, they find that DsbA not only acts as an oxidoreductase but also as a chaperone, assisting pilus subunits in their folding.

This knowledge will help to develop new therapeutical mechano-drugs that target the strength of the donor-strand complementation. Today, traditional antibiotic treatments are becoming less effective due to the appearance of resistant strains. Targeting some of the main actors involved in pilus mechanochemistry could be another therapeutic approach.

A new type of arthropod-inspired cameras