The revolutionary theory of topological quantum chemistry 1, a description of the universal global properties of all possible band structures and materials, diagnoses topological phases based on elementary band representations. A set of bands is topological if it lacks an “atomic limit” that obeys the crystal symmetry (and time reversal, if desired): formally, an atomic limit exhibits a set of localized, symmetric Wannier functions, the counterpart of localized molecular orbitals for crystalline systems . This definition includes all known topological insulating phases.

If a set of bands, separated by an energy gap from all other bands, does not transform as a band representation, it does not have localized, symmetric Wannier functions; consequently, it is topological .

The theory of topological quantum chemistry also brings to light the different types of trivial-to-topological phase transitions, distinguished by how many symmetry-distinct orbitals contribute to the topological bands. For example, the Kane-Mele model of graphene requires only one type of symmetry-distinct orbital (the two spinful pz orbitals per unit cell are related by the honeycomb lattice symmetry), while the trivial-to-topological transition in HgTe requires both s and p orbitals to create a “band inversion.” These two types of topological insulators differ in their atomic limit as the distance between atoms is taken to infinity: in the atomic limit of graphene, the band structure consists of a single flat and fourfold degenerate band, corresponding to a single EBR. In contrast, in HgTe, the atomic limit will consist of two flatbands, one each for the s and p orbitals, corresponding to two distinct EBRs. 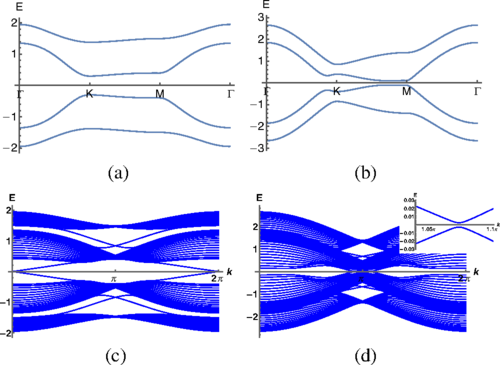 The team of researchers has focused on the graphene-like case: topological insulators that derive from a single orbital and its symmetry-related partners. In the language of band representations, the conduction and valence bands together transform as a single EBR; consequently, either the conduction or valence bands (or both) lack an atomic limit and are topological.

The researchers introduce models for a symmorphic and a nonsymmorphic space groups. A space group is called symmorphic (or split) if there is a point such that all symmetries are the product of a symmetry fixing this point and a translation.

The symmorphic example describes px,y orbitals on the honeycomb lattice. Without spin-orbit coupling, the band structure can be a (gapped) topological crystalline insulator. With infinitesimal spin-orbit coupling and time-reversal symmetry, the system exhibits a nontrivial ℤ2 index.

The scientists are motivated to explore the nonsymmorphic example because, as part of their ground-breaking work on the connectivity of energy bands, Michel and Zak conjectured that spinless EBRs in nonsymmorphic space groups cannot realize a gapped band structure. This new results are a counterexample to Michel and Zak’s claim.

Thus, for each example, a topological invariant is constructed to explicitly demonstrate that the valence bands are nontrivial.. In doing so, they find a new topological invariant in a nonsymmorphic space group: a Dirac cone in the Wilson loop spectrum and a Wilson loop that winds along a bent path. As a plus, they also introduce the notion of a weak symmetry indicator.

How to create a band gap in graphene using lead

Topology as a parameter: an artificial electronic high-order topological insulator