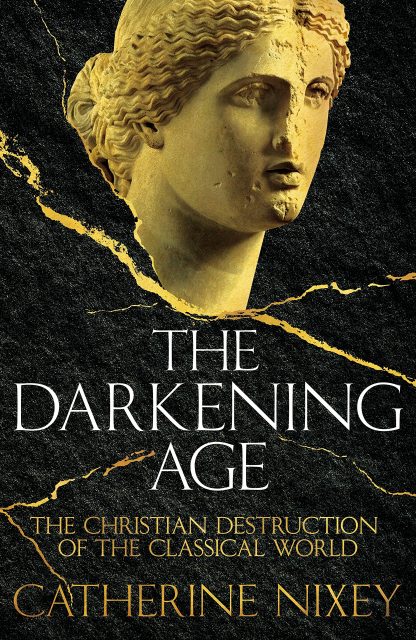 One book that has caused much stir in the past months is Catherine Nixey’s The Darkening Age: The Christian Destruction of the Classical World. I confess I approached the book with some skepticism, for ‘the classical world’, I thought, was already considerably ‘destroyed’ by the time Christianism became the official, and soon the only legal religion of the Roman Empire. By ‘classical world’ I was in particular thinking of Ancient science and philosophy, that by the time of Constantine the Great (306-337 AD) were several centuries after their major glories (the obscure mathematician Diophantus of Alexandria, died at the end of the 3rd century AD, had probably been the last, and the most solitary, of their greatest geniuses). But also the arts and the literature of the late Roman Empire are, to our sight, very far from the perfection of a Virgil, a Horace, an Apollodorus, or a Praxiteles. My impression, hence, was that the ‘classical world’ was dying, and would have very likely disappeared equally with or without the push of Christianism, more or less around the same time. If Christians contributed to that ‘destruction’, it wouldn’t have been with more strength than the many other historical forces that were actually preventing that Archimedes was immediately or very nearly continued by a Galileo, Seneca by a Shakespeare or Fidias by a Buonarotti.

Reading Nixey’s book made me think it twice. For example, she shows that, even if there had not been any new Plautus, Ovid, Aristotle or Epicurus in the first centuries AD (perhaps with the exception of Plotinus), the texts of the ‘classics’ were regularly copied, studied and transmitted well into the 4th century, and that it was the expansion of Christianism the main responsible factor of the more or less sudden lost of interest in their preservation, and hence, of the definitive loss of the biggest part of their works (even if the tiny surviving fraction was conserved, centuries later, by Christian monks). She cites, for example, the later saints John Chrysostom and Augustine, who in the turn of the 5th century boasted with delight of the ‘obliteration’ and ‘suppression’ (it’s the saints’ words) of the books and doctrines of the Greek philosophers, most particularly the Stoics and the Epicureans. The well-known episode of the closing of the Athenian philosophical schools by the Byzantine emperor Justinian in 532 AD, was probably nothing but the coup de grace to the few surviving pagan scholars of the time. It was a triumph, certainly, the triumph of Christianity, but, as Nixey remembers us, even the word ‘triumph’ itself (that was the term that Christian authors of the time were using to refer to their new hegemonic position) had a precise meaning for the people of the Roman empire:

“A true Roman triumph wasn’t merely about the victory of the winner. It was about the total and utter subjugation of the loser. In a true Roman triumph the losing side was paraded through the capital while the winning side looked on at an enemy whose soldiers had been slain, whose possessions had been despoiled and whose leaders had been humiliated. A triumph was not merely a ‘victory. It was an annihilation”.

The Darkening Age takes us through a tour of some representative episodes of resolute destruction of temples, statues, books, and people, from the masses of zealots attacking and devastating the magnificent temples of Athena in Palmyra, of Artemis in Ephesus, and of Serapis in Alexandria (some of the most impressive buildings of the world at the time) by the end of the 4th century, to the numerous bands of what today would receive no other name but ‘terrorists’ that proliferated in some regions in those times; some, like the ones known as ‘circumcellions’, looking for martyrdom by provoking the authorities, and others, like the Egyptian proto-cenobite St. Shenoute, devoutly entering their neighbours’ houses to destroy the non-Christian shrines, statues or books; or, more infamously, the Christian crowds that assaulted, tortured and killed the Alexandrian philosopher and mathematician Hypatia (about whom and her work, by the way, and sadly, we know scarcely anything else). The sheer accumulation of dismal episodes like this in the book has provoked that many critics despise it at just an example of biased, bigoted and sensationalist historiography, her author being actually a journalist rather than a professional historian. But, though Catherine Nixey does not conceal his antipathy for the Christian enemies of paganism, the fact is that the episodes of bitter destruction did take place, as archaeology amply demonstrates, if we needed more proof than the careful reading of the very same Christian authors that bragged about the triumph of their faith over the awful demons they saw in the pagan cults and practices.

Nevertheless, being curious about the amount of bias in Nixey’s book, I have turned to other less vitriolic authors that, in some recent publications, have also documented the same period. In particular, somebody recommended me Candida Moss’ The Myth of Persecution, James O’Donnell’s Pagans: The End of Traditional Religion and the Rise of Christianity, and particularly one of my favourite specialists, Bart Ehrman’s The Triumph of Christianity. To make a long story short: it is true that there were no real ‘persecution of pagans’ under the Christian Roman emperors, but rather an increasingly hostile environment, one in which, as more and more people converted to the new religion, it was more and more difficult for the remaining ‘pagans’ to keep their own social networks and institutional pre-eminence, and so, probably, we might bet that most of the ‘conversions’ to the Christian faith in late Antiquity took place, if not out of sincere religious beliefs, at least ‘voluntary’ in the sense that it paid off from a social point of view. However, part of the reason why being a pagan was becoming less and less profitable between the 4th and 6th centuries was that Christians applied a ‘politics of terror’, both through occasional actions like those mentioned in the previous paragraph, and through the dissemination of an ideology of terror: fear to the demons that according to them the old gods were, and above all, fear to the brutal and excruciating punishments that awaited in the afterlife to those that didn’t follow with the maximum rigour the commands of the Church. As St. Augustine himself confesses (cited by Ehrman):

“Very rarely does it happen that someone comes to us with the wish to become a Christian who has not been struck by some fear of God”.

Another relevant fact all these books establish, one as very well-known as little advertised, is that Christians were far from being systematically persecuted in the times before Constantine’s conversion, i.e., in the approximately two centuries and a half having passed since the preachings of Jesus and Paul. Even Origen of Alexandria asserted by mid of the 3rd century that “only a small number of people, easily counted, have died for the Christian religion” (cited again by Ehrman). Christianism was very often seen with suspicion and mistrust by the Roman citizens and authorities, and some scattered episodes of public repression and rioting may have happened between the (far from historically certain) Nero’s chasing of Christians in the capital in 64 AD, and the first systematic and clearly documented persecution by the emperor Decius in 250 AD, two hundreds years later. But even the ‘great’ persecutions of Decius (which probably was not specifically addressed against Christians), Valerian (257) and Diocletian (303-306), were not implemented with the most atrocious rigour but in a few cities of the empire (particularly more in the East than in the West, apart from Rome itself), and even taking into account this, the number of Christians actually martyred by the Roman functionaries seems to have been incredibly low, compared with the mythical image of thousands of followers of Jesus thrown to the lions as a matter of course during Roman festivities. This is not a discovery of contemporary historians: suspicion that most of the stories of ancient martyrs were forgeries started with the introduction of the critical historical method by the Jesuits scholars Rosweyde and Bolland in the 17th century, and by the end of that century the book De paucitate martyrum (‘On the small number of martyrs’) was published by the Irish theologian Henry Dodwell.

Surely, much more Christians must have been killed or tortured before Constantine’s Edict of Toleration (313) than the ones we can document with some certainty (which are probably less than a dozen), but being killed and tortured was not precisely something alien to the times, for Christians and for pagans alike.

One last point I would like to rise is the curious change of the rhetoric of Christian apologetics before and after Constantine’s conversion. If till the times of the last persecutions what the Fathers of the Church demanded to the authorities was mainly tolerance, saying that they have the same right to live according to their faith than the practitioners of other cults, once Christians established themselves with some security in power they started to replace the language of tolerance for the discourse of exclusivity. As Ehrman notes, probably this mainly had to do with the peculiar belief Christians had of possessing the Absolut Truth, and with the importance they attached to being literally certain on the very phrasing of their dogmas (though two millennia have passed with Christians themselves failing to agree on which ones amongst them possess the real Truth), but I think that the nude benefits of power are a much more verisimilar reason for their change of attitude towards the matter of toleration.

O’Donnell, James (2015). Pagans: The End of Traditional Religion and the Rise of Christianity. New York, HarperCollins.

How Buddha became a Christian saint

History and legend in the origins of Islam (I)

The conflict between science and religion as an “invented tradition”