Last February I published my first scientific article as principal author in Physical Review B 1. This article summarizes a big part of my work as a PhD student, a journey that has not been easy. The first version was sent to the journal a year ago; in between many things happened: new experiments, discussions and ten different versions of the article.

This post is intended to be an outreach summary about the publication, since the jargon and technical parts could complicate the understanding of the articles to those not familiar with the field of superconductivity.

¿Can we enhance the critical temperature of these materials?

As surprising as it can be, the critical temperature of these materials can be modified by reducing the sample size to about a million times the size of the objects we are used to handle every day. For instance, if we make tin thin films with a thickness of only 100 atoms, or we manufacture nanowires or nanoparticles a few nanometres in size we observe that the critical temperature increases from -269 ºC to -268.5 ºC, it is not much but it is better than nothing. However, if we do the same but using lead instead, the critical temperature does not change at all 3.

Why does the critical temperature increase in some materials and decreases in others?

Superconductivity is caused by the interactions between atomic vibrations (phonons) and electrons in a lattice. The interaction strength is determined by the electron-phonon coupling constant. Determining how this interaction changes as a function of size allows us to determine how the critical temperature changes with size too.

To study the electron-phonon interaction we fabricated Sn nanowire arrays with diameters of 18, 35 y 100 nanometres inside the pores of an aluminium oxide matrix. A scanning electron microscope image of the 100 nm nanowires is shown below.

Then, we determined the critical temperature of eight different simples, and we observed that it increased as the diameter of the nanowires decreased. 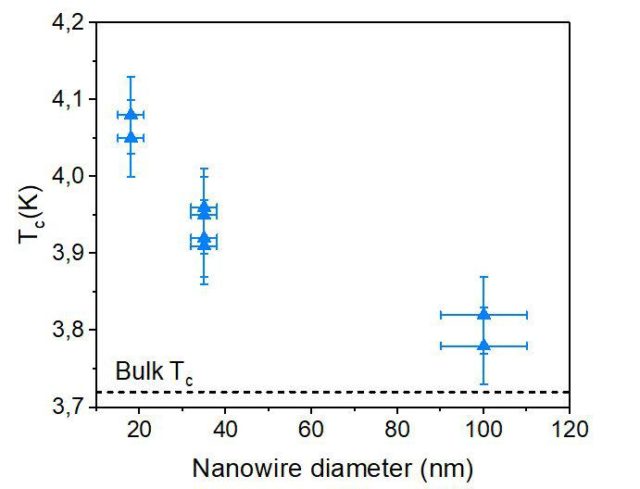 The next step consisted on measuring the electron phonon coupling constant; however, it was not easy since nobody had ever measured this parameter in nanowires with such a small diameter. In order to do this experiment, we travelled to Advance Photon Source (APS), a particle accelerator (synchrotron) located in the outskirts of Chicago. This was the only place in the world capable of doing the required experiment. Contrary to the Large Hadron Collider, APS accelerates electrons in a circular orbit which causes them to emit s X-rays that can be focused and used to measured different materials properties.

We used APS to measure the phonon density of states F(E), a quantity that tell us about how many different vibration modes exist as a function of the vibration energy. The image below shows the phonon density of states for the 18, 35 y 100 nm samples. In addition, we measured a bulk sample in order to compare non-nanostructured sample. Comparing the nanowires with the bulk material it is clear that the ways the atoms vibrate inside the nanowires are different from bulk. 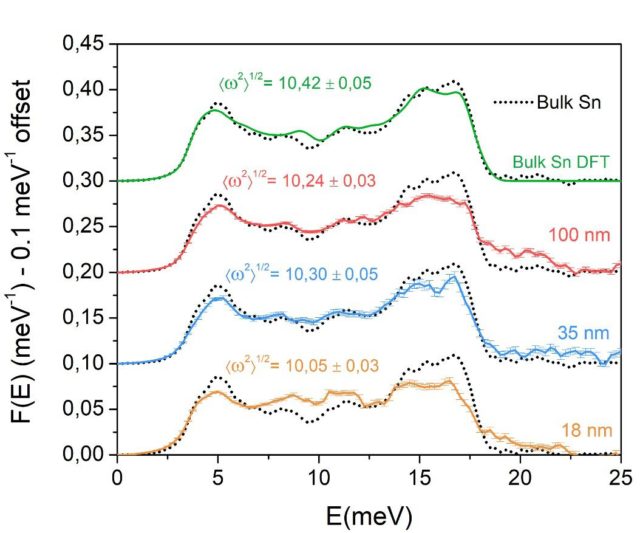 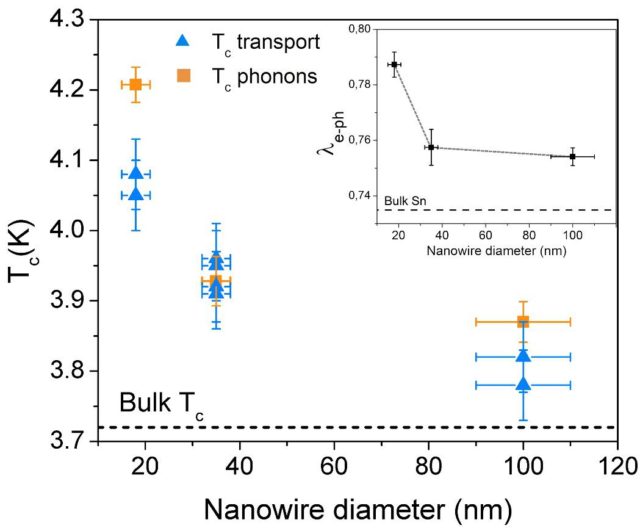 What happens to other elements such aluminium, lead or niobium?