The discovery of superconductivity in 2D films dates back over 80 years. Initially, these were 2D metallic films deposited on inert substrates, but in recent times more exotic 2D systems have exhibited superconducting properties, such as the surface of topological insulators or twisted bilayer graphene.

Superconductivity is caused by the interactions between atomic vibrations (phonons) and electrons in a lattice. The interaction strength is determined by the electron-phonon coupling constant. Still, the theoretical explanation of the mechanisms involved in these surface and 2D systems is not clear, and even the role of electron correlations versus the electron–phonon interaction is not well understood.

One parameter that has proven to be useful in describing conventional superconductivity in the bulk is the mentioned electron-phonon coupling constant. Now, a team of researchers show that the electron-phonon coupling constant can be measured in the surface region with helium atom scattering experiments, thus enabling a measurement of this useful parameter specific to the 2D surface region.

A unique feature of low-energy HAS is that the atoms scatter not from the atomic cores of the target surface, but from the rarefied density of electron states whose wave functions extend outward in front of the outermost layer of surface atoms. Thus, the scattered atoms sense the structure and phonon vibrations of the surface atomic cores only through their contributions to the electron density outside (roughly about 3 Å above) the terminal surface layer. Inelastic HAS has been shown to be proportional to the mode-selected components of the electron−phonon coupling constant.

For metal crystal surfaces, inelastic scattering can even detect surface modes for which the largest core displacement amplitudes are located several layers beneath the outermost terminal layer, a property that has been called the quantum sonar effect. With this experimental technique, subsurface phonons were detected on multilayer metallic structures exploring the fairly long range of the electron-phonon interaction, for example, spanning as many as ten atomic layers in Pb films .

Under reasonable approximations, from the thermal attenuation of the diffraction peaks ruled by the so-called Debye–Waller factor as well as the interaction range through the number of layers, experimental values for some variables can actually be extracted which agree fairly well with previous values for the bulk or obtained from other surface techniques. 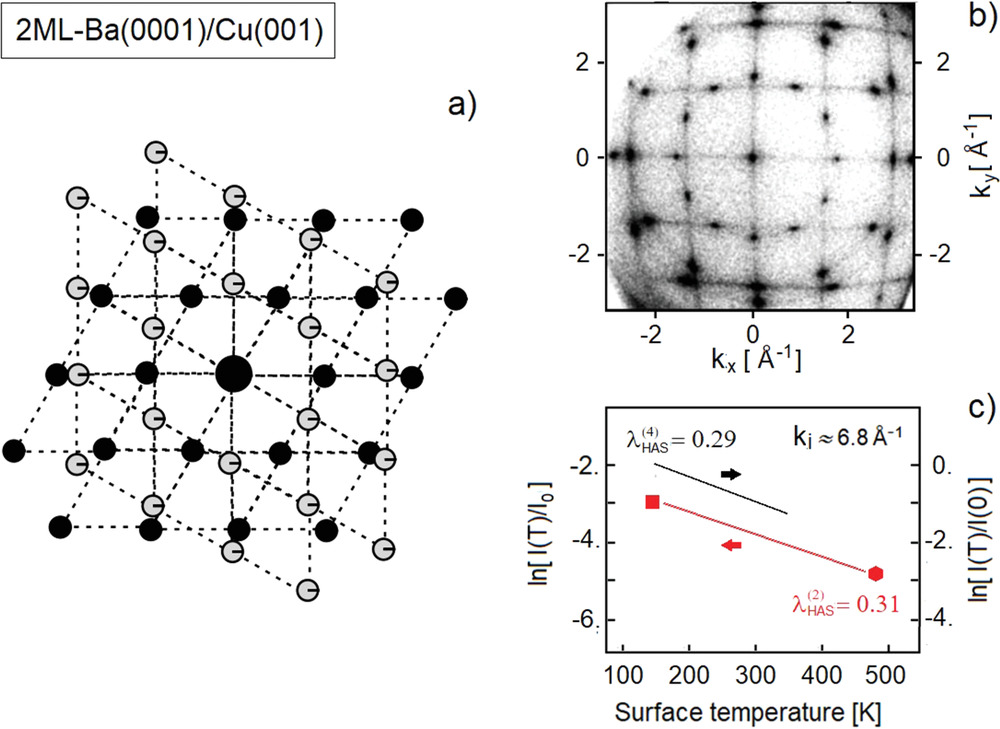 Now, a team of researchers has focused 1 on the specific role of dimensionality in the electron-phonon mass-enhancement factor as derived from HAS. They are able to extract values for this factor from HAS data for different classes of conducting surfaces characterized by nearly free-electron gases of growing dimensions, from the quasi-1D systems such as W(110):(1 × 1)H and Bi(114), and the quasi-2D layered chalcogenides, to quasicrystalline surfaces such as the dodecagonal 2ML-Ba(0001)/Cu(001) and decagonal d-AlNiCo(00001), which can be regarded as behaving like periodic 4D and 5D materials, respectively.

The analysis of thermal dependence of the Debye–Waller factor measured in the scattering of atoms is based on a theory originally developed for obtaining electron-phonon coupling constant for metal surfaces, adapted now to the more complicated cases of layered chalcogenide semiconductors and systems that can be considered as having different dimensions.

The new analysis shows that, with suitable interpretation of the theory, values of the constant can be obtained from the surfaces of these more complex systems. For all of these systems, the values of the mass-enhancement factor obtained from atom-surface scattering experiments compare favorably with established values for the bulk materials as published in the literature.