An electric current can be visualized as a flow of electrons through a conducting piece of material. The less the resistance the material structure opposes to the flow of electrons the better a conductor it is. Part of this resistance appears at the surface, where electrons first encounter the material; as with electromagnetic radiation – electrons are a particle and a wave – electron scattering occurs, and part of the electrons are bounced back to the direction from which they came. This effect, called backscattering, makes the electric current very sensitive to defects and characteristics of the surface.

The spin-orbit interaction (SOI), between the orbital angular momentum and the spin angular momentum of an electron, can dramatically influence electron scattering on the surface of crystalline compounds to the point of quenching backscattering. The absence of backscattering makes not only an electric current less sensitive to defects in the material, it also facilitates the generation of spin currents, the flow of electron spin. This is most interesting for spintronics applications, where spin currents are the analogues of electric currents in electronics.

The so called spin texture at a surface is characterized by the Rashba effect, a splitting of the spin-up and spin-down states in energy and momentum, and the effect of SOI at the surface can be qualitatively described by the Rashba-Bychkov model. The Rashba effect, discovered in 1960, was the basis for the spin transistor by Datta and Das in 1990, which has greatly influenced the field of spintronics.

SOI combined with exchange or Kondo interactions in noncentrosymmetric two-dimensional (2D) systems is the basis for novel magnetic materials with spin-polarized carriers at the surface. The underlying phenomena are the momentum-dependent spin-orbit splitting of 2D states governed by the Rashba effect and the Zeeman-like exchange splitting, whose simultaneous action brings about an exotic spin structure very different from textbook examples.

The Rashba effect significantly influences the spin properties of the carriers in magnets even when the exchange interaction is much stronger than SOI. The SOI-induced splitting and in-plane spin-momentum locking often deviate from the prediction of the classical Rashba model. 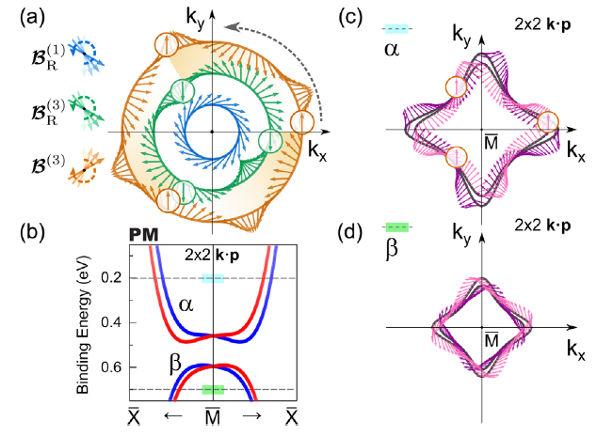 Now, a team of researchers shows 1 that the spin structure of the surface-electron state trapped at the Si-terminated surface of the antiferromagnet TbRh2Si2 exhibits an unusual spin texture characterized by a triple winding of the electron spin along the fourfold-symmetric constant energy contour. This surface state spreads over four atomic layers that create the non-centrosymmetric surface block Si-Rh-Si-Tb. There, this 2D state experiences both spin-orbit coupling due to the Rh atoms and exchange magnetic interaction with the ordered Tb 4f magnetic moments.

The researchers find that the spin-orbit interaction on the Rh atoms leads to an in-plane spin-momentum locking with the triple winding of the electron spins caused by an exotic cubic Rashba mechanism. Its essential property is a fast rotation of the electron spin along the Fermi surface, which is three times faster than in the classical Rashba effect!

This surface state presents another curious property: its exotic spin structure apparently survives and remains intact when the material transfers from the paramagnetic to the antiferromagnetic phase. In the latter, the Tb 4f magnetic moments become magnetically ordered perpendicular to the surface and create a strong exchange magnetic field. The triple winding of the electron spins within the surface turns out to be rather robust, although the spin-orbit coupling at the Rh atoms is substantially weaker than the out-of-plane exchange field due to the Tb 4f magnetic moments.

Importantly, the antiferromagnet TbRh2Si2 belongs to the large family of materials crystallizing in the ThCr2Si2 tetragonal structure. The authors anticipate that the discovered phenomena may be further studied in this wide class of materials, which might offer a tunable platform to investigate in depth the properties of the cubic Rashba effect. For example, the strength of the spin-orbit coupling can be tuned by changing the transition metal atoms in the material. The manipulation of the orientation and strength of the exchange magnetic field may be achieved by rotation of the 4f moments through coupling to a crystal-electric field, e.g. by using Dy or Ho as the rare-earth element. Besides, some of the ThCr2Si2 systems reveal Kondo physics, heavy-fermion behavior and mixed-valent properties. These fundamental interactions apparently give lot of further degrees of freedom to manipulate the unusual magnetism at the Si-surface and in particular with the cubic Rashba effect.

Author: César Tomé López is a science writer and the editor of Mapping Ignorance. This text is based on an outreach note by Denis Vyalikh.

An ideal candidate to investigate nanoscale ferromagnets and exotic interfaces