Body odor is present in all mammals, including of course humans. It has a clear genetic basis, although it is modulated by different conditions, both normal and pathological. Interestingly, although it is believed to have an important communicative function and to be involved in sexual attraction, body odor is considered unpleasant by most people, which seems a bit contradictory.

Human beings use body odor as an unconscious way to identify a partner who has a good chance of being a favorable parent for their offspring. It is believed that body odor carries clues about the quality of a person’s genes, health, and reproductive success. Although in principle no one would claim it, studies of heterosexual women have concluded that body odor is a defining factor in their attraction to men, superior to their physical appearance 1. The conclusion is that humans do not only use sight and hearing, a good conversation is a powerful aphrodisiac, but that smell also plays a key role in the attraction of a partner.

The composition of body odor is modulated by diet, gender, health status, and the medications we take, and is primarily due to the action of human bacteria on skin secretions. Humans have three types of glands in the skin: eccrine sweat glands, apocrine sweat glands and sebaceous glands. The former are present from birth, while the latter two start working after puberty. The eccrine glands are found in high density throughout the body, open directly on the skin surface and are essential for thermoregulation. In contrast, the apocrine glands open in the hair follicles and often appear in high density in specific locations of the body: armpit, nipple, and external genitalia.

Body odor is based primarily on the secretion of the apocrine sweat glands, which generate a number of substances that are metabolized by the skin microbiota. Staphylococcus, Cutibacterium (formerly Propionibacterium) and Corynebacterium are the dominant genera that colonize the armpit, with recent metataxonomic studies highlighting the additional presence of Gram-positive anaerobic cocci

(GPAC), in particular the genera Anaerococcus and Peptoniphilus. The result of the biological activity of these microbes is various chemicals that give each individual his/her characteristic smell. The most characteristic body odour producing site is the armpit and some of the most annoying odors, described as pungent, acrid or caustic, are thioalcohols, alcohols bound to one or more sulphur groups. Thioalcohols, despite being present in trace amounts, are the most pungent volatiles, with a smell that was described as a mixture of cheese and onion. Therefore, these molecules are not produced directly by humans but are actually the result of microbial activity on secretions found on the skin.

A research team led by Gavin Thomas has studied the main component of underarm odor and has seen that it is generated by the action of a specific enzyme produced by a particular species of bacteria 2. The enzyme is present only in the staphylococci that generate body odor, which are the only ones capable of breaking down odorless molecules to generate thioalcohols. The precursor is Cys-Gly-3M3SH.

The researchers used phylogenetics, biochemistry and structural biology to demonstrate that cysteine-thiol lyase, a pyridoxal phosphate-dependent enzyme, moved horizontally into a unique monophyletic group of odor-forming staphylococci about 60 million years ago, and has subsequently tailored its enzymatic function to human-derived thioalcohol precursors. Bacteria take the Cys-Gly-3M3SH and consume part of it but the rest, 3M3S, is expelled to the outside and that is one of the key molecules for the characteristic human pungent odor.

The researchers looked at a wide variety of Staphylococcus species and, to their surprise, found that only one, coagulase-negative Staphylococcus, was responsible for generating the pungent component of body odor. Strikingly, Staphylococcus epidermidis, the dominant staphylococcal species present on the skin including the axilla, nor Staphylococcus capitis nor Staphylococcus aureus do not metabolise Cys-Gly-3M3SH. The staphylococci that general thioalcohols probably received the enzyme from another bacterium, likely from a Bacillus-like ancestor.

To prove that this enzyme was primarily responsible for this characteristic odorous signature they transferred the enzyme to another species of the microbial community, Staphylococcus aureus, and saw that this species, which is a common component of the skin microbiota and does not generate any odorous molecules, began to produce that characteristic unpleasant body odor. The next part is an unknown, we know how the body odor is produced, but we have not discovered why. All we know is that our olfactory system is very good at detecting thioalcohols at very low concentrations, which may make them very important for locating, identifying and selecting other human beings. 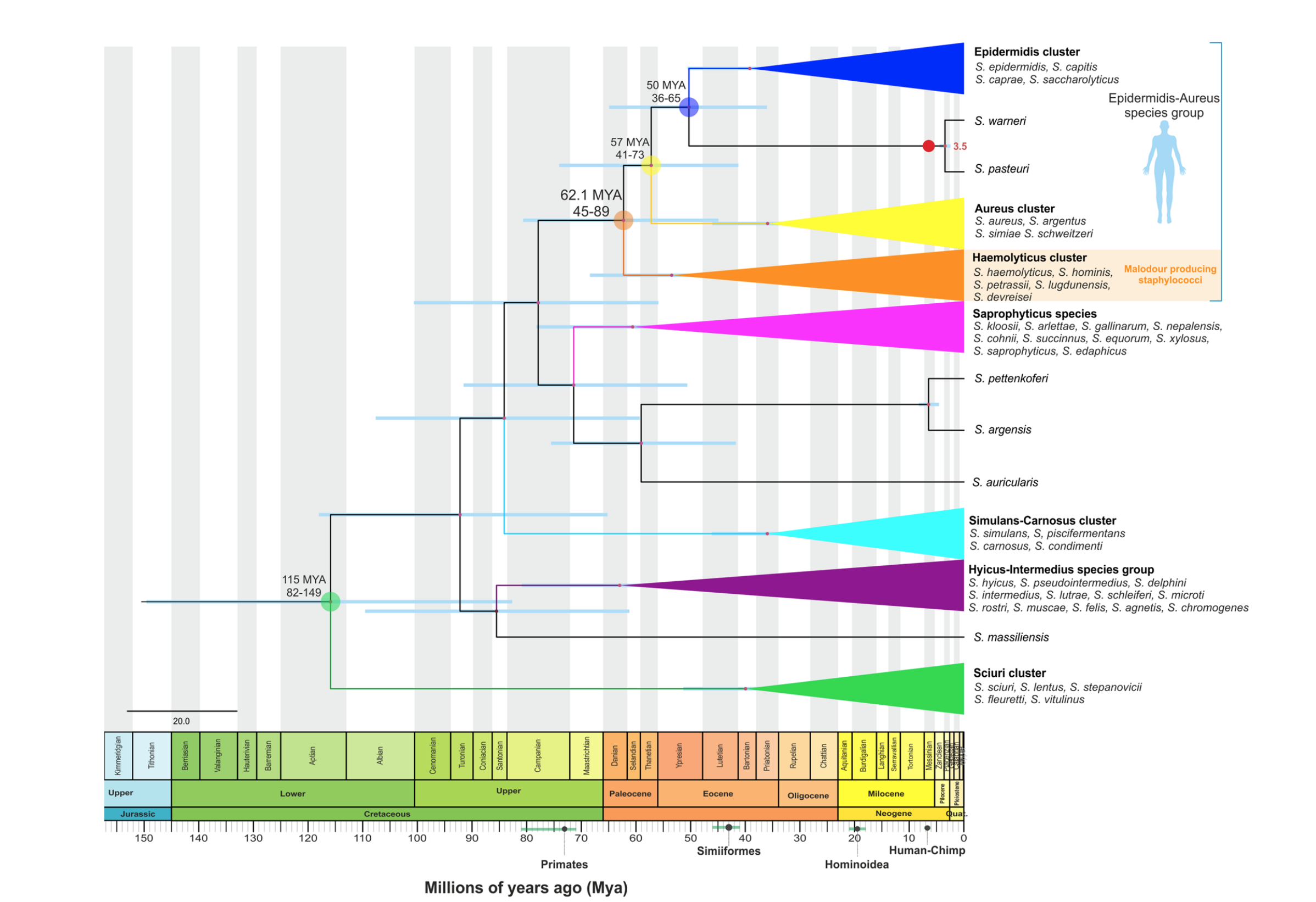 The ancestral acquisition of this enzyme and the subsequent evolution of the specificity for the precursors of thioalcohol implies that the generation of body odor in humans is an ancient process, which happened some sixty million years ago and has been maintained ever since. Since the history of the genus Homo is much later, having emerged some 2 million years ago with Homo erectus, we can say that body odor has been present throughout the entire evolution of human beings. Before we started using deodorants, which is something from the last century, everyone had to have a body odor, which was more or less intense.

This research also has a practical component. The authors think that it can help to design more effective deodorants. These new deodorants and antiperspirants could be much more selective, attacking only the microbes responsible for body odor while leaving the rest of the microbes untouched. This would make their effect much more durable.

Is GABA a link between gut and brain?