A cement is any of various substances used for bonding or setting to a hard material. A popular one, Portland cement, is a mixture of calcium silicates and aluminates made by heating limestone (CaCO3) with clay (that contains aluminosilicates) in a kiln. The product is then ground to a fine powder. When Portland cement is mixed with water, it sets in a few hours and then hardens over a longer period of time due to the formation of hydrated aluminates and silicates.

The hydration process is, thus, so important that some processes have been developed in order to activate cement, i.e., to enhance the early hydration rate. The hydration phase produces C-S-H gel. Cement properties (strength, durability…) will depend on C-S-H gel structure and composition.

In the past decades, many hydration models were proposed for the hydration process of Portland cement. These models favoured either particle reaction kinetics or integrated reaction kinetics, and focused on the dissolution of cement grains, but individual chemical components were not considered explicitly.

Portland cement contains four main components: alite, belite, calcium aluminate and calcium aluminoferrite. Alite (tricalcium silicate) is the major and characteristic mineral phase. The thermodynamics and kinetics of alite hydration has being studied for more than 100 years, still, it is not completely understood.

Some models have been proposed in order to predict the dissolution of alite. Some take the vector approach, with arbitrarily chosen hydration kinetics to calculate the hydration rate and convert the amount of hydration product into a volumetric term; however, thermodynamics and ions transport are not taken into account. Others proposed an analytical model to simulate the dissolution of alite. This model described the etch pit formation on the surface of alite, and calculated the corresponding dissolution rate, but diffusion and chemistry were not considered.

In 2109, Pablo Martin, Hegoi Manzano and Jorge S. Dolado proposed 1 a Kinetic Monte Carlo model (KMC) at the nanoscale, which could simulate the dissolution of crystals not only in dilute solutions but also at close-to-saturated conditions. It simulated all dissolution mechanisms at nano/micro scales. Now, an integrated model is proposed 2 to simulate the dissolution of alite under different hydrodynamic conditions at microscale, combining KMC with the Lattice Boltzmann method (LBM) and the concept of diffusion boundary layer (DBL). 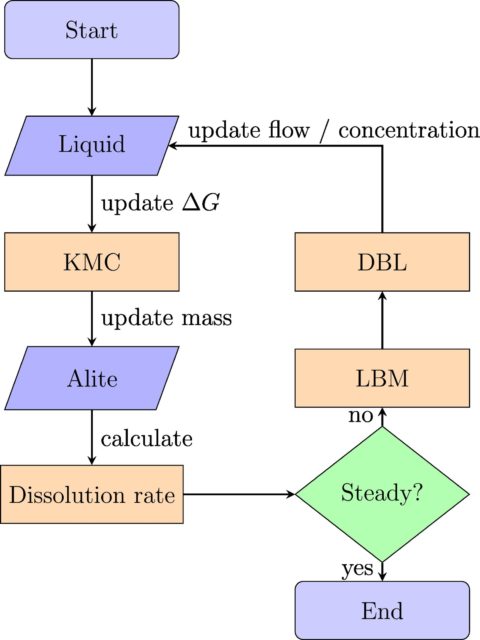 All aspects of the dissolution process are incorporated in the new model. The dissolution of alite itself is modelled with KMC; two multiple-relaxation-time LBM models are used, one to simulate the flow and the other for the transport of ions. The solid-liquid interface is considered using an adapted DBL to calculate the concentration gradient and the dissolution flux. The model is validated with experimental data from literature.

For a complete study on the dissolution of cement particle, it is necessary to involve all of its components individually and simultaneously. This new model for alite provides a good start point for the simulation of the other cement components.

A model for the perfect espresso coffee