If we look back at our past, we are all aware of how much we have changed. The innocence of our childhood, the impulses of our adolescence, the vehemence and passion of our youth, the tranquillity of our mature life: some of us already know what we will be like when we grow up! Hopefully we feel wiser, more balanced, we feel that we take better care of those we love and that we are better people. At the same time, it is fascinating to think that we are the same, that that distant childhood me who ran down the stairs and played with plastic soldiers and this current me, with gray hair and aching bones, are not only the same being, but the same person. My places have changed, the people close to me are others, my habits and activities are different, even most of my cells have disappeared and have been replaced by similar ones, but here I am, essentially the same. I find it shocking and even amusing to think that we tend to believe that the self of now is the definitive one, when everything shows that we will continue evolving, we will continue changing, adding, learning, adding aches and wrinkles, but also throwing new branches and leaves like an old tree. Old, but alive. Harvard psychologist Daniel Gilbert captured this contradiction perfectly: “Human beings are works in progress that mistakenly believe they are finished.” 1. 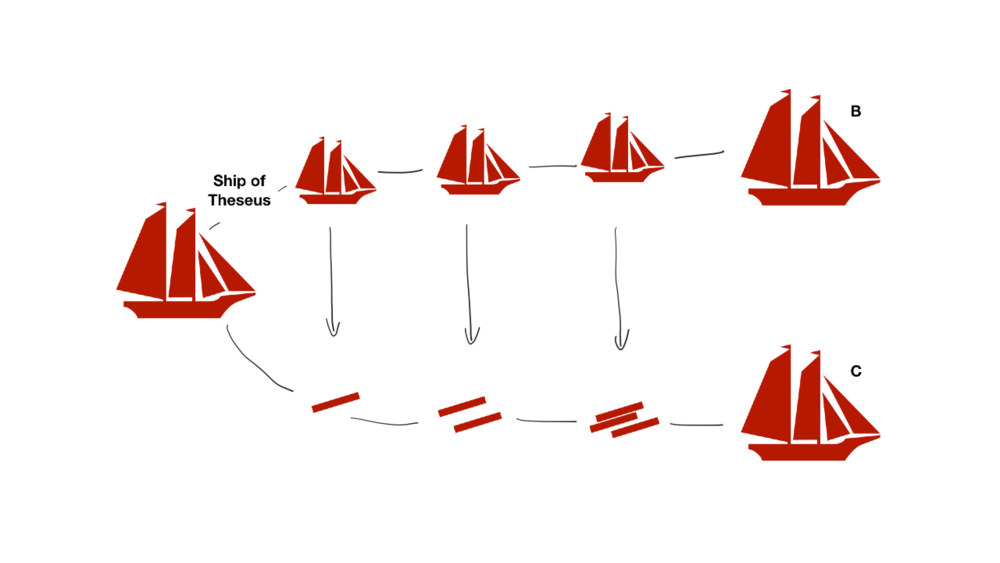 Two millennia before modern psychologists grappled with the problem of continuity in time of the same being, the Greek historian, biographer and essayist Plutarch examined it more lucidly than anyone before or since him. The problem, known as The Ship of Theseus or The Paradox of Theseus, is outlined in his biographical masterpiece Lives. The Ship of Theseus is considered an example of a particular type of experiment, the thought experiment, a hypothetical situation in which a hypothesis, theory or principle is posed in order to reflect on its consequences. Hans Christian Ørsted was the first to use the German term Gedankenexperiment (“thought experiment”) around 1812, which has since been translated into all cultured languages. Much later, Ernst Mach used the term Gedankenexperiment differently, to denote the imaginary development of an experiment that would later be carried out as a real physical experiment by his students. Physical and mental experimentation could then be contrasted: Mach asked his students to give him explanations whenever the results of the real physical experiment differed from those of the earlier imaginary experiment.

Let’s go to the story 2. Theseus is founder of Athens and will be king. Athens was to send a tribute to King Minos of Crete, which consisted of the sacrifice of seven maidens and seven young men, who would be devoured by the monster Minotaur. Theseus voluntarily presented himself in the third shipment to his father so that he would be allowed to be part of the offering and let him accompany the victims in order to face the Minotaur. Theseus departs on his ship and after killing the Minotaur and undergoing various adventures, sails to Athens victorious, back home.

The ship was to be kept seaworthy, since, in exchange for the success of Theseus’ mission, the Athenians undertook to honor Apollo every year thereafter. Thus, the Athenians would send a religious mission to the island of Delphi (one of Apollo’s holiest shrines) in the Athenian state galley – Theseus’ own ship – to pay homage to the god. The ship was anchored in the port of Athens for centuries, during which it had to be repaired many times.

Let us recall the story of the paradox as told by Plutarch himself:

The ship in which Theseus and the young men of Athens returned had thirty oars, and was preserved by the Athenians until the time of Demetrius of Phalerus, for they removed the old planks as they decayed, and put in their place new and stronger timbers, so that this ship became a permanent example among the philosophers for the logical question of growing things; one side held that the ship remained the same, and the other held that it was not the same.

Plutarch himself asks: If the ship in which Theseus sailed has been so repaired and almost all the parts have been replaced, is it still the same ship, and if not, at what point did it cease to be the same ship? Centuries later, the philosopher Thomas Hobbes introduced in his book De Corpore another related question: if the original planks were collected after being replaced and used to build a second ship, which of the two, if either, would be the original ship of Theseus?

Who are you? The person you are today? The person you were ten years ago? Who will you be in fifteen years? And when are you? This week? Today? This hour? This second? And what aspect of you is “you”? Are you your physical body? Your thoughts and feelings? Your actions? Your values? Your memories? Some people consider that our title, occupation, position, and responsibilities lend us identity. Our interpersonal network also changes: we may have different friends in years to come or a different spouse, and our children will grow up and move away. An important part of our identity is derived from our work and career, but they likely will not stay the same, either. On average, a person changes careers 5-7 times in their lifetime and has 11.7 jobs 3.

There are also cultural perspectives. Douglas Adams, radio writer and scriptwriter and famous author of The Hitchhiker’s Guide to the Galaxy recounts this experience in his book Last chance to see 4:

I remember once in Japan, I went to visit Kinkaku-ji in Kyoto and was amazed to see how well the temple had stood the test of time since it was built in the fourteenth century. It was then explained to me, that in reality the building had not stood the test of time, as it had in fact burned to the ground twice during this century. So I asked my Japanese guide

– So it is not the original building?

– On the contrary, of course it is the original, he replied, somewhat surprised by my question.

– And it was rebuilt.

– Of course it was. It’s an important historical building.

– Of course. It had burned down!

– But then, how is it possible that it’s the same building?

According to Noam Chomsky, this paradox arises from extreme externalism: the assumption that what is true in our minds is true in the world. Science repeatedly points out that human intuition, our personal perception and estimates of human beings are often wrong. Cognitive science would treat this thought experiment as the object of an investigation into the workings of the human mind, even though it tells us little about the real world.

From this observation, a significant group of psychology scholars would consider the ship not as a thing, not even as a collection of objectively existing parts (masts, frames, oars…), but as an organizational structure that has a perceptual continuity. When Theseus thinks about his ship, he has expectations about what he can find in each place, how the pieces interact with each other, and how they interact with the world at large, with the sea, with his crew, with those who see the ship approaching Athens. As long as there is a spatio-temporal continuity between this set of relationships, whatever timbers it has, it is the ship of Theseus.

The death of History

You are the success of this song