Nanothreads are one-dimensional nanomaterials composed of a primarily sp3 hydrocarbon backbone, typically formed through the compression of small molecules to high pressures. In 2015, it was found that the slow room-temperature compression of benzene produced crystalline, one-dimensional polymers composed of diamond-like bonds. These diamondoid materials that border nanotubes and polymers are predicted to possess enhanced mechanical, thermal, and chemical stability, making them ideal candidates for a diverse range of applications.

Whereas previous high-pressure reactions of small molecules resulted in amorphous products, the discovery of ordered nanothreads hints at the possibility of rational design principles for the controlled formation of crystalline extended solids at high pressure.

Actually, several design principles have been established to assess the likelihood that a precursor molecule will form ordered nanothreads with minimal atomic displacement. Moreover, nanothreads have been synthesized from a range of precursors. Still, controlling reaction pathways to produce atomically precise materials is a difficult task.

Interestingly, when precursors contain a heteroatom, as in furan (a ring consisting of four CH2 groups an one oxygen atom) or thiophene (a ring of four CH2 groups an one sulphur atom), the nanothreads show enhanced structural order due, in large part, to their localized bonding. If such
predictable reactivity could be generalized to more complex nanothread systems, it would represent a major advancement for controlled solid-state synthesis and enable the a priori prediction of polymerized nanothread structures from their precursor structures alone.

Structure by itself is not enough, though. Chemical stability of the nanothread is equally important. Here is where nitrogen enters the scene, as the azo group,N=N, is very stable, and persists above 20 GPa pressures. Studies indicate that bonds containing nitrogen may be less reactive in comparison to analogous carbon−carbon bonds. Therefore, if nitrogen is incorporated strategically within the precursor with respect to molecular packing, it may be able to direct nanothread formation toward atomically precise chemical products with long-range order. 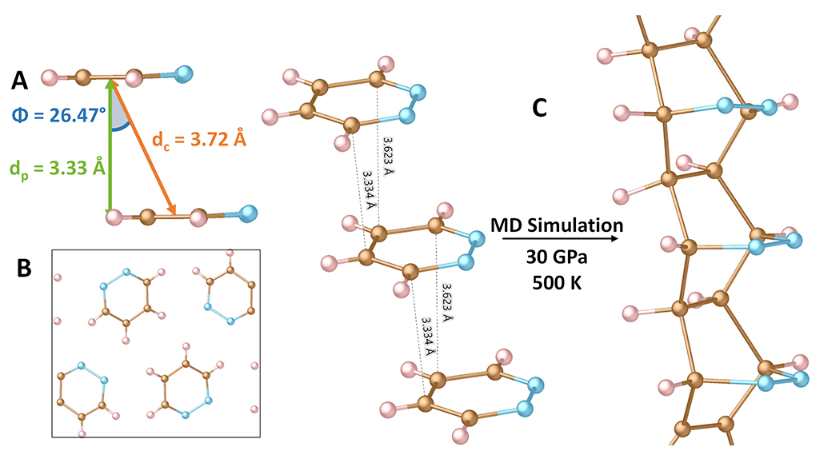 The researchers propose that compressed pyridazine will undergo a nanothread-forming reaction in which the nitrogen atoms serve as a thread-directing group by restricting polymerization to a single, carbon-exclusive [4 + 2] cycloaddition down the stacking axis.

This work indicates that careful heteroatom incorporation can be used to limit the number of potential reaction pathways and obtain highly ordered nanothread products. Further investigation of other heterocyclic ring systems will reveal the utility and scope of this synthetic strategy.