Human activities impact significantly on the environment we live. The human society has been experiencing extreme weather conditions frequently that indicate a systematic climate shift. Almost every place in the world has set records of extreme temperatures. This trend of extreme weather has been warned by scientists to be possibly a result of excessive human activities such as greenhouse gas emissions. It is worth noting that global weather change may lead not only to a hot summer but also, at least partially, to cause disasters such as dreadful hurricane, drought, and flood, etc. The disasters lead to many existing living forms, including humankind, in danger. One of the most significant contributors to environmental damages is hydrofluorocarbon (HFC) gases, which are widely used in residential, commercial and industrial air conditioning and refrigeration (Figure 1). Although HFCs currently represent approximately 1% of total greenhouse gases, the impact on global warming can be hundreds to thousands of times greater than that of CO2 per unit mass. Moreover, production, consumption and emission of these factory-made gases are growing at a rate of 8% per year. The direct emission of HFCs is estimated to account for 45% of equivalent CO2 emission in 2050.1,2 Additionally, the ever demanding uses of air conditioning and refrigeration not only contribute to the greenhouse effect by direct emission but also consumes electricity, which causes CO2 emissions indirectly. The development of zero global warming potential (GWP) and highly energy-efficient refrigeration technologies is therefore an urgent and long-overdue mission. 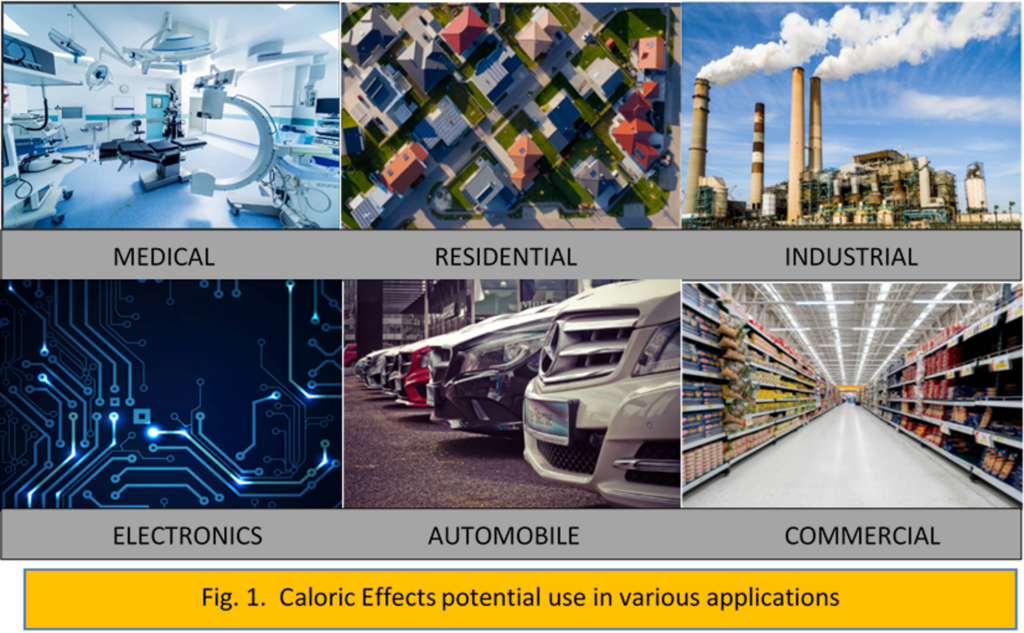 As a self-regulation of human activity, the Kyoto Protocol and its further amendments restrict the uses of the HFCs refrigerants with high GWPs as in the current vapor-compression-cycle (VCC), which inspires a series of innovations of environmental-friendly and non-vapor-compression-based cooling technologies,3 such as thermoelectrics (TE),4 magnetocaloric effect (MCE),5 electrocaloric effect (ECE),6,7 elasto(baro) caloric effect,8 sorption cooling,9 enhanced radiative cooling,10 etc. Magnetocaloric effect has, for several decades, been exploited to pump heat near room temperature. By contrast, their electrocaloric and mechanocaloric counterparts have only been intensively studied and exploited for little more than a decade. These different caloric strands have recently been unified to yield a single field of research that could help combat climate change by generating energy efficient heat pumps for both cooling and heating.

Comparison: Vapour compression refrigerators (VCRs) are operated as reverse cycles (Fig.2. right). They use a circulating liquid refrigerant as a medium. The refrigerant is: (i) adiabatically compressed when P > 0, (ii) condensed at constant pressure undergoing a phase transition (thereby rejecting heat to the heat sink), (iii) adiabatically throttled in an expansion valve (P = 0) and (iv) evaporated at constant pressure undergoing the reverse phase transition (thereby absorbing heat from the load/refrigerator). The amount of transferred heat is determined by the latent heat of the first-order phase transition. Similarly, in solid-state electrocaloric (EC) cooling (Fig.2. left), the adiabatic compression/expansion of the refrigerant is analogous to adiabatic polarization/depolarization, while the isobaric processes are replaced by isofield ones (E). Contrary to VCR, where the adiabatic expansion of the vapour is thermodynamically irreversible, the EC effect is a thermodynamically reversible process that could reach the limit of the Carnot efficiency (the highest efficiency).

Brief History: The first experimental investigations of the electrocaloric effect were made on Rochelle salt in 1930 by Kobenko and Kurtschatov 11. The authors noted the minute electrocaloric change of temperature, but failed to report its magnitude. Only much later in 1963 Wiseman and Kuebler repeated same experiment with much better accuracy12. They reported electrocaloric temperature change of a few mK and provided a simple phenomenological theory demonstrating that the electrocaloric entropy and thus temperature change is proportional to the square of polarization, provided that the initial state is depolarized. In next few decades, ECE was studied in several solid dielectric materials13 as well as in dielectric liquids such as liquid crystals14,15 . In the beginning of the twenty-first century, this field saw revival induced by two papers16,17 predicting the giant electrocaloric response in some inorganic and organic materials 18,19. Specifically, a giant ECE exceeding 12 K was observed in PZT thin films around 222 ◦C 17. A similarly large ECE was detected in the ferroelectric P(VDF–TrFE) copolymer around 70 ◦C and in the relaxor ferroelectric P(VDF–TrFE–CFE) terpolymer near the room temperature18.

An adiabatically applied bias electric field (E > 0) results in an increase in the temperature (+ ΔTad) of a material due to the lattice vibration entropy compensation of the reduction of the dipolar subsystem entropy. In contrast, the adiabatic removal of the field (E = 0) causes cooling of the material; that is, the temperature of the material decreases (- ΔTad) as a result of the decrease of the lattice vibration entropy, which compensates for the increase of the dipolar subsystem entropy. In both cases, the total entropy of the whole system remains constant as it should during the adiabatic process;

Similar to the description mentioned above for the comparison between VCR and ECE, the magnetocaloric effect (MCE) is also a thermodynamically reversible process in magnetic materials with second-order phase transition that shows very high Carnot efficiency. In this case, the adiabatic magnetization/demagnetization process is comparable to that of VCR compression/expansion.

Brief history: There is some discrepancy in the discovery of the magnetocaloric effect. Some authors claim that the magnetocaloric effect was discovered by E. Warburg in 1881, whose studies in iron resulted in a novel thermodynamic phenomenon in those days20. However, other authors claim that it was Pierre Weiss and Auguste Piccard who discovered this effect in 191721, studying temperature changes in pure Nickel induced by magnetic field change around the Curie temperature. In the mid-1920s, the formulation of the MCE and its applicability to reaching temperatures below 1K by adiabatic demagnetization of a paramagnetic compound was proposed independently by William Giauque22 and Peter Debye23, and a few years later it was experimentally demonstrated by W. Giauque and D. P. MacDougall by means of the implementation of the first adiabatic refrigerator24. Their research was focused on studying the influence of the demagnetization of a MC material on the adiabatic temperature change, reaching values of up to 0.25 K by reducing the magnetic field from 0.8 to 0 T and starting from 1.5 K. This milestone marks the beginning of the ultra-low-temperature cryogenic technology, which today is used to reach micro-Kelvin temperatures by nuclear adiabatic demagnetization. Currently, the biggest challenge of the solid-state adiabatic refrigeration is the implementation of this technology in devices operating at room temperature for household and industrial purposes. The first prototype of a magnetic refrigerator was designed in 1976 by Gerald Brown25. Currently, the most developed prototypes have been developed by Ubiblue, a French start-up company specialized in the design and production of devices based on the magnetocaloric effect26, offering devices with several tens of kW of cooling power, allowing energy saving of 50% and working with a Carnot cycle efficiency of 65%.

In general, the mechanocaloric effects of solid-state physics involve both barocaloric and elastocaloric phenomena of matter. The difference between the two effects is determined by their response to an external mechanical stimulus, classifying these effects as isothermal entropy or adiabatic temperature changes induced by isostatic pressure (σ < 0), in the case of barocalorics, or by uniaxial stress (σ > 0), in the case of elastocalorics. For the sake of simplicity, we will discuss both materials simultaneously in this section.

Brief history: Surely, many of us have had the experience of feeling the temperature increase of a rubber band when stretching it against our lips. Well, precisely this experience was reported by the English natural and experimental philosopher John Gough in 180227, establishing this study as the discovery of the elastocaloric effect (eCE). In fact, it was not until the 1850s that a thermodynamic formulation explaining this effect was proposed, first by W. Thomson28 and a couple of years later by James P. Joule29, who reported evidence of this effect in several solids. In fact, due to these published works, the name Gough-Joule effect was given to the above physical phenomenon, which was first defined as the tendency of elastomers to shrink when heated under tension and subsequently generalized as the dependence of the temperature of any solid on the mechanical deformation. However, there was no significant interest in studying these materials due to the low elastocaloric properties of these compounds for over a hundred years. Until, based on several results obtained on shape memory alloys30, they pushed again this effect as a viable alternative for their implementation in solid-state cooling systems. Since then, the number of scientific papers based on the elastocaloric effect has been increasing considerably. Recently, plastic crystals (such as Neopentylglycol or tris(hydroxymethyl)aminomethane) have shown colossal barocaloric effect (BCE) (acts with isostatic pressure as external stimulus instead of uniaxial stress), that is elevated adiabatic temperature changes due to a change in the material by pressure31.

Working Principle: The phenomenology of the mechanocaloric effect is the one most closely related to the existing technology in refrigeration by compression/expansion of a gas (Fig. 2 Right) but acting in a crystal lattice. The barocaloric refrigeration cycle consist in four differentiated steps, i) the adiabatic compression that is when the barocaloric material is subjected to an isostatic compression (σ < 0), ii) the heat transfer from the cold to the hot heat exchanger, iii) the decompression process where the barocaloric material is relieved (σ = 0) and iv) the heat transfer from the hot to the cold heat exchanger/refrigerator. In the case of elastocaloric materials the caloric effect stems from the release and absorption of latent heat by elastic deformations (σ > 0) (instead of isostatic compression, σ < 0) of the active material by cyclic loading and unloading.

In general, the conditions to find the most suitable caloric materials for next generation refrigeration technologies are:

• The detection of a pronounced caloric effect at room temperature, under relatively small intensities of the external stimulus;

• To be toxic-free and chemically stable;

• The resistance to corrosion (by the heat transfer fluid or by the contact with other materials);

• The easiness to be reproduced (in terms of the number of composing elements, the compatibility with large-scale production);

• To present little values of specific heat to enhance the adiabatic temperature changes as well as a rapid response, in terms of caloric effect, to the external stimulus variations.

Next generation refrigeration technologies based on advanced materials also represent a needed contribution for a sustainable future!