If we are asked what a metal is, most likely we would think almost automatically in those elements that we see as lustrous solids, good conductors of heat and electricity, that tend to form positive ions, and with a particular chemical bond that keep metal atoms in place, the metallic bond. And all of this is correct, even though we would be reminded that not all metals are solids at room temperature, as mercury proves.

However, there is a characteristic of some metals that is seldom mentioned: transition metals – with unfilled d-orbitals, like iron, copper, or gold – form complexes, some of them fundamental for life. A complex is a compound in which a molecule (ligand) forms coordinate bonds to a metal atom (or ion). The interesting thing is that complexes allow the formation of a metal-metal bond, not a metallic one – where atoms are considered to be ionized, with the positive ions occupying lattice positions, and electrons are a gas – but a covalent one. Metal-metal bonding interactions can engender outstanding magnetic properties in bulk materials and molecules, and examples abound for the transition metals.

Metal-metal bonding necessarily requires diffuse valence orbitals, and thus nearly all molecular examples involve transition metals with diffuse d orbitals. In some transition metals, like lanthanides, where 4f orbitals are filled along the series, the f-electrons do not penetrate to the outer part of the atom. This limited radial extension of the lanthanide valence 4f orbitals has thus far precluded the isolation of a coordination compound featuring a lanthanide-lanthanide bond.

To find a feasible compound with a lanthanide-lanthanide bond is important both from the basic-science point of view and for its applications. These stem from the access such a compound could enable to favourable electronic and magnetic properties, given the large magnetic moments and single-ion magnetic anisotropies of the 4f elements. 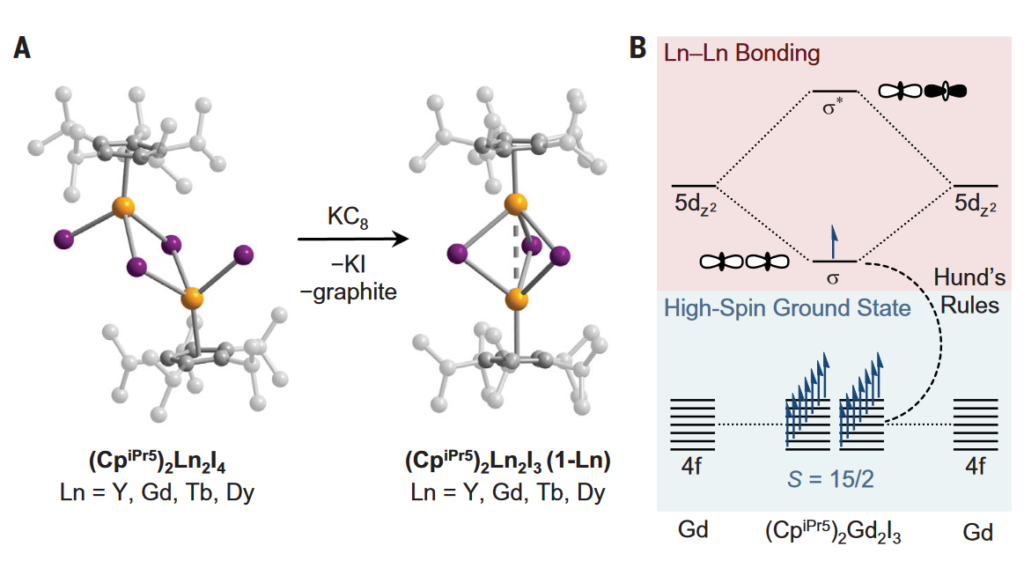 Now, a team of researchers reports in Science 1 the synthesis of mixed-valence dilanthanide complexes with the structure (ligand)2Ln2I3, where Ln is Y, Gd, Tb, or Dy; and ligand, pentaisopropylcyclopentadienyl.

The complexes, obtained by the reduction of trivalent precursors, show, as determined by structural, spectroscopic, and computational analyses, a single electron bond between the metals. Importantly, this equally shared d electron by the two lanthanide centres enforces the alignment of the other valence electrons.

The resultant coercive fields exceed 14 tesla below 50 and 60 kelvin for the terbium and dysprosium compounds, respectively. That is an enormous coercive magnetic field at liquid nitrogen temperatures that surpass even commercial magnets. Just imagine the possibilities: designing extended solids in which such lanthanide-lanthanide bonded units are coupled through exchange interactions to create the next-generation of powerful permanent magnets.