It is not risky at all to assert that fundamental physics has not been in good shape in the last forty years or so, not because of lack of work, talent, conjectures and resources, but because few really big advances (as big as, say, the discovery of thermodynamics, of relativity, of quantum field theory, or of the standard model) have been proved to be as right and as powerful as those immense advances of the preceding century were. This dismal situation has been colourfully depicted in a book we reviewed here not so long ago. One of the tribes attempting to push theoretical fundamental physics out from this lethargic state (lethargic in terms of new empirical discoveries) is vividly described in another, more recent book, also authored by a female scientist: Chiara Marletto’s The Science of Can and Can’t: A Physicist’s Journey Through the Land of Counterfactuals 1, that offers to non-specialist readers an eminently comprehensible account of the view according to which fundamental physics needs a total reconsideration of its principles and methods, in the line of the theories that assume a profound connection between physical ‘stuff’ (matter, energy, fields…) and information. This type of approach has been championed by physicists like the pioneer of quantum computation David Deutsch (who has prefaced the book, and of whom Marletto is a former student and current collaborator), or like Archibald Wheeler (creator of the “it form bit” hypotheses, who strangely is not cited nor even once by Marletto).

There is a lot of interesting things in the book (mainly, its bright and clear explanation of basic ideas about information as embodied in physical systems, both ‘classical’ and ‘quantum’ ones, and the connections and conflicts between classical and quantum information), but let me concentrate on a few things I consider quite objectionable in Marletto’s arguments. To begin with, the author commits one of the most commons and contemptible mistakes in defending one’s theory: that of misrepresenting and caricaturizing the views one is trying to criticize. It seems like if Marletto gets carried away by the enthusiasm in her own ideas, so that she has come to believe that these are much more original than they really are (whereas the truth is that some of them are rather platitudinous), and that the practice of physics till now has been too much guilty of the mistakes she is criticizing. In particular, Marletto tries to convince you that physics is almost totally dependent on a fundamentally flawed framework of explanation, which she calls ‘explanation by dynamical laws’:

An unspoken stipulation was made –what I shall call the traditional conception of fundamental physics– that all fundamental physical theories must be formulated in terms of predictions about what happens in the universe, given the initial or supplementary conditions and laws of motion (…) The ultimate theory about physical reality would consist of a collection of the trajectories of all elementary particles in the universe, given where and when they started.

And a little bit later:

The traditional conception of physics cannot possibly capture counterfactual properties, because it insists on expressing everything in terms of predictions about what happens in the universe given the initial conditions and the laws of motions only –i.e., in terms of trajectories of apples or electrons, forgetting the other levels of explanation.

Frankly, I do not recognize most of historical physics in this description, nor do I guess that most readers familiar with the discipline will. I think it contains several important misconceptions. In the first place, most physical explanations were not at all about ‘predictions of actual trajectories’, even if, obviously, such predictions were important to test the explanations and for many other practical purposes. Except of some attempts to fit the orbit of the moon and a fistful of anecdotic examples, a work like Newton’s Principia mathematica didn’t contain anything like ‘predictions of actual trajectories’: rather on the contrary, it was devoted to explain laws (like Kepler’s orbital laws, or Galilei’s law of free fall), laws that established which trajectories are physically possible and which ones are impossible, or more simply, how a body would move under changing assumptions about the forces applied to it, the resistance of the medium, etc. A wonderful example is found in the famous argument with which Newton shows that a projectile thrown away horizontally from the top of a mountain with enough speed would became an ‘artificial satellite’ of the Earth. Artificial satellites (an expression Newton himself didn’t employ, of course) are the closest we can conceive to something that in the times of Newton were absolutely counterfactual. Hence, the claim that traditional physics was ‘bound’ to a method of explanation that only took into account the ‘actual’ behaviour of ‘actual’ trajectories cannot be further from the truth. If this example is not enough to prove it, I invite readers to consider the crucial role that thought experiments have played in the history of physics, from Galilei’s imagining two bodies with different weight, density or shape falling in a vacuum, to Einstein’s pursuing a photon at the speed of light. So, traditional physics has been about ‘of can and can’t’ through and through since the beginning. 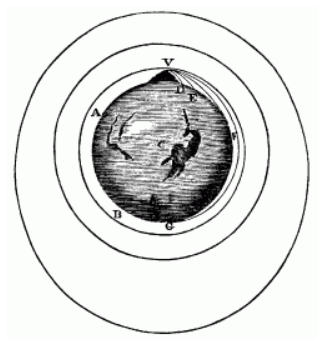 A second problem with Marletto’s views is in her mention of ‘initial conditions’. Of course, predictions need to assume, (or better still, measure) the initial state of the system whose trajectory we want to predict, but this is not so with most theoretical explanations. Again with the case of Newton (who seems to be the original perpetrator of the sins Marletto denounces), when he explained why a planetary system obeying the law of gravity as well as the other laws of classical mechanics should produce orbits that were elliptical, he didn’t need to assume anything like a ‘historical’ hypothesis about the origin of the solar system, i.e, its ‘initial’ conditions. Explanation in physics consists mostly of showing that some laws follow from the combination of more basic laws and specific constraints (that range from the most empirical to the most abstract and theoretical, like when Christian Huygens proved on the basis of symmetry considerations alone the law of conservation of kinetic energy). Marletto seems to be obsessed with the ‘problem’ that ‘traditional’ physics could only explain the actual state of the universe by knowing with precision its state right during the Big Bang, or something like that. But this is, if at all, just an infinitesimal part of the relevant corpus of research in contemporary physics, if not just a figment of Marletto’s narrative. One even wonders how the new physics of counterfactuals advocated by her could explain some features of the actual history of the universe without making some assumptions and measurements not derivable from mere abstract principles, or how it could avoid the logical problem that we cannot have something like a ultimate explanation of why the world is the way it is (why it follows the fundamental laws it follows, or why it obeys the fundamental ‘principles of counterfactuals’ it obeys).

Another aspect of ‘the traditional way of doing physics’ that Marletto criticizes is its alleged dependence on ‘reductionist’ explanations, and its correlative lack of capacity of understanding the ‘emergence’ of other ontological levels beyond the ‘basic’ one, but I will not discuss this because she does not even elaborate a detailed argument about these questions. I will simply say that it is not clear to me how a physics built out of ‘abstract principles about possibilities and impossibilities’, instead as out of ‘laws of movement’, symmetries, conservation principles, etc., might offer an easier solution to problems like, say, how living things manage to behave as they do thanks to the way their atoms are organised.

One final shortcoming of the book I want to briefly comment is related to a rather different question: Marletto’s (and Deutsch’s) idea that a physical theory based on information principles might offer a conception of knowledge (as ‘information that is capable of perpetuating its own existence’) that supersedes some (never specified) ‘anthropocentric’ visions of knowledge. I recognise that some interesting results might be derived from this definition of knowledge, but as a philosopher, I feel very curious to see which specific theories about knowledge Marletto was thinking about (Plato’s? Descartes’? Kant’s? Carnap’s? Foucault’s?), or which specific scientists have argued that ‘knowledge cannot be an object of scientific study’, and, most importantly, what specific problems about knowledge (either philosophical, psychological, ‘scientific’, engineering, or historical ones) is this imaginary ‘counterfactual theory of knowledge’ supposed to solve better than other theories. Marletto’s absolute silence about exactly who is she arguing against doesn’t make her approach very tempting for now, I fear.

I also have profound doubts, moreover, about the mere existence on any deep and relevant connection between information (of which ‘knowledge’ would be a species) and the existence of counterfactuals (facts about what is possible, impossible or necessary, and not about what actually occurs), a premise on which all the arguments of Marletto seem to depend. In a trivial way we may accept the claim that, in order to be ‘information’ (or perhaps ‘to count as’ information) something must have the `possibility’ of being in at least two different states, but I do not see why it should be necessary to accept that this ‘possibility’ refers to some kind of fundamental indeterminacy in each entity that, say, ‘can be in state 0 or state 1’, rather than referring to the ontologically less problematic claim that within the population of relevant entities, some are sometimes in state 0 and some are sometimes in state 1. The existence of information (or that entities or states that count, or are used as information by other entities) is even compatible with the physical world being totally deterministic (so that, at the most fundamental level, there are nothing like ‘possibilities’ other than the facts that actually happen): for example, in a deterministic world, living beings may emerge like those trees that ‘decide’ when to bloom on the basis of how the duration of the sun light hours varies at the end of the winter. How many time passes from the sunrise to the sunset is paradigmatically the example of ‘one system that can be in different states’, and hence the duration of the sun light is information that plants can use, but obviously each particular day is not ‘an entity that can be in one state of duration-of-sun-light or in another’, for the rotation of the planet is a process which is absolutely deterministic, and so each day can only be in the state that the physical laws of movement determined it had to be, given how the planet was moving until then. We might use counterfactual statements like ‘if the sunlight today had been a 10% less than it has been, the tree would had not bloomed’, and the use of this type of statements can be rational and useful in many contexts; but this does not require us to assume that in nature there are something like counterfactual states, that respond to our grammar of counterfactual sentences. The science of counterfactuals will probably remain a mere counterfactual science.