It is well known that an accurate and energetic laser shot can melt, ionize and excite the material in which the light is focused, creating very bright plasmas after the interaction. Valuable information can be obtained from the light emitted by the plasma, such as the elemental composition of the material itself or the environment characteristics. Specifically, the technique that uses the optical emission characterization of the laser-induced plasma is known as Laser Induced Breakdown Spectroscopy or just LIBS. It has been widely applied not only to solid material analysis but also to liquids and powder samples onto the Earth surface but, nowadays, the technique is expanding its horizons to the ‘red planet’. 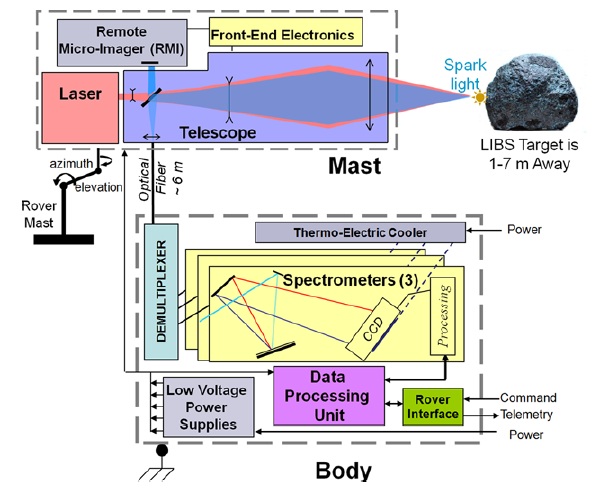 NASA’s rover Curiosity landed on the Martian crater known as Gale in August 2012 with several instruments to accomplish an exploratory mission, including a LIBS set up called “ChemCam” (Chemical & Camera). The instrument had been set up as simple as the laboratory ones and it mainly consists in 2 sections: a mast section, that includes the laser, its associated electronics and the light collection system, and a separate body to analyze the light acquired. A schematic overview is represented in the image 1 1 2

The Chemcam uses a Q-switched Nd:KGW laser (solid state laser in which the gain medium is Neodymium doped Potassium Gadolinium Tungstate) carefully designed to achieve 1 GW/cm2 and a Gaussian beam shape that reach energies higher than 15 mJ in 5 ns shots with a repetition rate up to 10 Hz. It had been constructed to resist a wide range of temperatures (from -30o to +30o C) and to sustain around 2 million of shots. The target material could be up to 7 m away from the mast and the energy that reaches the sample is about the 50% of the primarily emitted light. This is because the telescope included, needed for the expansion of the laser beam, focusing onto a distant sample surface and afterwards collection of the light emitted. As can be seen in figure 2 the expansion of the laser beam is performed by a Galilean expander (doublet of divergent and convergent fused silica lenses) and a Cassegrain telescope (three mirrors positioned as the schematic view in the figure). The laser beam is then ejected by the R-WEB window in the figure 2 to finally find the target. Once the plasma is created on the Martial sample the light emitted is collected as represented in figure 3, guiding the light to a fiber optic.

The approximately 6-meter long fiber optic is connected to the body unit allowing full-range mobility for the rover mast. Once in the body unit, the light is divided in three wavelength ranges by a demultiplexer, and derived to the corresponding spectrometer. Thus, the Chemcam is provided with three different spectrometers that allow the analysis of light from 240 nm to 832 nm (i.e. from UV to NIR). The fiber optic is fed into a 13 µm width slit connected to the proper spectrometer and the three of them use crossed Czerny-Turner configuration with a focal length of 102 mm and a final CCD as a detector.

One of the most important issues in the analysis from laser induced plasmas on the Earth is the need of time-gated detectors. The laser induced plasma evolves with time and so does the emission signal. At the very beginning (first microseconds) the continuum emission due to breemstralung domains the spectrum so the proper acquisition should occur at longer times, which implies the synchronization of the laser shot and the detector gate; contrary, the Martial atmosphere has a very low continuum emission that reduces the background issue.

The complexity of the instrument and the huge technological (and economical) effort performed to carry out the Curiosity mission, contrasts with the simplicity of the results obtained. As can be seen in the figure 4, the combination of the spectra recorded by the three spectrometers achieves a very nice peak pattern where different elements can be easily distinguished. It should be highlighted that the peaks’ heights are not directly related to the abundance of the element on the sample, due to the different excitation yield of each emission line. It is observed the presence of carbon, which comes from the carbon dioxide at Mars’ atmosphere, amongst other elements typical from volcanic rocks. After the analysis of the whole spectrum the sample is believed to be basalt. The plot was sent back to the Earth in August 19th 2012 and was obtained after 30 laser shots at a single 0.4 mm diameter spot on the first Curiosity target, a rock called Coronation 3.

Advances on an Erdős problem on convex boundaries