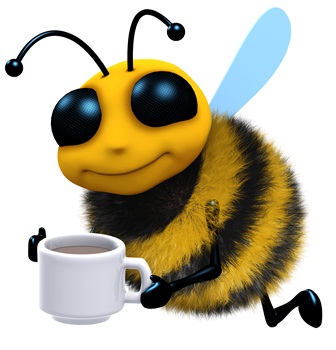 As the Hungarian mathematician Alfréd Rényi famously put it (although usually misattributed to Paul Erdös), mathematicians are devices for turning coffee into theorems. Other people drink coffee for a variety of reasons, and considering that coffee is very far from being the only popular beverage containing caffeine, it is not difficult to believe that caffeine is one of the most consumed drugs in the world.

The scientific consensus is that caffeine and other drugs are produced by plants as a defense against herbivores. However, the production of a very low concentration of caffeine in the nectar of certain plants such as lemon, pomelo and grapefruit trees do not seem to agree well with this explanation. Geraldine Wright and her colleagues of Newcastle University, University of Dundee and Arizona State University found small concentrations of caffeine in the nectar of four species of Citrus and three species of Coffea. In a recent article 1 they explore the possible ecological function and concluded that pollinators, like human mathematicians do, might get a boost in memory formation from caffeine.

The researchers found that honeybees have cells in their mouth parts that are sensitive to the flavour of caffeine. The bees reject solutions with concentrations of caffeine higher than 1mM but, when presented with the smaller concentrations normally present in the nectar of Citrus and Coffea, bees happily take a sip (Figure 2). When comparing the effect of different small concentrations of caffeine in learning, the researchers found that it hardly affected the learning process. However, there was a surprisingly big effect in long term memory: bees trained with a solution of sugar and caffeine were almost three times as likely to remember the scent than bees trained with a similarly sweet but decaff solution (Figure 3).

In mammals, the neurological effect of caffeine is to prevent the neurotrasmitter adenosine to bind to certain receptors. In particular, caffeine blocking of adenosine produces long-term activation in certain areas of the hippocampus involved in memory formation. In collaboration with Dr Mary Palmer at the University of Dundee, the researchers explored the effect of caffeine in cells of the mushroom body (a structure in the insect brain that plays a role in olfactory memory and learning) and they discovered that small concentrations of caffeine produced a depolarization of the membrane of Kenyon cells. This depolarization also appeared when putting a solution of DPCPX, another adenosine antagonist, so it is likely that caffeine acts in the mushroom body in the same way as in the mammalian hippocampus: blocking adenosine receptors. The depolarization of Kenyon cells in the mushroom body is likely to lead to an increase of excitability, which may facilitate memory formation.

While still acting as a repellent at high doses, such as the ones found in coffee beans, this study shows that flowers could in fact be producing low doses of caffeine to secretly drug pollinators and modify their behaviour. This newly discovered advance in the arms race of plants would make it easier for bees to associate a determinate species of flower with reward, making it more likely that the same bee will visit the same species in the future and thus improving the chances of pollination. And this is maybe not theorem production, but still a very important ecological function.

A model for the perfect espresso coffee