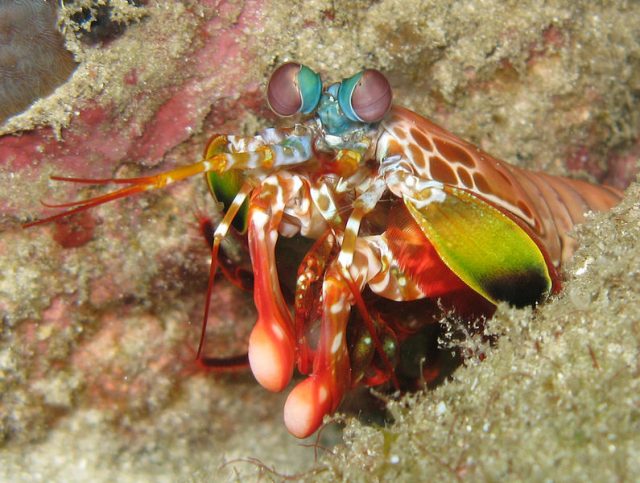 If we were to ask a bunch of science geeks about their favourite animals, I have no doubt that the mantis shrimps would top many rankings. The mantis shrimps (or stomatopods) are an order of marine crustaceans, typically inhabiting the colourful coral reefs in tropical or subtropical seas. They are neither shrimp nor mantis, although arguably they look a bit like big shrimps (up to 40 cm long) with a mantis-like strategy for hunting.

Some mantis shrimps (termed ‘spearers’) use spikes on their frontal limbs (called raptorial appendages) to impale soft bodied victims. Others (called ‘smashers’) prefer to crush hard-crusted prey with strikes from a pair of hardened dactyl clubs. Those strikes are extraordinary powerful, and on occasions they have been reported to break aquarium glasses. The biologist and archaeologist Frederick Corbin Lukis described in 1835 his encounter with a captive mantis shrimp (quote taken from 1):

“The prominent appearance of the eyes, their brilliancy and attentive watching, the feeling power of the long antennae, evinced quick apprehension and instinct. I brought a silver teaspoon near them, which was struck out of my hand with a suddenness and force comparable to an electric shock: this blow was effected by the large arms, which were closed and projected in an instant with the quickness of lightning.”

The colourful peacock mantis shrimp (Odontodactylus scyllarus) brings that strategy to an extreme. The dactyl club of this smasher accelerates 10,400 times the acceleration of gravity and can reach a final speed of up to 83 km·h-1 2. This is double that of the peak speed of strike of a professional boxer, but the mantis shrimps achieve this under the water. To reach those speeds, that would require the use of more power than any reasonable sized muscle could produce, all mantis shrimps adopt a technique not unlike that used by a catapult or a crossbow (see Fig 1). Two large slowly contracting muscles store energy in elastic structures, while another muscles engage a pair of latches that prevent that energy from being released 34. Once an unsuspecting prey is in range, the latches open and the stored energy is released, extending the raptorial appendage towards the prey. The attack lasts just a few milliseconds and is often fatal.

High speed video images reveal that the strike of the smasher mantis shrimps is so powerful that vapour bubbles form due to the lowering of local water pressure, a process called cavitation [1]. These bubbles collapse after about half a millisecond with a bang, and may stun or further damage the prey whether it has survived the 1000N impact of the blow or it has managed to dodge it. To be able to resist the enormous forces involved in the attack, the dactyl clubs of smashing mantis shrimps are made out of a very resistant composite material, which engineers now study to understand its extraordinary mechanical properties [4].

They discovered a surprisingly complex structure (see figure 2). The impact surface is hard but potentially brittle, composed mainly by the mineral hydroxyapathite, with an exceptional degree of crystallisation. Under this lies a periodic structure of more amorphous mineral phases, embedded in sheets made out of chitin, an organic polymer found in the exoskeleton of arthropods. Each chitin sheet is skewed a small angle with respect to the one over it, forming a helicoidal structure. A band-like structure with parallel chitin fibres (the striate region) reduces deformations of the club. Computer simulations show that cracks tend to appear in the transition between the crystalline impact surface and the periodic structure. However, the underlying chitin helicoidal structure in the periodic region prevents those cracks from propagating and developing into a catastrophic failure.

Those Mike Tysons of the seas need fast and reliable sensors to detect a target for their high-tech armour-piercing hammers. In the following article, I will write about their eyes and their unique structure to detect colour and light polarisation.