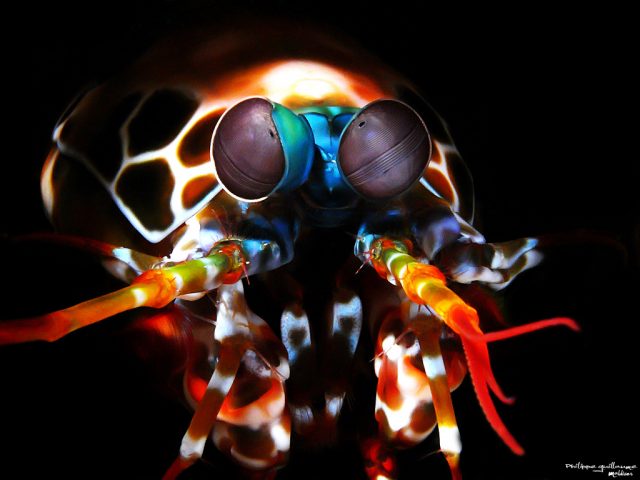 In a previous article I wrote about the high speed attacks of the mantis shrimps. However, my favourite feature of these crustaceans is their unique eyes. They have two apposition compound eyes, typical of many diurnal insects and crustaceans but unusual in how freely they can move on their stalks. The eye forms an image by combining the signal detected by all the independent structures (ommatidia, with a lens and small set of photoreceptors) sampling one point of the space each.

However, the mantis shrimp eyes are different from other apposition eyes in having a horizontal band of ommatidia with enlarged lenses across the eye. The two parts of the eye outside the band have overlapping fields of view, thus potentially being able to judge distances, and detect only grey-scale details of the world. In most species of mantis shrimp, the band itself is formed by six rows of ommatidia, with each column of six looking in the same direction. The mantis shrimp uses this band to scan the image for colour and light polarisation details. Two rows contain four types of polarisation sensitive photoreceptors in total, forming a system not only able to analyse linearly polarised light as bees and other animals do but also circularly polarised light. The other four rows contain up to 12 different colour sensitive photoreceptors. Each one detects light of a narrow band of wavelengths, in the “visible” spectrum but also in the ultraviolet, beyond what the naked human eye can see.

It is important to stress how unusual this configuration is. Having more types of colour sensitive photoreceptors could theoretically improve colour discrimination, but will do it necessarily at the cost of a decrease in image resolution, as the image will be sampled by fewer photoreceptors of the same type. In fact, humans use only three different photoreceptors for colour vision, while birds and reptiles get along with a maximum of four. Having eight colour channels is not unheard of in butterflies, but why do mantis shrimps need 12? In a recent paper 1, Hanne H. Thoen and her colleagues in Australia and Taiwan set out to solve this mystery.

They used food rewards to train mantis shrimps to tap or grab optic fibers emitting light of certain colours, and then tested the ability of the mantis shrimp to differentiate that light from a test light. A mantis shrimp trained, for example, to choose a lightguide emitting a particular green light does not have any problem to differentiate it from, say, a lightguide emitting red light. However, it will have difficulties differentiating it from a lightguide emitting a different shade of green. If the shades of green are very similar, the animal will start to choose randomly between them, with a success rate of 50%. The maximum distance in wavelength between two colours that elicit such a random response quantifies how well the animal can differentiate two colours around that precise wavelength. The results show that, despite its impressive panoply of different photoreceptors, the mantis shrimp colour discrimination was much worse than that of a human at any point of the spectrum.

We are not sure about how exactly it is implemented, but we suspect that all animals process the signals antagonistically from pairs or groups of different photoreceptors tuned to different wavelengths. This process is called colour opponency and allows to obtain information about colour that is independent of luminosity. However, a theoretical model based on the assumption that colour is processed by opponency between pairs of photoreceptors predicts that the mantis shrimp colour vision should have a performance almost 10 times better than the one measured by Thoen and her colleagues. What if the mantis shrimp is not using colour opponency after all?

If this is true, the mantis shrimp may be using its 12 colour channels to recognise colour without using any complex processing. They would be sacrificing colour discrimination by skipping some neuronal processing, thus decreasing energy costs and increasing reaction speeds. When you are an animal that depends on colour and polarisation to tell mate from prey, and that can kill with a single strike in a few milliseconds, it pays to have a visual system that works even faster than that.

The true colour of chlorophylls

A new type of arthropod-inspired cameras