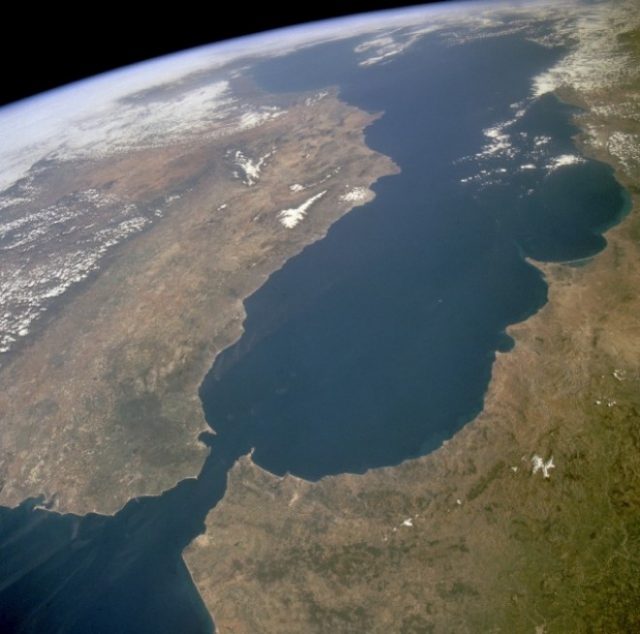 Let me tell you a story about serendipity in research, a story that involves the evolution of Earth’s landscape and floods of unprecedented scale. This is related to research of our own group here at CSIC 1.

Classical authors such as Aristotle, Galileo, or Leonardo da Vinci, used to describe the birth of the Mediterranean Sea as an enormous flood through the Strait of Gibraltar that filled a desiccated basin. All such stories can be traced back to the 3rd volume of the oldest known encyclopedia: Historia Naturalis (1st century AD). There Plinius the Elder recounted a legend from southern Hispania that attributed the formation of the Strait of Gibraltar to Hercules the god, who “allowed the entrance of the ocean where it was before excluded“. Amazingly enough, the geophysical and geological research carried out in the last decades seems to support this ancient vision about the origins of the Mediterranean Sea.

Since the identification of the Messinian age by Austrian naturalist Karl Mayer (late nineteenth century) we know that the marine connections between the Mediterranean Sea and the Atlantic Ocean became small by the end of the Miocene. Modern chronostratigraphy has dated this at 6 million years ago, the time when our earliest ancestors started walking on two legs in Central Africa. As a result, the Mediterranean became a huge salt pan that accumulated about 10% of the salt dissolved in the world’s oceans, during the so-called Messinian salinity crisis. The ongoing tectonic uplift of the Gibraltar Arc region finally emerged the last Atlantic seaway and isolated completely the Mediterranean from the ocean, about 5.6 million years ago. The Mediterranean then became largely evaporated as a result of the dry climate of its watershed. Finally, about 5.3 million years ago the Mediterranean was refilled from the Atlantic through the Strait of Gibraltar. The indications that this occurred geologically very fast (namely, the abrupt change from Miocene to Pliocene sedimentary layers) made this event be known as theZanclean flood.

The flood along the Gibraltar threshold may have been caused by its subsidence below the Atlantic level, or by faulting, or by erosion (or a combination of these three proposed mechanisms). But beyond the causes for the flood, another key unknown is the nature, abruptness and evolution of the flood itself: From the sharp transition in the sedimentary layer record, it is widely thought (though not unanimously) that the event was very fast. But in geology fast can mean a hundred thousand years. Because little was known about its dynamics, and perhaps because for geologists rapid major events are rare and challenge the principle of uniformitarianism, the flood duration underwent a wide range of estimations from tens to tens of thousands of years.

Simulation of the refill through the strait of Gibraltar by Steven N. Ward. Note the water velocity distribution around 1:27.

Before knowing anything about the Messinian Mediterranean, I used to model the evolution of landscape over geological time scales. I was particularly interested on the role of lakes in controlling the long-term evolution of topography of large continental regions.

Lakes are those water bodies collecting precipitation in local topographic minima. Lakes are usually ephemeral over geologic timescales: Unless there is a tectonic process enlarging that topographic basin, they soon fill up with sediment, overspilling their banks. When the water finds a way out, it incises along the outlet, drawing the lake’s level down, and propagating this erosion upstream into the lake. In our landscape evolution models this transition was systematically very fast, but this result was not convincing enough for two reasons: First, lake data to compare with were scarce, and we were in the need of a large case scenario where traces of erosion were more evident. Secondly, our models where not accounting for transitory water flow, but instead it was calculating a steady flow (i.e., the water precipitation equals the water losses through evaporation at each time step of the simulation).

Then I accidentally learned about the Messinian salinity crisis, about its impact in the Mediterranean evolution, and about the megaflood hypothesis for its ending. It struck me that the feedback between water flow and incision we envisaged for lakes should be similar during the Zanclean flood, seeing the global ocean as a huge lake on the verge of overtopping towards the dry Mediterranean. Combining the formulation of river incision with the proper hydrodynamic equations, we built a simple but robust mathematical formulation for overtopping floods. We used then erosional parameters derived from the study or mountain river incision, and then incorporated a reconstruction for the Mediterranean seafloor geometry. Then we started running virtual floods.

The first results were so surprising that we thought something was probably wrong with the code. Things were happening much faster than in those lake scenarios we were used to. The Mediterranean was filling in only a few years, and a large erosion channel excavated across the Strait of Gibraltar, some hundred meters deep. Unfortunately, we did not know enough about the erodibility of rocks to be able to have conclusive results. But if that was correct, we should be able to find traces of the flood erosion preserved under the sedimentary layers in the strait.

So we turned to previously published research and found two pieces of evidence: The first was a vintage seismic image showing a cross-section of the sedimentary layers near the strait area 3. It showed a clear channel running west to east from the strait into the Alborán Sea, carved in the pre-Messinian sediments. The channel had previously been thought to be the result of river erosion of the dried up strait, but there’s no obvious large river that could have produced that erosion. The second piece of evidence came from cores of rock drilled from the strait area as part of the exploration for the Africa-Europe tunnel project that would build a train connection between Spain and Morocco4. These cores also showed a channel deeper than 200 m, wider than 3 km, and filled with post-Messinian sediment. Altogether, the documented erosion valley connecting the Eastern Atlantic to the Western Mediterranean is more than 200-kilometre long. If this were a result of fluvial erosion, it would be strange to find erosion on both sides of the present water divide between Atlantic and Mediterranean. Furthermore, rather than a waterfall over the Gibraltar Strait as previously suggested, the seismic data show a huge ramp, several kilometres wide descending rather gradually from the Atlantic to the Mediterranean.

With these data, we turned again to the models. Using the observed erosion depth and width as a constrain, the model estimated now that the flood may have began slowly, taking up to several thousand years before a significant rise in Mediterranean level occurred. But importantly they also show that 90% of the water must have entered in a period shorter than two years, and that at the peak discharge, water poured in at a rate of 100 million cubic metres per second, about a thousand times the largest river on Earth today. If ‘harder’ erosion parameters were used, then the refill of the Mediterranean would be predicted to be slower, but the calculated erosion at the end of the flood would be insufficient to reproduce the geophysical images. To fit the observations, the flooding channel had to cut down into the bedrock almost half a metre per day, leading to a large inlet flow that would increase the Mediterranean sea level by more than 10 metres per day.

The technique does not allow constraining the way and speed of the initial stages. This means that the initial trigger may have been a geologically modest event such a large storm, a tsunami, or a partial collapse of the dividing barrier. But the results ensured that in order to account for the final size of the erosion channel, 90% of the water must have been rapidly transferred in a period ranging from a few months to two years.

If these observations and results are independently confirmed, the Zanclean flood would become the largest known flood on Earth’s history. The Zanclean flood involved an order of magnitude more water flow than the megafloods that we know took place during the last deglaciation (e.g., the Missoula floods or the Bonneville flood).

The implications of such a rapid flooding are inevitably big: Global flora and fauna had to adapt to the new environmental conditions rapidly. Marine species colonized a huge new realm rapidly whereas for land species, particularly in islands, the flooded Mediterranean became a sudden barrier triggering speciation. Had the land connection remained, it could have facilitated an earlier arrival of early humans in western Europe. Instead early humans had to take a circuitous route to Western Europe and didn’t arrive until 1.5 million years ago. The Messinian salinity crisis also highlights the importance of seaways in understanding the geological record: straits limit the mix with the global ocean and their size is the key parameter modulating the chemical registry found in sediment. The flood may also have had tectonic implications: The weight of the flooding waters is such that it should have modified the rotation of the Earth, and it should have made the entire Mediterranean region sink by at least one kilometer in the mantle, according to the principle of Isostasy. Also global climate surely must have been impacted by the Messinian salinity crisis and its rapid ending, but so far this is perhaps the most elusive aspect of the crisis, something remarkable since I am not aware of other scenarios in geological history where the climatic response to such a large environmental change can be better tested.

So there are plenty of open questions on the Zanclean Flood that need an answer.

Video on the Atlantropa Project, showing the collapse of a projected dam across the Strait of Gibraltar.