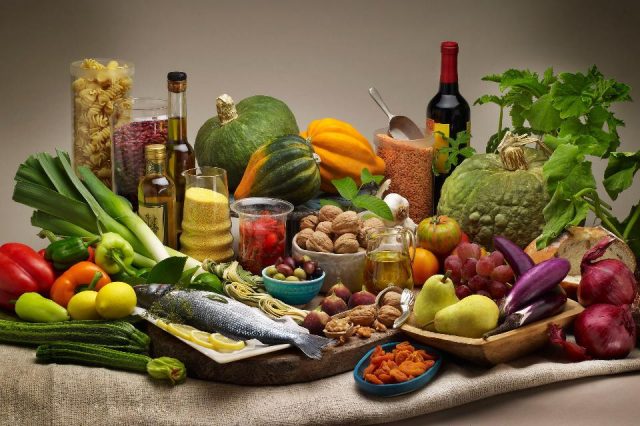 Ageing causes changes to the brain size, vasculature, and cognition. The brain shrinks with increasing age and a shrinking brain is, generally speaking, a brain whose performance and reaction time are declining. This natural loss of nerve cells is different to the much quicker, more severe brain-shrinkage that is caused by diseases like Alzheimer’s. Incidence of stroke, white matter lesions, and dementia also rise with age, as does memory impairment. There are also changes in levels of neurotransmitters and hormones and these structural and biochemical changes must be the substrate for mental malfunctioning. Protective factors that reduce cardiovascular risk, namely a healthy diet, regular exercise, and low to moderate alcohol consumption, seem to aid the ageing brain as does increased cognitive effort in the form of education or occupational attainment. The question is: Is the Mediterranean diet helpful to prevent brain shrinkage? This is what has been answered in a paper authored by Luciano and coworkers that has been published in the journal Neurology in 2017. 1

The authors used the so-called Lothian Birth Cohort of 1936. This cohort comprises 1,091 participants (49.8% women), all born in 1936, in the Edinburgh region of Scotland, most of whom had completed a mental ability test when they were aged 11 years (Scottish Mental Survey of 1947). Throughout their lives, these people had many measures of health status and lifestyle tracked from that early age what helps to effectively investigate long-term cognitive ageing and cognitive epidemiology. The Scottish Mental Surveys, which were undertaken by the Scottish Council for Research in Education (SCRE), are the only attempts to date of any country to measure the cognitive evolution of a complete year-of-birth in its population. By following up the survey participants in old age, the Lothian Birth Cohort studies have provided substantial information related with physical and psychological changes throughout life and what aspects may benefit adequate, healthy aging.

The members of the cohort were aged approximately 70 years at the baseline collection of cognitive and health data for the Neurology study. Dietary data were collected at baseline (wave 1) by postal return of questionnaire in 967 participants: 124 were returned blank or not at all. Approximately 3 and 6 years later—waves 2 and 3—the still-available, able, and willing participants underwent a structural MRI brain scan for gathering of volumetric measures and mean cortical thickness across a 3-year period in older age. Age at first MRI scan was 72.65 (±0.72) years and age at second brain scan was 76.36 (±0.64) years. Cognitive assessments were made at all 3 timepoints; that is, 2004–2007 (wave 1), 2007–2010 (wave 2), and 2011–2014 (wave 3).

The researchers used the food-frequency surveys to divide the cohort responses into two groups: those who at least approximated a Mediterranean-style diet and those who came nowhere close. Even though many in the Mediterranean diet group were far from perfect in their adherence, the average brain-volume loss differed significantly between the two groups. Those whose consumption patterns more closely followed the Mediterranean diet experienced, on average, half the brain shrinkage that was normal for the group as a whole over a period of three years.

It is presently unknown how the Mediterranean diet improves general health. Recent studies have tried to understand whether healthier brain-aging is a function of better vascular health or preserved brain volume, and whether the diet’s advantages lie in its dearth of red meat, the positive effects of the fatty acids in fish or olive oil, or the combined benefits of its vegetal foods (fruits, legumes, olive oil, nuts) 2. Statistical analysis of diet data found that simply eating more fish and less meat was not associated with reduced brain shrinking.

One doubt frequently present in these studies is whether the attributed benefits of the diet are really due to other factors. One example is the well-known relationship between intelligence, education and long-term health: People with certain cognitive strengths do better and stay longer in school and earn more; yes, the better educated and paid may consume healthier diets, but they are generally healthier anyway, so maybe the healthier diet is incidental. The results were the same when researchers adjusted for other factors that could affect brain volume, such as age, education and having diabetes or high blood pressure. The study also finds that subjects across the spectrum of intellect and educational attainment reaped the benefits of the Mediterranean diet in reducing brain shrinkage (or, alternatively, suffered the effects of diets that departed sharply from that diet’s emphasis on plants, fish and polyunsaturated fats). That suggests the researchers are not wrongly crediting subjects’ dietary choices for advantages that may actually stem from other variables such as education.

The brain, just like other parts of our organism, is affected by the way we live our lives. While a Mediterranean diet is one way we can help to maintain a healthy brain, the best available evidence points to a number of other lifestyle factors that may be protective for our brain health. These include not smoking, staying mentally and physically active, no drinking or only drinking in moderation and keeping blood pressure and cholesterol in check.

Glutein-free and casein-free diet in autism