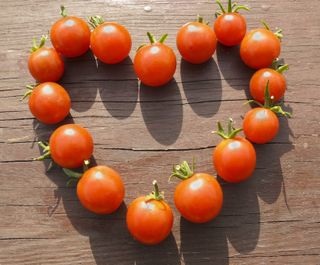 That the so-called “Mediterranean diet” is good to keep a healthy heart is well known. However, how the eating habits of this population help them to stay healthy is not fully understood yet. Researchers from the University of Cambridge in the UK have investigated the effect of lycopene 1, the substance that gives the red colour to tomatoes, in the cardiovascular health.

Lycopene is a carotenoid with a potent antioxidant activity. It is ten times stronger than vitamin E in olive oil and twice as strong as beta-carotene , which is the carotenoid found in vegetables like carrots.

The cardiovascular protection of lycopene as been observed before in vitro studies and in observational studies. In observational studies the eating habits of subjects and its correlation with their cardiovascular health were observed, but no intervention was made. By contrast, the authors of this work performed an interventional study to investigate the effect of lycopene provided in a pill in subjects with pre-existing cardiovascular disease (CDV) and compared it with healthy volunteers (HVs). The lycopene pills where provided by a pharmaceutical company in the UK.

The study was a prospective, randomized, double-blind, placebo controlled, parallel group study comparing the administration of 7 mg of lycopene with placebo. In a prospective study, subjects are followed during a period of time, in this case two months. The study had two parallel arms: patients with CVD or HVs. In each arm, subjects were randomized to either lycopene or placebo (control group), and neither the subjects nor the study personnel knew who was taking the lycopene pill or the placebo. That is what is called double-blind study.

CVD patients and HVs controls were age-matched. CVD patients were on statins, a drug used to lower cholesterol that is used as a preventive medicine in subjects at risk of CVD and which is known to improve endothelial function. Many CVD patients also took other drugs, such as anti-platelets and anti-hypertensives. Table 1 summarizes the demographics of the study.

To evaluate the effect of lycopene in CVD, the authors measured endothelial function. The endothelium (the inner lining of blood vessels) maintains normal vascular tone and blood fluidity and endothelial dysfunction has been shown to be of prognostic significance in predicting vascular events including stroke and myocardial infarction.
Peripheral vascular endothelial function was assessed by venous occlusion plethysmography, which is the gold-standard method of assessing vascular function. This technic provides information about nitric oxide (NO) bioability and is a surrogate marker for risk of developing CVD events. NO reduction is considered the hallmark of endothelial dysfunction. A feature of endothelial dysfunction is the inability of arteries to dilate fully in response to a stimulus that induces release of vasodilators from the endothelium like NO.

Venous occlusion plethysmography measures the rate of arterial inflow into the arm by measuring its initial rate of increase in volume when its venous outflow is suddenly occluded. Arrest of forearm venous return was achieved by inflating a cuff placed around the upper arm to 40 mm Hg and deflating it at short intervals of 3 minutes. The forearm blood flow (FBF) in milliliters per minute was calculated from changes of forearm circumference, which is measured in millimeters per minute by means of a mercury-in-silastic gauge placed around the forearm.

Moreover, this technique allows examining the change in forearm blood flow in response to direct intra-arterial (brachial artery) administration of pharmacological probes. The authors performed local infusion of the following pharmacological probes and measured the difference in FBF by venous occlusion plethysmography:

· NG-monomethyl-L-arginine (L-NMMA), a NO synthase inhibitor.

Acetylcholine is an endothelium-dependent vasodilator that induces release of NO. On the other hand, basal release of nitric oxide in the forearm can be assessed by infusing nitric oxide synthase inhibitor L-NMMA into the brachial artery.

The probes were injected at 1 ml/min in two different concentrations, as it can be seen in the scheme of the protocol in Figure 1.

The results show that CVD patients randomized to lycopene treatment demonstrated improved endothelium-dependent vasodilatation (EDV). After placebo correction, EDV was improved significantly by 53% (95% CI: +9% to +93%, P = 0.03) in the lycopene treated CVD group. No significant differences were seen between lycopene-treated and placebo groups in forearm responses to SNP or L-NMMA (Figure 2). Likewise, no significant changes were noted in FBF responses to ACh, SNP, or L-NMMA in the HV cohort between lycopene and placebo.

The authors also measured other parameters such as arterial stiffness and blood pressure. There were no changes in arterial stiffness between lycopene treated groups and placebo in CVD patients or HVs. Lycopene treated CVD patients achieved reductions in clinic peripheral and central diastolic blood pressure on day 56 compared to day 1, but these changes were not significant when compared to placebo.

In a post-hoc analysis – which consists of looking at the data after the experiment has concluded to look for patterns that were not specified a priori -, EDV responses post-lycopene therapy in CVD patients approximated the EDV responses seen in HVs at baseline (2% lower, 95% CI: 230% to +30%, P =0.85), consistent with the relative improvement in endothelial function seen in the lycopene treated CVD arm (Figure 3). Moreover, another post-hoc analysis showed that there was a significant positive correlation between lycopene concentration and change in EDV response.

The study concludes that lycopene improves endothelial function in CVD patients but not in HVs. How lycopene improves endothelial function is not understood, but it is hypothesized that the antioxidant mechanism of action of lycopene is responsible of this effect. But more research is needed in order to state a conclusion. However, this study emphasizes the need for a healthy diet to improve endothelial function in populations at risk of CVD. Whether a lycopene pill will one day be commercially available to treat CVD is not clear yet. Interestingly, lycopene is found in higher concentrations in cooked tomatoes, such as tomato sauces, than in raw tomatoes. So enjoy some pasta with tomato sauce for your lunch today to help your heart to stay healthy!

Salt and your IQ

From venoms to drugs

Is cancer a side effect of the treatment of cardiac problems in children?

How to regenerate a functional heart using 3D printing