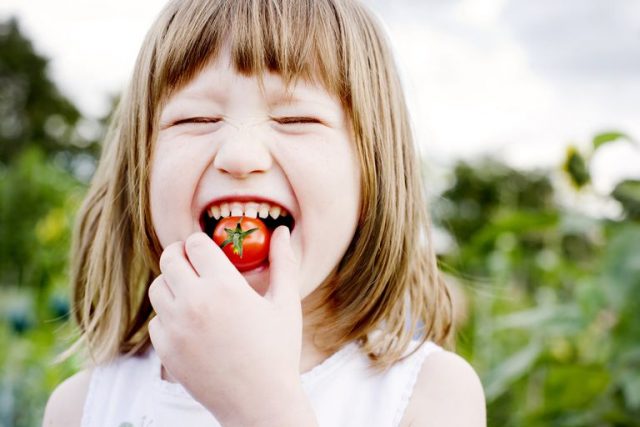 I am sure that all of you have had table conversations about the flavour of tomato fruits: “These tomatoes have no taste” complained the little boy; “When I was a child tomatoes were much better, now they are tasteless” said the grandmother; “The ones I grow in my backyard are hundred times better” stated the brother-in-law; etc.

In this context of familiar and social hopelessness and disappointment, the team of Harry Klee at the University of Florida started an ambitious research project to try to find the lost flavour of tomato fruit. An important outcome of this project was recently published in Science journal in collaboration with researchers from six other research centres of USA, Israel, China and Spain 1.

Postharvest practices, such as collecting the fruits before they are fully ripe and refrigeration, are known to negatively affect flavour. However, even by the use of exactly the same agronomic and postharvest practices, modern varieties have less flavour than their relative ancestors, known as heirloom varieties. Heirloom varieties are overall less uniform, have lower yields and are more susceptible to diseases. Modern varieties have been selected for their resistance to diseases, their high yield and their firmness, which makes fruits to ripen slowly and is essential for their transport. They have not based on their flavour, mostly because analyzing flavour is much more complex and expensive compared to determining yield (Tieman et al., 2017; 2).

Flavour is the sum between taste and olfaction and is given by a complex mixture of compounds. Taste is provided by sugars and acids that activate taste receptors and volatile compounds are responsible for activating olfactory receptors. Both are essential and necessary to get a satisfactory experience eating a tomato. For instance, the refrigeration of tomatoes alters the volatile content of the fruit without altering its sugar content and reduces consumer liking 3.

Tieman et al., (2017) provided what they called a “chemical genetic roadmap”, which is the explanation of some of the steps necessary to help the commercial tomato recover its flavour. In that work, the team of Harry Klee selected and studied 398 modern, heirloom and wild accessions of tomato (Tieman et al., 2017). They analyzed their composition in sugar (glucose and fructose) and acids (citric and malic) together with a total of 27 different volatiles that potentially can affect flavour. Besides, 101 of those accessions were evaluated by consumer panels. The correlation of all the data generated allowed identifying 28 chemicals that were associated with consumer liking and flavour intensity. Moreover, it appeared that 13 flavour-associated volatiles were significantly reduced in modern varieties relative to heirloom varieties. Thus, indicating that the loss of flavour could be attributed to the dilution in volatiles content. Importantly, these traits associated with volatile chemicals seem to be lost at random during multiple selection cycles for fruit size. Thus, this should be correctable by selecting varieties with the proper alleles of genes controlling the synthesis of these molecules (Tieman et al., 2017).

To try to identify those alleles the authors sequenced the genomes of the mentioned 398 tomato population and identified close to two million genetic variations between accessions (single-nucleotide polymorphisms; SNPs). Then, to study whether any of those SNPs were associated with flavour they performed Genome Wide Association Studies (GWAS) and found a total of 251 associations for 20 different traits including the content of sugar and certain volatile compounds. In parallel, a similar study was done in an independent collection of tomato varieties in Israel and also in a population of tomato lines derived from a cross between a modern high-yield variety (line FLA 8059) and a high-flavour low-yield variety (Maglia Rosa Cherry).

Ripe tomatoes produce hundreds of volatiles and their interactions provide the aroma of the fruit, with a direct impact on flavour. Not all those volatiles are positive for flavour. For instance, Tieman et al., (2017) found a genetic locus on chromosome 9 associated with the content of guaiacol and methylsalicylate, which negatively contribute to consumer liking. In that locus, is located the gene named E8, which is the most abundantly expressed gene during fruit ripening 4. Tieman et al. generated antisense lines for E8 and analyzed its volatile compounds observing a different pattern of volatile emission; thus, confirming a potential function of E8 in flavour control. However, the precise mechanism of E8 action remains to be studied.

Regarding sugar content, the authors observed a negative correlation between fruit size and sugar content and with the GWAS identified that an extracellular invertase, named Lin5, was associated with sugar content (Figure 2). The generation of transgenic tomatoes with different alleles of Lin5 and confirmed its role in fruit sugar content

Besides, the authors also identified a number of candidate loci associated with 15 of the chemicals that contribute to consumer liking and 6 chemicals that contribute to flavour intensity. These findings open new avenues for breeding programs to reintroduce those important genes/alleles for fruit flavour that are still in the wild varieties and heirlooms. Moreover, the selection of the desirable alleles could have an important impact in consumer liking without affecting yield, since these volatiles are produced in such tiny amounts that its positive selection is not expected to affect the overall energetic metabolism of fruit. Regarding sugar content, it appears that its increase will have a negative impact on fruit size; nevertheless, consumers are willing to get minimally smaller fruits with better taste and indeed, now many people pay extra to buy plum and cherry tomatoes, which are much smaller but taste better.

Cardiac lycopene – Tomatoes for your heart

How to eat and lose weight

The Higgs boson, the No-Lose theorem and the W(boson)ardrobe