Katy Price is a lecturer in modern and contemporary literature at Queen Mary University of London.

‘We must live before we can attain to either intelligence or control at all. We must sleep if we are not to find ourselves, at death, helplessly strange to the new conditions. And we must die before we can hope to advance to a broader understanding.’ 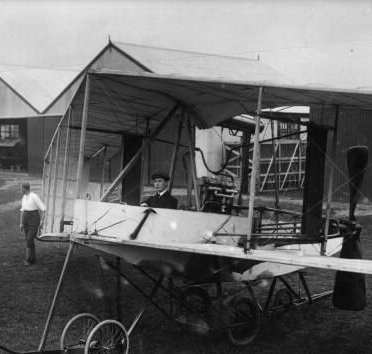 J.W. Dunne (1875-1949) was born on an Army base in County Kildare, Ireland, the son of John Hart Dunne and Julia Elizabeth Chapman. Dunne followed his father into the military, serving as a Sub-Lieutenant in the Second Boer War. He subsequently worked as aeronautical engineer, designing and testing a distinctive series of biplanes during the years leading up to the First World War1. His book on fly fishing, Sunshine and the Dry Fly (1924), was followed by five works theorizing about time and immortality, and two children’s books, The Jumping Lions of Borneo (1937) and An Experiment with St George (1939).

The first of the theoretical works, An Experiment with Time (1927), suggested that each of us may access the future while sleeping, and proposed a theory of ‘serial time’ to account for this capacity. Dunne urged training in dream precognition in order to develop neglected powers of humanity, and to prepare for ‘new conditions’ of the afterlife. Serialism was further articulated in The Serial Universe (1934), The New Immortality (1938), Nothing Dies (1940) and Intrusions (1955). An Experiment with Time and The Serial Universe were reviewed with cautious interest in British science journals such as Nature and Discovery, besides receiving plenty of attention in generalist periodicals and the popular press2 In the wake of such speculative and controversial developments as psychoanalysis and relativity, a strange new theory of time and dreams could not simply be dismissed out of hand. Comment ranged from the enthusiastic to the scathing, while readers of a philosophical persuasion found the infinite regress and reification of time at the heart of Dunne’s theory highly problematic3.

In brief, Dunne proposed that time takes time to pass, so that the unfolding of ‘Time 1’ in our waking consciousness may be measured by an observer in ‘Time 2’, and so on in an infinite series. The series of times was inhabited by a series of observers, a concept illustrated in The Serial Universe by the image of a painter who paints himself painting into the foreground of a landscape, and then paints another picture in which the first picture is included in the scene, and so on4.

Despite its awkward theorizing, heavy-handed expository style, baffling plane diagrams and talk of ‘cerebral substratum’ and ‘diagonal reagent’, An Experiment with Time was immensely popular, and has been frequently reprinted. In part, the book functioned as an antidote to the Einstein sensation: Dunne converted the inaccessible, abstruse fourth dimension of relativity theory into something that any reader might explore in their sleep5. Readers were encouraged to collect examples of their own precognitive dreams, to further corroborate the theory. Dunne’s method of dream recording also restored the unconscious to readers, dismissing the symbolic content of dreams to focus on their literal enactment of past and future events6.

Beyond these consolations, Dunne’s proposals established the reader as a self-experimenting subject, and it is this feature, I argue, that accounts for the enduring popularity of his book. Dunne uses newspapers and novels to show how he came to observe the dream effect in action. Headlines from the Daily Telegraph are included in the text: a report of the successful Cape to Cairo expedition led by Lionel Decle in 1901, and the 1902 eruption of Mont Pelée on Martinique. Dunne’s dreams are the stuff of adventure stories: in the first instance, he dreams that a group of ragged and sunburned soldiers inform him that they have just crossed the continent of Africa, and in the second he himself attempts to save thousands of people from an island volcano. On waking, he reads about his dreams in the Telegraph, and wonders how he can have woken up with memories of the news he is about to read.

Dunne’s military lifestyle and social milieu were inherently adventurous: years later, a dream involving an escaped lion includes elements of a prior discussion with his brother about what guns to take on a lion-shooting expedition, combined with future reading of Hatchways (1916) by Ethel Sidgwick, which features an escaped leopard. Precognition of an element from the novel prompts Dunne to investigate the possibility of accessing the future while awake, and he reports successful glimpses of detail from The Book of the Sword (1884) by R.F. Burton, Julia (1924) by Baroness van Hutten, Arnold Bennett’s Riceyman Steps (1923), The House of the Arrow (1924) by A.E.W. Mason, and The King of Elfland’s Daughter (1924) by Lord Dunsany. These examples give Dunne a connection to his readership as a fellow consumer of popular fiction, across divides of class and occupation. Although the exposition itself quickly becomes dense and abstract, popular entertainment is emphasized as an equally valid means of contact with the truth. Readers could relax in the knowledge that escapism was in fact a way of participating in a grand experiment to help develop humanity’s higher powers.

Stories of the past as promises of the future