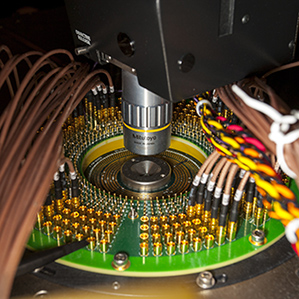 Researchers at IBM’s Almaden Research Center and South Korea’s Pohang University of Science and Technology have developed a phase-change memory chip with more than 900 neurons and 165,000 synapses that can emulate how the human brain functions, promising to advance image-recognition technology and other areas of computing. Previous neuromorphic systems had 100 or fewer synapses to work with, according to IBM.

Through the use of stem cells, researchers have produced a sort of “dementia in a dish” to look into how the disorder develops and affects neurons. They found that induced pluripotent stem cells derived from skin cells of dementia patients were not able to generate cortical neurons, cells affected by frontotemporal dementia. The iPSCs have defective progranulin genes that alter the Wnt signaling pathway, which plays a vital role in neuronal development, researchers found.

A new fanged frog species has been identified in Indonesia, but what makes it unique is that its offspring are born as tadpoles, skipping the egg process altogether, according to research published in PLOS ONE. The tiny Limnonectes larvaepartus is the only one of 6,455 species of frog known to give birth directly to tadpoles.

It took lasers, levitation, and synchrotron X-rays, but scientists now know how a major component of nuclear fuel changes as it melts.

In a provocative new paper, a group of UCLA biologists say that the leading theory for how memory is stored in the brain needs a rethink. But is it really time to throw out the textbooks?