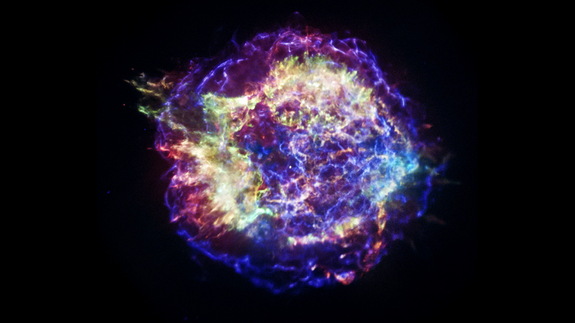 Bubbles of radioactive nickle may have made holes in Cassiopeia A

Expanding bubbles of radioactive nickle may be responsible for holes seen in the supernova Cassiopeia A, which exploded 340 years ago 11,000 light-years from Earth. Researchers say their bubble theory could also account for large rings seen in the outer regions of Cassiopeia A, and their next step is to search for iron deposits left behind by the exploding bubbles.

Ebola virus may be mutating

Scientists have warned that strains of the Ebola virus in Guinea have mutated and they are investigating whether the changes have made it more contagious. There have been several cases in which the patients showed no symptoms.

Chicks, like humans, map numbers spatially with lower numbers to the left and higher numbers to the right. The study suggests that the left-to-right representation of numbers is an innate process rather than a learned behavior, researchers say.

Paleo-Indians, long considered one of the first American peoples, used spear-throwers to propel their spear heads at big game, according to a study of microscopic fractures on spear points. It’s long been assumed that the Paleo-Indians used spear-throwers, but until now, there had been no empirical evidence to support that theory.

Isolated starlings prefer to view photos of other starlings

Lonely starlings in captivity prefer to stare at photos of other starlings versus landscapes or other creatures. Researchers isolated starlings for four days in separate cages with large-screen monitors that would show either a life-size photo of an unknown starling, a suburban landscape or monkeys, depending on which sensor the starling poked with its beak. The starlings more frequently triggered the sensor to bring up the other starling’s photo, suggesting a natural yearning for social interaction.